According to accounts in the Buddhist scriptures, the founder of Buddhism was born to the king of the Shakyas, the people of a small state in northeastern India, about twenty-five hundred years ago. Today, the historical buddha is best known by the appellation Shakyamuni, meaning “The Sage of the Shakyas.”

Siddhartha, as he was named (his family name was Gautama, another name by which the Buddha is often known), grew up surrounded by every comfort and was educated in the customary princely accomplishments of both art and arms. But as a young man he became keenly aware that all people, prince and pauper alike, are subject to the four sufferings of birth, aging, sickness, and death. The ephemeral pleasures of life lost all allure for him as he pondered the problem of suffering and its solution.

At the age of twenty-nine, Siddhartha decided to renounce his princely status and become an ascetic in order to discover the causes of human suffering and the way to overcome it. Leaving his wife and small son, he walked into the forest to begin his quest for truth. He studied with a number of learned teachers, but none could satisfy him completely. He then practiced solitary austerities, but still the ultimate enlightenment eluded him. Finally, he seated himself beneath a bodhi tree and entered a deep meditative state, during which he attained the supreme enlightenment that made him the Buddha, or “Awakened One.” He is said to have been thirty-five at the time.

For the next forty-five years Shakyamuni traveled through north-central India, teaching the roots of suffering and the way to eradicate them and thus liberate people from the cycle of birth and death. He gathered many disciples, who became the core of the sangha, the community of believers. Toward the end of his life, he is said to have delivered a series of sermons that were compiled as the Lotus Sutra. Shortly afterward he passed away at the age of eighty.

The Lotus Sutra and a Set of Fundamental Buddhist Teachings

Many people, especially those from the Judeo-Christian tradition, often ask, “Is Buddhism a religion?” In fact, Buddhism may not appear to be a religion in the usual sense of the word. This is mainly because the founder of Buddhism, Shakyamuni, did not recognize the existence of a transcendent god controlling human destiny, nor did he ever teach belief in a creator deity who presides over the workings of nature, or an absolute being who offers salvation in response to prayer or worship.

Shakyamuni Buddha regarded this universe as resulting from the interaction of causes and conditions which bring all phenomena into being. He awoke to this truth of causation, also called dependent origination. The Sanskrit word for “awakening” is bodhi; therefore, Shakyamuni was called “buddha,” the “awakened one.” The principle of dependent origination serves as a foundation for a set of fundamental Buddhist teachings: The Three Seals of the Dharma, Four Noble Truths, Twelve Causes and Conditions, Ten Suchnesses, Eightfold Path, and Six Perfections.

Shakyamuni imparted a great many teachings during his lifetime, so many that they are often spoken of figuratively as “the eighty-four thousand sermons.” Those teachings were later recorded in sutras, and since ancient times the Lotus Sutra has been widely accepted as supreme among them because of its profound philosophy and high ideals for the universal liberation of humanity from suffering and the attainment of world peace.

What Is the One Vehicle?

A hundred years after Shakyamuni Buddha’s passing, varied understandings of his teachings eventually led to the development of about twenty different branches within the sangha. Several hundred years later, the Buddha’s followers were roughly separated into two opposing traditions: a conservative group and a reformist group. It was in these circumstances that the Lotus Sutra was introduced as an inclusive teaching for both, called the One Buddha Vehicle, or simply One Vehicle.

The concept of the One Vehicle means that all of the teachings of the Buddha are for the purpose of leading all living beings to buddhahood. At the same time, the ultimate meaning of the One Vehicle is that the whole universe is permeated by the Dharma, or Life as the source of all things, and that all living beings are sustained by it and together in their entirety all things comprise a single living entity.

This teaching of the One Vehicle leads us to respect and appreciate one another in the understanding that all beings are precious and indispensable. When the truth of the One Vehicle is fully actualized, this world will achieve a great harmony, and people will overcome all national, racial, and religious differences to accept one another in cooperation toward the betterment of our world.

Rissho Kosei-kai believes that the integral essence of the Lotus Sutra, the One Vehicle, is so universal and practical that it is in fact common to all the world’s religions and is relevant for people everywhere. The Lotus Sutra is a scripture capable of leading humanity from division to unity, from discord to harmony, from conflict to peace, in a word, to the realm of the One Vehicle.

Our Focus of Devotion

Rissho Kosei-kai members put their faith in the Eternal Buddha Shakyamuni who is revealed in chapter 16 of the Lotus Sutra, “The Life Span of the Eternal Tathagata.” He is ever present, everywhere, from the beginningless past into the infinite future, ready to aid and bring relief to all living beings in the universe. He liberates them in such a way that each of them can fully develop and manifest all the magnificent potential they have within themselves.The Eternal Buddha Shakyamuni is actually the omnipresent Dharma, the life-force in the universe that sustains and guides all—human beings, animals, plants, and all other sentient and nonsentient beings. But since the Dharma, which is the source at the root of our being, is invisible and intangible, we cannot perceive it clearly, and therefore can only become aware of it when it manifests in some concrete form.

Siddhartha Gautama, later known as Shakyamuni, was the first human being to awaken to the Dharma and become a buddha in this world. Although we can hardly grasp the Dharma, when we think of it as manifesting in the form of the Buddha, who teaches it to us and regards each of us with compassion, an image forms clearly in our minds. Through the form of the Buddha, we can become aware of the loving power of the Dharma, which is the life-force sustaining all of us.

For Buddhists, it is perfectly natural to signify the Dharma with an image of Shakyamuni Buddha, who appeared in the world and not only preached what became Buddhism but was also a living example of the Buddhist Way. Rissho Kosei-kai refers to him as the Eternal Buddha Shakyamuni—Great Benevolent Teacher, World-Honored One, and members revere this image as their focus of devotion. 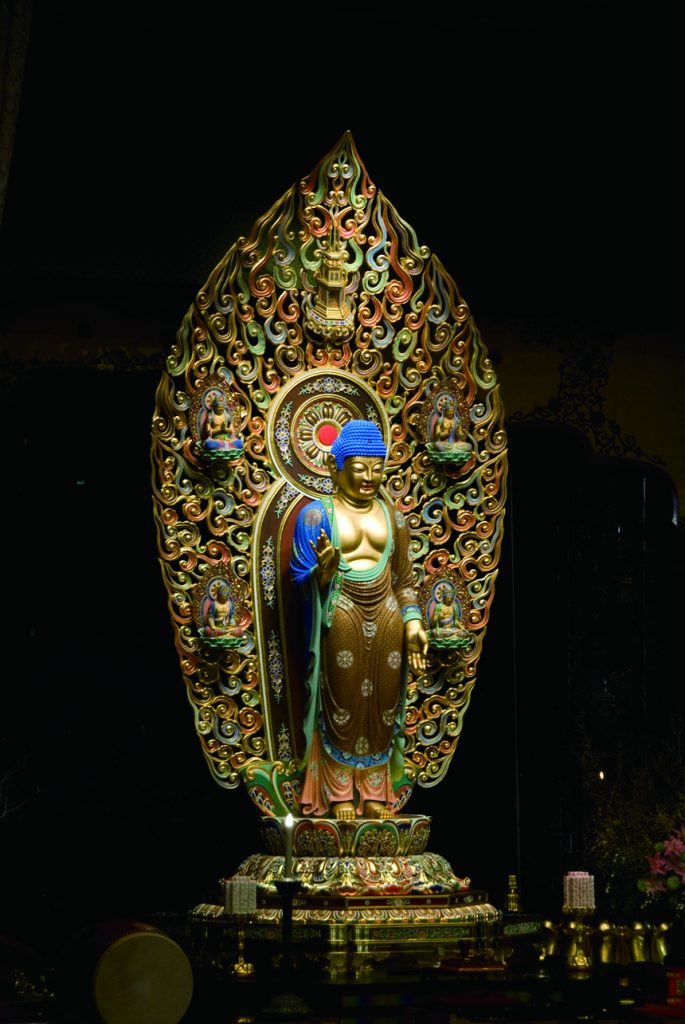