President Nichiko Niwano, the first son of Founder Nikkyo Niwano, was born in 1938. He entered the Faculty of Buddhist Studies at Rissho University in 1958. After graduating from the university’s Graduate School in 1968, he entered Rissho Kosei-kai and held the offices of head of the Dissemination Department and president of the Rissho Kosei-kai seminary.

On November 15, 1991, the birthday of Founder Niwano, he succeeded to the presidency in the ceremony of the Inheritance of the Lamp of the Dharma. Since President Niwano was inaugurated as president, he has continued to disseminate the teachings throughout Japan as well as in other countries. He speaks about the Buddha’s wish for us to devote ourselves to the happiness of others and emphasizes the necessity of enriching our own inner spirituality.

Rev. Niwano firmly believes in walking on the Buddha’s Way side by side with all the members of the Sangha. He called them to join with him as follows: “Putting our faith in the abilities inherent in everyone, I hope that we ourselves will steadily take steps forward as bodhisattvas, while, by extension, making efforts to help raise as many bodhisattvas as possible.”

President Niwano is a president of the World Conference of Religions for Peace (WCRP/RfP) and a president of the Asian Conference on Religion and Peace (ACRP). He has been vigorously active in interreligious cooperation with the WCRP and other organizations. His writings published in English include Cultivating the Buddhist Heart; Modern Meditations; The Inward Path; and My Father, My Teacher. 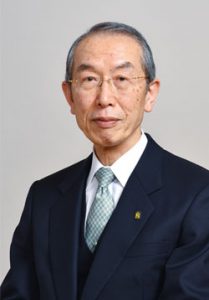 President-designate Kosho Niwano, the eldest daughter of President Nichiko Niwano, was born in Tokyo. After receiving a law degree from Gakushuin University in Tokyo, she studied at Rissho Kosei-kai’s Gakurin Seminary.

At present, Rev. Niwano devotes herself to sharing the teachings of the Lotus Sutra with leaders both in Japan and overseas as well as with the members who visit Rissho Kosei-kai’s headquarters in Tokyo for worship services and special events from all parts of the world. In order to understand the problems and suffering people face, she has visited needy countries in Asia and Africa

The president-designate also actively promotes interreligious cooperation, currently serving as co-moderator of Religions for Peace (RfP) International, and a member of the Board of Directors of KAICIID (King Abdullah Bin Abdulaziz International Centre for Interreligious and Intercultural Dialogue).

Rev. Niwano published her first book in English, The Buddha in Everyone’s Heart, in 2013. 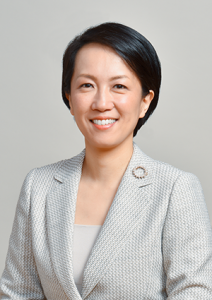 The founder of Rissho Kosei-kai, Mr. Nikkyo Niwano, was born in 1906 in northern Japan. In 1938 he founded our lay Buddhist organization with Mrs. Myoko Naganuma and some thirty members in Tokyo. Their purpose was to liberate people from suffering and establish a peaceful world by disseminating the true Dharma of the Lotus Sutra.

Believing that all religions derive from the same source, Founder Niwano dialogued with people of faith from the world over in order to further the cause of world peace through interreligious cooperation. In 1970 he held first the World Conference on Religions and Peace (WCRP/RfP) with religious leaders throughout the world. Rev. Niwano was also a strenuous advocate of disarmament and called for world political leaders to take steps to abolish nuclear weapons in the United Nations Special Sessions for Disarmament.

In 1979 Rev. Niwano was awarded the Templeton Foundation Prize for Progress in Religion. In 1992 he was made Knight Commander with the Silver Star of the Order of St. Gregory the Great by the Vatican.

Founder Niwano passed away on October 4, 1999, at the age of 92. The following year, the Precious Stupa of the One Vehicle was constructed at Rissho Kosei-kai headquarters in Tokyo, dedicated to the memory of Founder Niwano. The stupa takes its name from the founder’s posthumous Dharma title, “Founder Nikkyo, Great Teacher of the One Vehicle.” 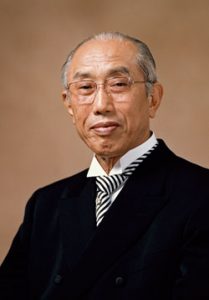 Cofounder Myoko Naganuma was born on December 25, 1889, in Saitama Prefecture, north of Tokyo. Once Rev. Nikkyo Niwano introduced her to the Buddha Way, Rev. Naganuma devoted the rest of her life to the faith, working and praying for the happiness of others. After Rev. Niwano established Rissho Kosei-kai together with her and some thirty members in 1938, Rev. Naganuma helped lay its foundations as vice-president for the first twenty years of the organization’s early days. Through her dedicated guidance in the faith, Rev. Naganuma always gave members throughout Japan great strength and hope to face life.

Even in the chaotic turmoil during and after World War II, Cofounder Naganuma devoted her life to always practicing the teachings of the Lotus Sutra in earnest. She demonstrated the importance of rendering service to others through the bodhisattva way, no matter the circumstances one faced. She also rescued people suffering from dire poverty, incurable illnesses, or domestic discord, and guided them to the Buddha’s Way.

With the wish that everyone would extend small acts of kindness to others in order to help make the world a better place, Cofounder Naganuma was also dedicated to social service activities. Whenever a natural disaster occurred she was quick to lead Rissho Kosei-kai members in working to distribute relief supplies to victims in the areas of devastation. The deep compassion she demonstrated in her attitudes and behavior was a great inspiration for members in the organization’s early days and helped them develop firm faith. 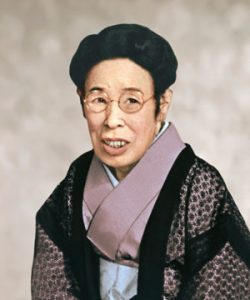