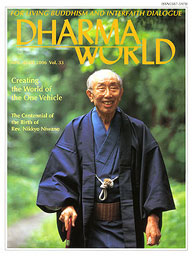 Creating the World of the One Vehicle: The Centennial of the Birth of Rev. Nikkyo Niwano

This year, as the centennial year of the Founder’s birth, is a memorable one for Rissho Kosei-kai. But I believe that, as we plan and undertake the various public memorial celebrations, there is something else that must not be forgotten. . . .

Katsunori Yamanoi is the chairman of the board of directors of Rissho Kosei-kai.

Living with a Generous Heart: Greeting the Centennial of the Founder’s Birth by Nichiko Niwano

In Gratitude for Their Guidance by Nikkyo Niwano

As I look back on my life, I am deeply aware that I must be one of the most fortunate men alive. Through the wonderful workings of karma, though born deep in the mountains of Niigata Prefecture, I have come into contact with many people whose help has been invaluable to me. And today I am able to walk, hand in hand, with millions of fellow believers as we move forward together. . . .

In Memory of the Reverend Nikkyo Niwano by Chiara Lubich

When the history of the dialogue among religions is written, one of the eminent figures to emerge will be the founder of Rissho Kosei-kai.

Chiara Lubich is founder and president of the Focolare Movement, the worldwide Catholic movement that has members and friends in over 180 countries. She received the Templeton Foundation Prize for Progress in Religion in 1977.

Founder Niwano: A Pioneer for Peace by Jimmy Carter

A former president of the United States recalls his first meeting with Rissho Kosei-kai’s founder in 1979, and how over time they enjoyed a great friendship stimulated by their personal differences.

The presence of Pope John Paul II at the opening ceremony of the Sixth World Assembly of the WCRP in the Vatican was the fulfillment of a dream for Rissho Kosei-kai’s founder.

Archbishop Michael L. Fitzgerald, newly appointed as the apostolic nuncio in Egypt and the Holy See’s delegate to the League of Arab States, had served as president of the Pontifical Council for Interreligious Dialogue. He was also the director of the Pontifical Institute for Arabic and Islamic Studies in Rome for many years.

The Lotus Sutra and Religious Cooperation by Gijun Sugitani

Contemporary Religion and Social Crisis in Japan by Robert Kisala

The emergence of new religious movements in Japan can at least in part be attributed to the great social change, even social crisis, associated with the process of modernization.

Robert Kisala is a professor in the Faculty of Humanities at Nanzan University, Nagoya. He has written extensively on new religious movements in Japan, including Prophets of Peace: Pacifism and Cultural Identity in Japan’s New Religions, a study of religious involvement in the peace movement in Japan.

The One Vehicle and Bodhisattva Never Despise

The Founder’s worldview was that the self and others are one and interrelated, so acting out in violence toward others is also acting out against oneself.

Michio T. Shinozaki, currently president of the Gakurin seminary of Rissho Kosei-kai, formerly served as the director of the organization’s General Secretariat. He received a Ph.D. in Religious Studies from Vanderbilt University in 1988.

The Founder and the Second Vatican Council by Kinzo Takemura

In 1965, Rissho Kosei-kai was not yet on special terms with the Catholic Church. The invitation to Founder Niwano to attend could only have been because it was the will of God and the Buddha.

Our Encounters with the Founder

On these pages appear comments by members of Rissho Kosei-kai overseas that describe how their encounters, either direct or indirect, with Founder Nikkyo Niwano have influenced their lives and have enabled them to understand Buddhism, especially the teachings of the Lotus Sutra. The place names below the respective writers’ names represent the Rissho Kosei-kai branches to which they belong.

A Lifetime Devoted to the Dharma and World Peace

The Founder’s Life: A Chronological Record

A Christian Journey into Buddhism by Elizabeth J. Harris

Buddhism starts with a question: Why is there something in human existence that is twisted, out-of-shape, violent, and unsatisfactory? This writer says that this is a question that resonated with her immediately.

Elizabeth J. Harris is the secretary for interfaith relations for the Methodist Church in Britain and an honorary lecturer at the University of Birmingham. This essay is based upon a lecture she delivered before the Horsham Inter Faith Group, England, in May 2005.

Who Can Stop the Wind? by Notto R. Thelle

When Kobo Daishi (774-835), one of the great masters of Japanese intellectual history, renounced the power and luxury of the court and its bureaucracy and set out on his wanderings as a homeless monk, his family and friends thought he had gone mad, and they protested loudly. His reply was simple: “Who can shatter my resolve? Who can stop the wind?” These words were more than just an appropriate metaphor for an irrevocable choice–they described a whole way of life. Kobo Daishi was whirled up out of the secure framework of his life, and he let himself be carried along by the wind. He had seen all too clearly the emptiness of the “good life” and he knew that he could find a more authentic life only if he encountered reality without any protective clothing. He could perhaps have drowned out this call and shut out the wind, but he knew that it would just keep on blowing. As a man of the spirit, he had no other choice. . . .

Notto R. Thelle, D.Th., is a professor in the Faculty of Theology, the University of Oslo, Norway. Having studied Buddhism at Otani University in Kyoto, he acted as associate director of the NCC (National Christian Council) Center for the Study of Japanese Religions in Kyoto 1974-85, where he was a visiting scholar 1999-2000. He is the author of numerous books and articles. This essay is a translation of part of his book, which was published in Norwegian.

Stories of the Lotus Sutra

This bodhisattva can be understood to be teaching the Lotus Sutra not so much by words as by embodying it by taking on whatever forms are needed to help others.