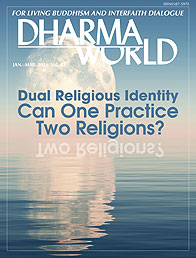 Questions about dual religious identity are common today in Western countries where some people embrace more than one religion.

In many big cities with multiethnic, multicultural, and multireligious communities, people of different backgrounds live and work together. Encounters with other religions can improve our spiritual well-being, and another religion can become as important to us as the one we grew up with. Children of parents from different ethnic, cultural, and religious backgrounds might grow up with dual religious identity.

Questions can arise about the faith of someone who practices two religions. What are other ways people acquire dual religious identity? How can one believe or practice two different faiths, especially if some of their doctrines are contradictory? Might not this require diluting or cherry-picking the teachings of two religions, resulting in a bricolage? How can one conduct the rituals of two different religions in daily life?

Many Japanese joke that as infants they are initiated into Shinto, grow up to have Christian weddings, and die as Buddhists, with these three religions providing rites of passage. Beyond this sort of ritual borrowing from other traditions, can one fully embrace two religions at the same time, such as Christianity and Buddhism, Christianity and Judaism, or Hinduism and Buddhism? Studying and practicing a second religion often gives us fresh insights into our first religion. Can dual religious identity also be a path to salvation or spiritual liberation? We will explore these possibilities as part of today’s emerging religious trends.