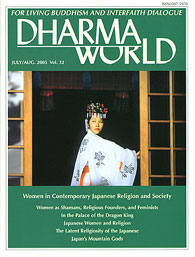 Women as Shamans, Religious Founders, and Feminists by Susumu Shimazono

Susumu Shimazono is a professor in the Department of Religious Studies of the University of Tokyo. His special fields are the comparative study of religious movements and the history of religion in modern Japan. He has also taught as a guest professor at universities in the United States, France, and Germany. His recent publications include “Iyasu chi” no keifu (The Genealogy of “Healing Wisdom”) and Posutomodan no shin shukyo (Postmodern New Religions).

In the Palace of the Dragon King by Christal Whelan

The exception to the rule of institutional exclusion of women in Japanese religion seems to be the new religious movements, this scholar says, where some women managed to actualize their visions of a more inclusive world.

Christal Whelan is currently an Earhart Fellow at the Institute on Culture, Religion, and World Affairs at Boston University, where she is also completing a Ph.D. in cultural anthropology. She was a Fulbright Fellow to Japan from 2003 to 2005 while affiliated with the International Research Center for Japanese Studies, in Kyoto. In 2000 she trained at Mount Koya’s Niso Gakuin, where she was ordained in the Shingon tradition. She has published numerous articles and a book in the field of Japanese religion and culture.

A teacher at a women’s university believes that the simplicity of her young students–a quality that goes beyond unaffectedness or earnestness–is what should truly be called “spiritual.”

Fumiko Nomura, a professor at Kawamura Gakuen Women’s University, specializes in American religious history. She is also on the board of directors of the International Institute for the Study of Religions, and has translated Jerald C. Brauer’s Protestantism in America: A Narrative History into Japanese.

The Latent Religiosity of the Japanese by Emiko Namihira

There are many who have awakened to the fact that people cannot be fulfilled through living for themselves alone but are fulfilled by helping other beings.

Jun’ichiro Ishikawa, professor emeritus of Tokoha Gakuen Junior College, in Shizuoka Prefecture, serves on the boards of directors of Shizuoka Prefecture’s Folklore Society and Society for Conservation of Cultural Properties. He is the author of Kappa no sekai (The World of Kappa [Water Sprites]) and other works, and coauthor of Nihon shukyo no fukugo-teki kozo (The Composite Structure of Japanese Religion).

Toward a Global Ethic by Hans Kung

The 22nd Niwano Peace Prize was awarded to the Roman Catholic theologian Dr. Hans Kung, president of the Global Ethic Foundation in Germany and Switzerland. Together with his contributions to interfaith dialogue and cooperation, Dr. Kung’s advocacy of a “Global Ethic” as a way of realizing world peace has won him recognition around the world. The prize was presented in Tokyo on May 11.

Living by the Precepts by Nichiko Niwano

Buddhists have the Six Perfections and observance of the five precepts as the standards of daily life. We are taught to live by the Buddha’s precepts. Why is keeping those precepts important?

Nichiko Niwano is president of Rissho Kosei-kai and the Niwano Peace Foundation, a president of the World Conference of Religions for Peace (WCRP), and chairman of Shinshuren (Federation of New Religious Organizations of Japan). This article is a translation of a recent interview with Rev. Niwano that originally appeared in Rissho Kosei-kai’s Japanese periodical Yakushin.

The Tranquil Realm of Nirvana by Nikkyo Niwano

It is significant that this bodhisattva tells everyone he meets, including those who are arrogant, angry, disrespectful, and mean-spirited, that they are bodhisattvas.

Gaynor Sekimori, a specialist in the history of Japanese religion, is a long-term practitioner of Shugendo at Mount Haguro. She received her Ph.D. from the University of Cambridge with a study of Haguro Shugendo and is presently an associate professor in the Institute of Oriental Culture at the University of Tokyo, where she also acts as the managing editor of the International Journal of Asian Studies (Cambridge University Press).

A Leadership of Openness and Interreligious Dialogue: A Visit with His Holiness Pope John Paul II by Ignacy-Marek Kaminski

In the author’s student days in Krakow, Poland, the young Cardinal Karol Wojtyla, the future Pope John Paul II, served as a spiritual counselor. Professor Kaminski, now a permanent resident of Japan, met the ailing pope in his Vatican apartment in January, with his two Eurasian children. He believes that the late pope’s legacy of open leadership and interreligious dialogue will long live in people’s hearts.

Ignacy-Marek Kaminski is a visiting professor of ethnology and cultural anthropology at Warsaw University. Dr. Kaminski, now a Swedish citizen, has also been a member of the Swedish Writers Union since 1984: his works are published in nine languages. His latest work is “Applied Anthropology and Diplomacy,” in The Psychology of Diplomacy, Harvey J. Langholtz & Chris E. Stout, eds. (Westport, CT: Praeger, 2004).

The Beginnings of Deification (1) by Hajime Nakamura

In outward form, Sakyamuni was no different from other bhikkus. Later depictions of him with beautiful hair and a halo, surrounded by disciples, were errors in terms of historical truth.

The Sutra of the Lotus Flower of the Wonderful Law
Chapter 10: A Teacher of the Law (2) by Nikkyo Niwano

This is the eighty-third installment of a detailed commentary on the Threefold Lotus Sutra by the late founder of Rissho Kosei-kai, Rev. Nikkyo Niwano.