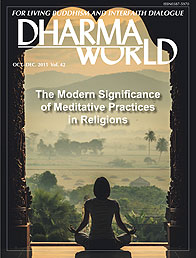 The Modern Significance of Meditative Practices in Religions

Meditation in the Contemporary World by Dominick Scarangello

Dominick Scarangello, PhD, specializes in early-modern and modern Japanese religions. He has taught at the University of Virginia and was the Postdoctoral Scholar in Japanese Buddhism at the Center for Japanese Studies, University of California, Berkeley (2013-14). Currently, he is an international advisor to Rissho Kosei-kai.

In the modern world we find popular movements engaging either Buddhism or Christianity and sometimes uniting them in ways that are both questionable and inspiring.

Peter Feldmeier, PhD, holds the Murray/Bacik Endowed Chair of Catholic Studies at the University of Toledo, Ohio. He has written extensively on Christian spirituality, mysticism, comparative theology, and Buddhist-Christian dialogue. The author of seven books, among his most recent are Encounters in Faith: Christianity in Interreligious Dialogue (Anselm Academic, 2011), Dhammapada: The Way of Truth (Buddhist Publication Society, 2013), and Christian Spirituality (Anselm Academic, 2015). His forthcoming book is The Christian Tradition (Oxford University Press, 2016).

Meditation without Borders: Christians Who Engage in Meditation Practices from Other Religious Traditions by Leo D. Lefebure

For many Christians, the practice of meditation has led to a renewal of their faith and practice.

Leo D. Lefebure is the Matteo Ricci, SJ, Professor of Theology at Georgetown University in Washington, DC. He is the author of numerous works, including True and Holy: Christian Scripture and Other Religions. He is also the co-author with Peter Feldmeier of The Path of Wisdom: A Christian Commentary on the Dhammapada. He is an honorary research fellow of the Chinese University of Hong Kong and a Trustee Emeritus of the Council for a Parliament of the World’s Religions.

The Development and Significance of Meditation in Buddhism by Kenryo Minowa

When, during meditation, we experience a state in which there is no judging, comprehending, or discriminating (the state of nondiscriminative wisdom), a feeling of great joy arises in our mind, and we could even say that the barriers between ourselves and others fall away.

Kenryo Minowa, PhD, is a Professor in the Graduate School of Humanities and Sociology, the University of Tokyo. Prior to 2010, he served as a Professor in the Faculty of Letters at Aichi Gakuin University. He received his PhD in literature from the University of Tokyo in 1999. His fields of specialization are Indian literature, Indian philosophy, and Buddhist studies. He was awarded the Hajime Nakamura Award in 2000. Dr. Minowa has authored and translated many books on Buddhism.

An individual who . . . engages in a sustained way in a form of Buddhist meditation or Christian contemplation . . . is launched into a winding path of awakening and transformation, with surprises at every turn.

Regulating Our Breathing by Nichiko Niwano

Nichiko Niwano is president of Rissho Kosei-kai and an honorary president of Religions for Peace. He also serves as an advisor to Shinshuren (Federation of New Religious Organizations of Japan).

When the modern generation marginalized religion, and in some cases even threw out religion from their lives completely, they therewith also threw out the comprehensive definition of the human being, and with that they lost the comprehensive knowledge of how to live appropriately.

Dr. Kamar Oniah Kamaruzaman is an Associate Professor in Comparative Religion at the International Islamic University of Malaysia. She is also a social activist and resource person, particularly in Islamic and interfaith work, and heads a number of NGOs. She participates in numerous forums locally and internationally, including those conducted by the United Nations and UNESCO. She has also published numerous books and academic papers, some of which are now reference texts.

Park Kwangsoo is a Professor in the Department of Won-Buddhism at Wonkwang University, Iksan, South Korea. He serves as the director of the Research Center of Religions at Wonkwang University and as vice president of the Korean Association for the History of Religions and has also worked for religious dialogue and peace movements. He received his PhD in Buddhist Studies from the University of Wisconsin-Madison. He is the author of several books and articles on interfaith dialogue and religions in Korea.

Engaged Buddhism arose . . . out of the anti-war movement led by monks during the Vietnam War. Witnessing the destruction and suffering the war had brought his country, Thich Nhat Hanh called for positive social engagement based on adapting Zen meditation to modern needs.

Ranjana Mukhopadhyaya specializes in sociology of religion and Japanese religion. She is an Associate Professor at the Department of East Asian Studies, University of Delhi, teaching Japanese society, culture, and language. She received her doctorate in Religious Studies from the University of Tokyo in 2003 and has taught as an Associate Professor at Nagoya City University. She is the author of Nihon no shakai sanka bukkyo [Engaged Buddhism in Japan] (Toshindo, 2005).

The Ome Retreat Center and the Youth Department by Nikkyo Niwano

The Sutra of the Lotus Flower of the Wonderful Law Chapter 25: The All-Sidedness of the Bodhisattva Regarder of the Cries of the World (1) by Nikkyo Niwano

This is the 122nd installment of a detailed commentary on the Threefold Lotus Sutra by the founder of Rissho Kosei-kai, Rev. Nikkyo Niwano.