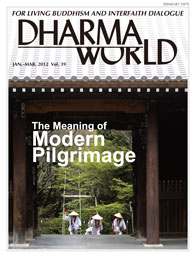 The Meaning of Modern Pilgrimage

Participants must work together and cooperate, their minds becoming as one, as reflected in the phrase “many in body, but one in spirit.”

Keiko Yamao is head of the Pilgrimage Group of the Dharma Missions Bureau of Rissho Kosei-kai in Tokyo.

Buddhism, the Shikoku Pilgrimage, and Wandering Saints in Japan by Ian Reader

Until the twentieth century, the only way to do the pilgrimage was by foot, but as Japan modernized and developed increasingly efficient transport systems, the options for pilgrims broadened. There is no stipulated rule that says that pilgrims should walk, and Shikoku pilgrims have always made use of whatever means could enable them to make the pilgrimage in the ways they wished.

Ian Reader is a professor of Japanese Studies at the University of Manchester in the United Kingdom. Upon obtaining his PhD on Japanese Buddhism in 1983, he moved to Japan and traveled extensively around the country. In 1984 he made the nine-hundred-mile Shikoku pilgrimage in forty days. After that he served in academic posts at universities in the United States and Europe. He is continuing his research on the study of religion, with a particular focus on Japan.

Pilgrims Are Seekers by Juan Masiá

Pilgrims are seekers searching for the transcendent. And seekers are pilgrims, because they are in search of the ultimate or absolute.

Juan Masiá was previously a professor of Christian ethics and the history of philosophical anthropology in the Faculty of Theology at Sophia University, Tokyo, where he is now a professor emeritus. In 2008 he published a Spanish translation of the Threefold Lotus Sutra. He also serves as a special fellow of the Peace Research Institute affiliated with the Japanese Committee of the World Conference of Religions for Peace.

Not all of the modern-day pilgrims are Anglicans; many of them are Roman Catholics, and some these days are Buddhists. Some may not have any particular spiritual beliefs.

Peter Kenny writes on religion and other matters through an international prism from Geneva. Until December 2010 he was editor-in-chief of Ecumenical News International. Under Kenny, ENInews was in 2010 awarded the Associated Church Press award as the top news agency covering religion. He worked for Agence France-Presse in southern Africa for five years. This was followed by nine years in Europe and Asia with United Press International, where he served as its Tokyo bureau chief until he left the wire service in 1999.

Pilgrimage, I would suggest, has the power to unite people of different religions because it deals in the affective, in what is connected with the emotions.

Elizabeth J. Harris is a senior lecturer in the comparative study of religion at Liverpool Hope University. From 1996 to 2007, she was the executive secretary for interfaith relations for the Methodist Church in Britain. Dr. Harris has been involved in Buddhist-Christian encounter for more than twenty years and serves as president of the European Network of Buddhist-Christian Studies. Her latest book is Buddhism for a Violent World (London: Epworth Press, 2010).>

The World Shall Come to Walsingham by Gaynor Sekimori

The modern reconstruction of Walsingham began in the middle years of the nineteenth century, a product of Victorian romanticism and antiquarianism and, more important, nostalgia for the medieval Catholic past within certain Anglican circles.

Gaynor Sekimori is a research associate in the Centre for the Study of Japanese Religions at the School of Oriental and African Studies, University of London, and concurrently visiting professor at Kokugakuin University, Tokyo. She received her doctorate from the University of Cambridge in 2000. She was managing editor of the International Journal of Asian Studies (Cambridge University Press) and a member of the Institute of Oriental Culture at the University of Tokyo from 2001 to 2007.

Revering Ourselves by Nichiko Niwano

Only Dialogue Can Change the World An interview with Alberto Quattrucci

Alberto Quattrucci is the secretary-general of International Meetings Peoples and Religions, the Department of the Community of Sant’Egidio for Interreligious Dialogue. Sant’Egidio is a Rome-based worldwide Catholic lay organization recognized by the Vatican. The community is involved in a wide range of peace activities, including the mediation of armed conflicts, care for the elderly and homeless, and relief for disaster victims worldwide. Professor Quattrucci visited Rissho Kosei-kai headquarters in Tokyo in June 2011 before a fact-finding tour in northeastern Japan, where nearly twenty thousand people had died in the March earthquake and tsunami. Dharma World interviewed him and asked him how people of religion can promote world peace and help people around the world overcome their hardships.

Bearing Witness as an Atomic Bomb Victim by Akiyo Hada

I have come to realize that the reason I was the only person in my family to survive the bombing was so that I could live to bear witness to the bombing.

Akiyo Hada is a member of the Hiroshima Dharma Center of Rissho Kosei-kai.

The Zen of Mutual Acceptance and Respect by Jikisai Minami

I find that if I listen quietly and patiently to what the other person is saying over an extended period of time, his or her words may catch my heart.

Jikisai Minami was born in Nagano Prefecture in 1958. After graduating from Waseda University in Tokyo and working at a major department store, in 1984 he took his orders as a Soto Zen Buddhist monk. He trained at Eiheiji in Fukui Prefecture and is now head priest of Reisenji in Fukui City and deputy head priest of Osorezan Bodaiji in Mutsu, Aomori Prefecture. His numerous books include “Toi” no mondo: Do jidai zenso taidan (Dialogue between contemporary Zen monks) and Kataru zenso (The speaking Zen monk).

Good Encounters Give Us New Life by Koitsu Yokoyama

Deep mind contains the seeds of love for others and the desire to make them happy. To encourage the growth and development of these potential forces, you have to pursue positive encounters actively. . . . That is why we put others first and ourselves last.

Koitsu Yokoyama is a professor emeritus in the College of Arts of Rikkyo University, Tokyo. His main area of research is the Yogacara (Consciousness Only) tradition of Mahayana Buddhism. He is the author of numerous books on Buddhism, including(What is Yogacara?) and Jugyuzu nyumon: Atarashii jibun eno michi (An introduction to the Ten Ox-Herding Pictures: A path to a new self).

Japanese Buddhism and Christian “Good News”: A Christian Reflection on Aspects of the Buddhist Approach to Reality by Cinto Busquet

Being faithful to one’s own religious convictions and at the same time remaining radically open to the other’s truth – this is what assures that together we may experience a deeper presence of God, the Ultimate Truth.

Cinto Busquet, born in Catalonia in 1961, was ordained a Catholic priest in 2001. He received a theology doctorate from the Pontifical Lateran University in Rome in 2008 and has taught fundamental theology at the Pontifical Urbaniana University in Rome. He lived in Japan from 1987 to 2003. As a member of the Focolare Movement, he has been engaged in interreligious activities for many years.

The Sutra of the Lotus Flower of the Wonderful Law Chapter 19: The Merits of the Teacher of the Dharma (2) by Nikkyo Niwano

This is the 107th installment of a detailed commentary on the Threefold Lotus Sutra by the founder of Rissho Kosei-kai, Rev. Nikkyo Niwano.