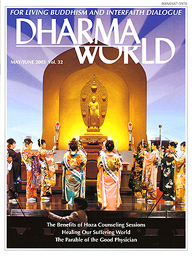 Kinjiro Niwano is chairman of the Niwano Peace Foundation.

A Taiwanese Buddhist nun who established a compassion relief foundation nearly four decades ago has seen it grow into a worldwide volunteer organization that assists victims of disasters like the earthquake and tsunami in South Asia last December.

Venerable Master Cheng Yen was born in Chingshui, a small town in central Taiwan, in 1937. When she was twenty-three years old, she left home to become a Buddhist nun. In 1966, she established the Buddhist Compassion Relief Tzu Chi Foundation, which has concentrated its activities in the four major missions of charity, medicine, education, and culture. The foundation, which now has over four million supporters, provides disaster relief throughout the world, sending supplies to victims and dispatching volunteers to help them rebuild their lives.

Karma and Character: Fatalism or Free Will? by I. Loganathan

The Buddha found that the theory of karma was often confused with fatalism, but he turned the message of despair into one of hope. He encourages the sinner to realize that it is never too late to mend.

I. Loganathan is honorary president of the Buddhist Society of India and of the Gautama Buddhist School, Karnataka State, India.

The Emerging Euroyana by Michael Fuss

As Buddhism gains widening acceptance as a European religion, new questions are raised about whether its presence will be lasting, and about the resulting dialogue with the Roman Catholic Church.

Michael Fuss is a professor at the Pontifical Gregorian University, Rome. After ordination as a Catholic priest, Dr. Fuss specialized in Buddhist studies and today is engaged in Buddhist-Christian dialogue and is a member of the International Buddhist-Christian Theological Encounter Group. Among his publications is Buddhavacana and Dei Verbum (Leiden: Brill, 1991), a comparative study of scriptural inspiration in the Lotus Sutra and the New Testament. This article is adapted from an article that originally appeared in The Way (Vol. 41, 2001), a journal for contemporary Christian spirituality published by the Jesuits in Britain.

The Real Purpose of Prayer by Kinzo Takemura

It might be wise when we pray to recognize that we may be treating the Buddha as a mere means to attain our own desires.

The Benefits of Hoza Counseling Sessions by Nichiko Niwano

Anxiety over human relationships is the main source of stress among people in the workplace and the community as a whole. In an attempt to alleviate that stress, companies and schools often have professional counselors available, and more and more people are seeking their help. We seem to have lost the knack for human relationships.

Nichiko Niwano is president of Rissho Kosei-kai and the Niwano Peace Foundation, a president of the World Conference of Religions for Peace (WCRP), and chairman of Shinshuren (Federation of New Religious Organizations of Japan). This article is a translation of a recent interview with Rev. Niwano that originally appeared in Rissho Kosei-kai’s Japanese periodical Yakushin.

The Precept Against Killing and Acting Against Violence by Nikkyo Niwano

The Parable of the Good Physician by Gene Reeves

The heart of the second half of the Lotus Sutra contains a parable about a wise physician who used skillful means to heal his poisoned children. We are those sick children, and the Buddha is the wise father who uses every means available to save us. We must learn not only how to see the Buddha in others, but also how to let others see the Buddha in us.

The Dharma Taught Me Self-Reliance and Equality by Pradeep Saksena

An Indian travel agent describes how his curiosity about Japanese Buddhism led to his visiting Tokyo and discovering the bodhisattva practice of Rissho Kosei-kai.

Pradeep Saksena is the director of the Delhi Dharma Center of Rissho Kosei-kai in the Indian capital.

The Buddha’s Teachings Save the Children

The mother of an elementary-school boy who was then nine years old describes her personal experience with one of his classmates who was seen as the main cause of the chaos that was disrupting school for everyone.

Harumi Ogawa is a member of the Minami-Tama Branch of Rissho Kosei-kai in Tokyo.

Venerated as a Human Being by Hajime Nakamura

Early Buddhists looked up to Sakyamuni as a great teacher who had been able to control his own passions. He exemplified the ideal of human existence.

The Sutra of the Lotus Flower of the Wonderful Law
Chapter 10: A Teacher of the Law by Nikkyo Niwano

This is the eighty-second installment of a detailed commentary on the Threefold Lotus Sutra by the late founder of Rissho Kosei-kai, Rev. Nikkyo Niwano.