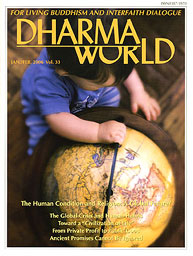 The Human Condition and Religion: A Global Future?

The Global Crisis and Human Hubris by Tsuneya Wakimoto

Tsuneya Wakimoto, professor emeritus at the University of Tokyo, acts as chairman of the board of directors of the International Institute for the Study of Religions. He is the author of Shukyogaku nyumon (An Introduction to Religious Studies), Shi no hikaku shukyogaku (A Comparative Religious Study of Death), Hyoden Kiyozawa Manshi (Manshi Kiyozawa: A Critical Biography), and other works.

Toward a “Civilization of Life” by Minoru Sanada

The root cause of all the serious problems facing our age resides in the loss of the essential view of life derived from the religiosity that is unique to human beings.

Minoru Sonoda is the head priest of the Chichibu Shrine in Saitama Prefecture and is a director of Japan’s Association of Shinto Shrines. He took his doctoral degree at the University of Tokyo in 1965. He was a professor at Kokugakuin University in Tokyo and then, until he retired in 2000, at Kyoto University, where he is now professor emeritus. He has published widely and has edited many collections and anthologies on Shinto.

From Private Profit to Public Good by Hiromasa Mase

Companies and religious organizations are both members of society. Both must place greater emphasis on activities that contribute to society as a whole.

Hiromasa Mase is head of the graduate program at Tohoku University of Community Service and Science in Sakata, Yamagata Prefecture. Until 2001 he was a professor in the Faculty of Letters at Keio University in Tokyo, where he is now professor emeritus. He is the author of numerous books and articles on the philosophy of religion.

The essence of truly religious people lies in how they react and respond to other lives, both human and other.

From 1965 to 1967 C. W. Nicol, born in Wales, was marine mammal technician at the Arctic Biological Station of the Fisheries Research Board of Canada. After that he was game warden of the Simien Mountain National Park, Ethiopia, for two years. In 1972 he was appointed senior field technician in environmental impact studies for Environment Canada at the Freshwater Institute, Winnipeg. Since 1980 he has lived in Kurohime, Nagano Prefecture, as a writer. He received Japanese citizenship in 1995 and founded the C. W. Nicol Afan Woodland Trust in 2002.

Shugendo and Women by Gaynor Sekimori

The prohibition of women from sacred sites, the norm until 1872, remains in place in a small number of locations. There are still strong reminders that the relationship of women with Shugendo remains contested.

Gaynor Sekimori graduated in Oriental studies from the Australian National University in Canberra. She received her doctorate from the University of Cambridge in 2000. A translator of Buddhist works, she is presently managing editor of the International Journal of Asian Studies (Cambridge University Press) and an associate professor at the University of Tokyo. A specialist in the history of Japanese religion, with a particular interest in Shugendo, she was ordained at Mount Haguro in 2005.

What you do with all your might today will influence tomorrow. Tomorrow there will be an entirely new self. What happens from now on is immaterial-just live today to the fullest.

Yusai Sakai, born in 1926, is a priest of the Tendai sect of Japanese Buddhism and head of Iimuro Fudo-do at Enryakuji on Mount Hiei. He completed the thousand-day mountain-circuit practice in 1980, and later completed a second round of this practice in 1987. He was given the title Dai-Ajari (supreme teacher). In 1991, in cooperation with the Buddhist Association of China, he organized a joint pilgrimage of Japanese and Chinese monks to Mount Wutai, the first such event since Buddhism took root in East Asia.

The Lotus Sutra and World Peace by Nikkyo Niwano

Our lives are an irreplaceable blessing granted to us by the grace of God. Thus we must always maintain an affirmative attitude toward life.

Manuel Amoros is a Catholic priest. He came to Japan from his native Spain in 1954 and taught the classics (Latin and Greek) and philosophical anthropology at Sophia University in Tokyo. Since his retirement in 1997, Dr. Amoros has headed the Spiritual Center Seseragi. He also engages in promoting religious dialogue with Buddhist and Shinto groups.

The famous novelist, a practicing Roman Catholic, portrayed his own interior conflict between his Christian self and his Japanese self, pondering the rejection of his foreign faith.

Elizabeth Cameron Galbraith is associate professor of religion at St. Olaf College, Northfield, Minnesota. She received her D.Phil. from the University of Cambridge Divinity School in 1992. In 1996 the book that grew out of her doctorate, Kant and Theology: Was Kant a Closet Theologian?, was published. Her longterm research interests are the problem of evil (theodicy in particular) and Asian Christianity.

Using Our Talents and Abilities for Others by Hachiro Kitagawa

Our skills truly shine when we utilize them to bring peace of mind, joy, and salvation to other people.

Hachiro Kitagawa, born in 1944, is a ceramic artist. Having set up a kiln at the foot of Mount Aso, Kumamoto Prefecture, where he also pursues organic farming, he has developed a unique style of glazing techniques.

Seen with Joy by All the Living by Gene Reeves

The author believes that the Lotus Sutra does not actually teach that we should burn ourselves or our body parts. Suicide would go against the teachings of the sutra as a whole as well as the Buddha’s precept against killing.

To Walk Beside Those Who Need Me

The faith of this member of Rissho Kosei-kai had helped her in the midst of personal trials, but she has now learned how to be of service to others simply by being there when they need her.

Mayumi Umeda is a member of the Hachioji Branch of Rissho Kosei-kai in Tokyo.

The Sutra of the Lotus Flower of the Wonderful Law
Chapter 11: Beholding the Precious Stupa (1) by Nikkyo Niwano

This is the eighty-sixth installment of a detailed commentary on the Threefold Lotus Sutra by the late founder of Rissho Kosei-kai, Rev. Nikkyo Niwano.