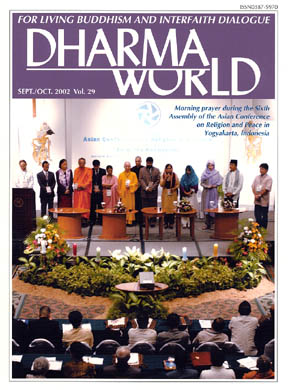 Sixth Assembly of the Asian Conference on Religion and Peace, Yogyakarta, Indonesia

The Age of Life by Nichiko Niwano

Paul H. Sherbow is a special consultant for Hindu affairs at the WCRP International office in New York.

2,000 Years of Contacts and Eight Years of Official Relations by Eva Ruth Palmieri

A very special embassy was set up in Rome less than ten years ago. In fact, after centuries of misunderstandings, in the year 1994 the Roman Catholic church and the Jews set their seal on official relations with the establishment of the Israeli Embassy to the Holy See. His Excellency Yosef Lamdan, appointed in 2000 as the third ambassador to the Holy See, agreed to be interviewed by Dharma World about his unique assignment.

From 1984 to 1994, Jacqueline Rouge was an active president of the International Committee of the World Conference on Religion and Peace (WCRP) and is now its honorary president. She is also now official WCRP representative with UNESCO.

The Whole Earth as Our Sangha by Ruben L.F. Habito

The intuitive path, which the sages have traversed for thousands of years, is now converging with the scientific path, which tries to figure out reality in terms of equations and relationships.

Ruben L.F. Habito is professor of world religions and spirituality, Perkins School of Theology, Southern Methodist University, Dallas, Texas. He is the author of numerous scholarly articles and a dozen books in Japanese and English, including Original Enlightenment: Tendai Hongaku Doctrine and Japanese Buddhism (Tokyo: International Institute for Buddhist Studies of ICABS, 1996).

Ethic of Survival or Vision of Hope? by John D’Arcy May

Just what is interreligious dialogue and what is its aim? How can we maintain our own faith and beliefs and effect true dialogue with those of other faiths? Should we look to an “ethic of survival” or a “vision of hope” as we move into the future? These and many other questions are examined here in detail.

John D’Arcy May, Th.D. (ecumenics), Ph.D. (history of religion), served as director of the Irish School of Ecumenics, Trinity College in Dublin, and is now associate professor of interfaith dialogue and ethics there. He is a member of the International Interfaith Centre (IIC) in Oxford.

The Lotus Sutra delights us with its imaginative vision. It represents the Buddha’s attempt to teach all of us that we should hear and share the Dharma. Just as heavenly flowers fell upon the holy assembly at Sacred Eagle Peak, so does it shower its blessings upon all who hear and revere its teachings.

One of the best-known works of Japanese sculpture abroad, this thirteenth-century rendition of an itinerant priest is filled with power and majesty. Especially striking are the six small Amida figures that issue forth on his intoning the name of the Buddha Amida.

Izumi Ogino is a member of the Fukuchiyama Branch of Rissho Kosei-kai in Kyoto.

The Venerable One Converts the Courtesan by Hajime Nakamura

This installment describes how the Buddha Sakyamuni rejected the invitation of the Licchavi nobles in order to dine at the house of a successful courtesan, who had been the first to honor him with an invitation. During the meal, his words convert Ambapali, who then donates her mango grove to the Buddha and the Sangha.

The late Hajime Nakamura, an authority on Indian philosophy, was president of the Eastern Institute in Tokyo and a professor emeritus of the University of Tokyo at the time of his death in October 1999. This ongoing series is a translation of Gotama Budda, vol. 2, Tokyo, Shunjusha, 1992.

The Sutra of the Lotus Flower of the Wonderful Law
Chapter 5: The Parable of the Herbs (3) by Nikkyo Niwano

This is the sixty-sixth installment of a detailed commentary on the Threefold Lotus Sutra by the late founder of Rissho Kosei-kai, Rev. Nikkyo Niwano.