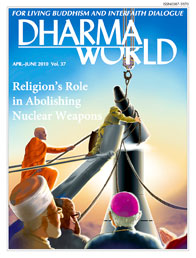 When the Nobel Peace Prize Committee announced that the prize for 2009 was being awarded to President Barack Obama of the United States, a controversy arose basically on two fronts. Some people argued that Mr. Obama had not yet achieved much on the world political stage, and some criticized the committee’s decision by saying that he is the commander in chief of the U.S. military, which is currently fighting two wars, one in Iraq and the other in Afghanistan. . .

Masamichi Kamiya is the minister of Rissho Kosei-kai of New York. From October 1998 until March 2002, he served as a special research fellow at the Hiroshima Peace Institute, Hiroshima City University.

The Heart of Nuclear Weapons by Scilla Elworthy

Since we can no longer afford the luxury of competition, we are obliged – perhaps for the first time in human history – to learn how to cooperate on a national, international, and global scale.

Scilla Elworthy, PhD, founded Peace Direct in 2002 in London to fund, promote, and learn from peace builders in conflict areas; previously she founded the Oxford Research Group in 1982 to develop effective dialogue between nuclear weapons policymakers worldwide and their critics. It is for this work that she was awarded the Niwano Peace Prize in 2003 and nominated three times for the Nobel Peace Prize. From 2005 she was advisor to Sir Richard Branson, Peter Gabriel, and Archbishop Desmond Tutu in setting up The Elders initiative

In confronting the problem of nuclear weapons, we are being forced to confront far more fundamental questions. What kind of global system do we want to live in? Do we want to continue living in a political system that worships winning and power?

Steven Lloyd Leeper is chairperson of the Hiroshima Peace Culture Foundation. In April 2002 he was appointed the North American coordinator of Mayors for Peace. Mr. Leeper holds an MA in clinical psychology from the University of West Georgia. He is the author of Hiroshima Ishin (The Hiroshima Revolution) and of a number of articles on nuclear issues.

The thinking that Japan must rely on nuclear arms has deep roots in the nation’s defense and diplomatic establishments. There is, however, a countervailing force – the endeavor to abolish nuclear weapons by a nation that has firsthand experience of nuclear devastation.

Hiromichi Umebayashi is the founder and the special advisor of the Peace Depot, a nonprofit organization based in Yokohama, Japan. He also serves as the East Asian coordinator of the Parliamentarians for Nuclear Non-proliferation and Disarmament (PNND). He holds a PhD in applied physics from the University of Tokyo.

The treaty setting up the zone by Kazakhstan, Kyrgyzstan, Tajikistan, Turkmenistan, and Uzbekistan is a concrete contribution to the implementation of the Treaty on the Non-Proliferation of Nuclear Weapons.

Tsutomu Ishiguri, a professor at the Kyoto University of Foreign Studies, is former director of the UN Regional Centre for Peace and Disarmament in Asia and the Pacific. As its director he organized numerous international conferences, including nineteen UN conferences in Japan on disarmament, and played an important role in assisting Central Asian states in drafting the Central Asia Nuclear-Weapon-Free Zone Treaty, which entered into force on March 21, 2009.

Shared Security: the Path Forward to Save Humanity by Yoshiaki Sanada

Human security can only be manifested in real terms when grounded in a renewed understanding of security as viewed from the standpoint of shared human dignity, human rights, and human needs.

Until March 2007, Yoshiaki Sanada served as a professor of law at Chuo University in Tokyo, where he is now professor emeritus. He has also been a guest professor at the Institute of Comparative Law of the China University of Politics and Law in Beijing. He is director of the Peace Research Institute of the Japanese Committee of the World Conference of Religions for Peace.

Ridding the world of nuclear weapons is a monumental task that will necessitate cooperation and trust, overcoming narrow national interests and boundaries. But it is not easy work and will require cooperation from many sides.

Allison Pytlak is the disarmament program coordinator at Religions for Peace. In this role, she has not only mobilized religious leaders and networks to advocate the ban on cluster munitions but also developed programming on a range of disarmament issues, including small arms, land mines, and nuclear weapons. She actively represents Religions for Peace on the NGOCDPS and as a writer for the First Committee Monitor.

Religion Holds the Key to Disarmament An interview with Ven. Gijun Sugitani

On January 29, when the 2010 Review Conference of the Nuclear Non-Proliferation Treaty (NPT) was approaching, Dharma World interviewed Ven. Gijun Sugitani, a Japanese Tendai cleric and the chairperson of the International Standing Commission on Disarmament and Security of Religions for Peace, on religion’s role in making the abolition of nuclear weapons a reality.

Ven. Gijun Sugitani, chief priest of the temple Enjuin, Tokyo, is an executive advisor to the Tendai Buddhist denomination in Japan. He serves as the chairperson of the International Standing Commission on Disarmament and Security of the World Conference of Religions for Peace and has also served as secretary-general of the Japanese Committee of Religions for Peace.

Nuclear Weapons Must Not Exist in This World:
Testimony of a Doctor Who Treated Atomic Bomb Victims by Shuntaro Hida

On July 14, 2009, the Peace Research Institute of the Japanese Committee of the World Conference of Religions for Peace invited to its study session Dr. Shuntaro Hida, former director of the Hibakusha Counseling Center of the Japan Confederation of A- and H-Bomb Sufferers Organizations. Born in 1917, Dr. Hida, who was himself irradiated by the bomb dropped on Hiroshima, has, over a period of more than sixty years, treated six thousand patients suffering from illnesses resulting from atomic bomb radiation. Dr. Hida spoke from his experience with acute radiation syndrome and internal exposure caused by the atomic bomb. The following is a portion of his talk.

Rissho Kosei-kai’s unceasing efforts since 1970 at UN and interreligious conferences to promote a vision of a world free of nuclear weapons will culminate this year.

Aiming for a World without War by Nikkyo Niwano

Let Us Become Good Friends in the Dharma by Nichiko Niwano

The Sutra of the Lotus Flower of the Wonderful Law Chapter 16: Revelation of the [Eternal] Life of the Tathagata (2) by Nikkyo Niwano

This is 101st installment of a detailed commentary on the Threefold Lotus Sutra by the founder of Rissho Kosei-kai, Rev. Nikkyo Niwano.