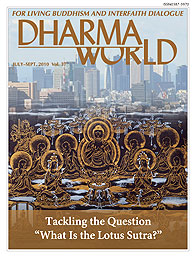 Tackling the Question “What Is the Lotus Sutra?”

What began as a single planned “final” meeting between Japanese Buddhist scholars and American Christian theologians, whose purpose was to explore aspects of the Mahayana scripture that is one of the world’s great religious classics, has become an ongoing series of sessions that are increasingly both intellectually and spiritually rewarding.

Gene Reeves has done research and lectured on the Lotus Sutra worldwide for a quarter century. He is a consultant and teacher at Rissho Kosei-kai and is retired from the University of Tsukuba. Before coming to Japan in 1989, he was head of Meadville Lombard Theological School and a lecturer at the University of Chicago Divinity School. His The Lotus Sutra: A Contemporary Translation of a Buddhist Classic was published in 2008.

Groping Through the Maze of the Lotus Sutra by Miriam Levering

The author compares herself to an unprepared explorer who found that the sutra text lacked a number of things she expected to find within its pages.

Miriam Levering, an international advisor at Rissho Kosei-kai, is professor of Buddhism and of Chinese and Japanese religion at the University of Tennessee in Knoxville. She received her PhD from Harvard University in 1978. She has edited a book called Rethinking Scripture, a study of the concept and use of sacred texts in the major religious traditions, and has written many articles on women and gender in Chan and Zen Buddhism.

A Phenomenological Answer to the Question
“What Is the Lotus Sutra?” by Donald W. Mitchell

This author has found the Lotus Sutra to be a source of transformative goodness in the lives of Buddhists, and a motivational force to bring healing and unity to the world.

Donald W. Mitchell is a professor of comparative philosophy of religion at Purdue University in West Lafayette, Indiana. He has served the Vatican’s Pontifical Council for Interreligious Dialogue and the U.S. Conference of Catholic Bishops as a consultant for dialogue with Buddhism and is active in the Focolare Movement. One of his most recent books is Buddhism: Introducing the Buddhist Experience.

The Materiality of the Lotus Sutra: Scripture, Relic,
and Buried Treasure by D. Max Moerman

D. Max Moerman, associate professor in the Department of Asian and Middle Eastern Cultures, joined the faculty of Barnard College in 1998. Dr. Moerman is the associate director of the Donald Keene Center for Japanese Culture, Columbia University, and of the Columbia Center for Japanese Religions. His publications include Localizing Paradise: Kumano Pilgrimage and the Religious Landscape of Premodern Japan.

Look! Up in the sky!” “It’s a bird!” “It’s a plane!” “It’s Superman!” The people in Metropolis didn’t have nearly as much trouble identifying Superman as eleven scholars had in trying to nail down a concrete answer to the theme question, “What is the Lotus Sutra?” at the fourteenth International Lotus Sutra Seminar held, for the second consecutive year, in Paradise (i.e., Rissho Kosei-kai, Kona Branch, Hawaii). Gene Reeves, one of the founding fathers of this conference series, even allowed for the ambiguity inherent in the topic by inviting participants to approach the theme from any particular point of view they desired to use. It will surprise no one, however, that sometimes there is no easy answer to what may seem to be a “simple” question. . . .

Joseph M. Logan is a senior fellow at the Essential Lay Buddhism Study Center in Tokyo. His work as a member of the center’s translation team focuses on English wording and cadence with the goal of making recitation in English a more effective practice for internalizing a sutra’s teachings.

The Japanese poet Saigyo (1118 – 90), known for such works as his Sankashu (Mountain Cottage Collection), left us this verse: “The lotus blooming, / The waves beating / On the shore – / My mind hears them / As the preaching of the Dharma.” . . .

The Buddha’s Teachings Affect All of Humankind by Nikkyo Niwano

The Niwano Peace Foundation presented the twenty-seventh Niwano Peace Prize to Ms. Ela Ramesh Bhatt, the founder and former secretary-general of the Self-Employed Women’s Association (SEWA), based in Ahmedabad, Gujarat State, India. Her contribution to the empowerment of socially and economically oppressed women in India and elsewhere through the activities of the SEWA has won her recognition around the world. The prize was presented in Tokyo on May 13. The following is the recipient’s acceptance speech.

True to Self and Open to Others An interview with Rev. Fergus Capie,
director of the London Inter Faith Centre

In the following interview, Rev. Fergus Capie describes his views on interfaith relations and dialogue with fundamentalism as well as movements outside the boundaries of religion. Rev. Capie is the director of the London Inter Faith Centre, which he describes as a place of meeting, study, and dialogue among the religions and with the secular world. The interview took place in Aldeburgh, England, with Ms. Janine Edge, chair of the Trustees of the Scientific and Medical Network in Gloucestershire, England, as the interviewer. It originally appeared in the Network Review, the journal of the Scientific and Medical Network in slightly different form in December 2009. Dharma World is pleased to publish this revised version of the interview, in which a new reference on interfaith cooperation has been added by Rev. Capie.

The Sutra of the Lotus Flower of the Wonderful Law Chapter 16: Revelation of the [Eternal] Life of the Tathagata (3) by Nikkyo Niwano

This is 102nd installment of a detailed commentary on the Threefold Lotus Sutra by the founder of Rissho Kosei-kai, Rev. Nikkyo Niwano.