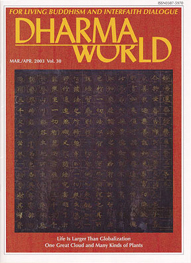 Life is Larger Than Globalization

How You Act Reveals Your Past, Present, and Future by Nikkyo Niwano

The Virtue of Humility by Nichiko Niwano

When we realize what a blessing our life is and the impulse to thanksgiving arises within us, we become able to accept everything that occurs around us as a blessing.

Life Is Larger Than Globalization

Eimert van Herwijnen, president of the International Association for Religious Freedom, one of the oldest international interreligious organizations in the world, visited Japan in October 2002 to deliver a lecture on globalization and corporate responsibility at Nagoya University of Commerce and Business. Dharma World spoke with him in Tokyo about the confrontation between modernization and traditional values.

Eimert van Herwijnen is an active member of the Remonstrant Church, a small, nondogmatic Christian denomination founded in 1619, and served on its board for interchurch aid. After retiring from the Royal Dutch/Shell Group in 1985, he joined the board of the Dutch Industrial Mission. In 1989 he was elected to the board of the Remonstrant Church and served as its chairman from 1993 to 1997. He has been a member of the IARF’s Dutch chapter since 1993 and helped organize and lead IARF conferences in Germany, in 1994, 1995, and 1998, and in the Netherlands in 1997. He was elected to the International Council of IARF and has been its president since 1999.

How God Is Present in Other Cultures

The Most Rev. Samuel Ruiz Garcia, emeritus bishop of San Cristobal de Las Casas in Chiapas, Mexico, has been engaged in elevating the social standing of indigenous communities in Mexico and elsewhere in Central and South America for more than forty years. Last year he received the 19th Niwano Peace Prize for his distinguished contribution based on religious spirit. Dharma World interviewed him in May last year, when he visited Japan to receive the award.

The Vatican Promotes Knowledge of Islam by Eva Ruth Palmieri

Fr. Justo Lacunzabalda, chairman of the Vatican’s Pontifical Institute of Arab and Islamic Studies, speaks eloquently on the need to improve and foster dialogue between Christianity and Islam based upon mutual understanding and respect.

A small number of Theravada Buddhist monks in Thailand actively concern themselves with social and human development in their country. The author of this article, a socially engaged monk from northeastern Thailand, addressed Japanese Buddhists during a symposium entitled “Buddhism, NGOs, and Civil Society” in Tokyo in July 2002. This article is adapted from the translation of his speech.

Ven. Phra Paisal Visalo is the abbot of Wat Pasukato in Chaiyaphum Province, Thailand. He was involved in student activism and human-rights protection before entering the monkhood in 1983. He is the cofounder of Sekiyadhamma, a network of socially engaged monks all over the country. In addition to writing and editing books on the environment and Buddhism, he holds training courses on nonviolence and meditation.

Democracy and Monasticism by George A. Sioris

Buddhist and Western monastic communities were governed by a set of rules that were both democratic and authoritarian at the same time. Here the delicate balance between these two seemingly opposing ideas is examined in the light of how well the system worked for the monastic orders East and West.

George A. Sioris is the former ambassador of Greece to India, Thailand, and Japan and president emeritus of the Asiatic Society of Japan. He received an honorary doctorate in the humanities from Adamson University in Manila. He is affiliated with several universities and academic institutions in Japan and elsewhere in Asia. He is also a contributing advisor to the Japan Times. This essay is a slightly adapted portion of one of his most recent works, Monastic Discipline: Vinaya and Orthodox Monasticism–An Attempt at Comparison (Chiang Mai: The Knowledge Center, 2002).

One Great Cloud and Many Kinds of Plants by Gene Reeves

Just as a cloud drops rain upon all plants, and the sun and moon shed light upon all things, so is the One Vehicle for all beings. We are all nourished by it and in turn can nourish others–and thus become like buddhas ourselves.

How Being Grateful Changed My Life by Yukiko Hicks

A Japanese member of Rissho Kosei-kai now living in the United States addressed the twentieth anniversary meeting of the New York Branch on October 27, 2002. This is a slightly edited version of her talk, in which she described the strength her faith has given her.

The Great Earthquake by Hajime Nakamura

As he neared the end of his existence, Sakyamuni Buddha sat beneath a tree in Capala and renounced the rest of his life, resolving to enter nirvana. When he did so, the earth trembled, shook, and quaked mightily; at the same time, his very renunciation lengthened his life span a little more.

The late Dr. Hajime Nakamura, an authority on Indian philosophy, was president of the Eastern Institute in Tokyo and a professor emeritus of the University of Tokyo at the time of his death in October 1999. This ongoing series is a translation of Gotama Buddha, vol. 2, Tokyo, Shunjusha, 1992.

In 823, Kukai, founder of the Shingon sect, was granted the temple Toji, where he established in the lecture hall a three-dimensional mandala by arranging twenty-one Buddhist sculptures. The central image is a fifteenth-century carving of the Cosmic Buddha, Vairocana.

The Sutra of the Lotus Flower of the Wonderful Law
Chapter 6: Prediction (2) by Nikkyo Niwano

This is the sixty-ninth installment of a detailed commentary on the Threefold Lotus Sutra by the late founder of Rissho Kosei-kai, Rev. Nikkyo Niwano.