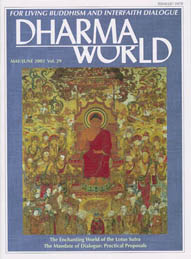 Doing What Is Appropriate by Nikkyo Niwano

In our daily lives, we usually exchange greetings with others without giving them any thought; but in making the effort to communicate directly from the heart, we can strip away the trappings of the ego and develop pure selflessness.

We Must Be Prepared to Share by Robert Edward Green

A retired American minister reminds us that governments will often claim a religious basis for their conflicts, but the roots of the problem lie in the poverty affecting much of the world’s population.

Robert Edward Green is minister emeritus of the First Unitarian Universalist Church in Stockton, California. He retired in 1996 after thirty-five years in the active ministry and twenty-two years as minister of the Stockton church. He now serves as president of the Funeral Consumers Alliance of California and Hawaii.

Religion and the State by I. Loganathan

In all human history the name of India’s great Emperor Ashoka, who reigned ca. 265–238 b.c.e., stands almost alone as a monarch who was so greatly influenced by the Buddha’s teachings that he adopted them not only in his own life but also in the benevolent way he ruled his people.

I. Loganathan is president of the Buddhist Society of India and of the Gautama Buddhist School, Karnataka State, India.

The Mandate of Dialogue: Practical Proposals by Marjorie Hewitt Suchocki

Marjorie Hewitt Suchocki is the Ingraham Professor of Theology at Claremont School of Theology in California, teaching in the areas of process theology, feminist theology, and Christian doctrine. Author of many books and articles, among which is a forthcoming book entitled, Divinity and Diversity: A Christian Affirmation of Religious Pluralism.

A Pioneer in Reducing Prejudice

As if in response to what many see as the most basic need for world peace in our lifetimes, Eva Ruth Palmieri interviewed a multicultural teacher of intercultural relations who practices what he preaches: “Only by overcoming one’s own prejudices can a person live successfully.”

The Enchanting World of the Lotus Sutra (1) by Gene Reeves

This article represents the first installment in a new series of essays devoted to stories in the Lotus Sutra. Written by an American researcher on Buddhism and the Lotus Sutra, it offers fresh insights into how we can incorporate the teachings found in the sutra’s dramatic stories in our daily lives.

The story of a mother’s struggle to understand why her son refuses to go to school and why she has so much trouble dealing with it, through which she also learns how she can be a better mother, and how she can give others their freedom by giving them love.

Katsue Ishii is a member of the Toshima Branch of Rissho Kosei-kai in Tokyo.

A Powerful Pair of Benevolent Kings by Takeshi Kuno

These masterworks of the Kamakura period (1185–1333), believed carved by the sculptor Jokei, still serve as guardians of the deities on the altar of the Saikondo at the temple Kofuku-ji in Nara.

At the age of 80, Sakyamuni Buddha set forth on his ﾞnal journey, during which he visited the prosperous city of Vesali, where he and his disciples stayed in the mango grove of the courtesan Ambapali. After hearing his teachings on mindfulness, she invited him and his entourage to a meal at her home, and later donated her grove to the Buddhist Sangha.

The Sutra of the Lotus Flower of the Wonderful Law
Chapter 5: The Parable of the Herbs (1) by Nikkyo Niwano

This is the sixty-forth installment of a detailed commentary on the Threefold Lotus Sutra by the late founder of Rissho Kosei-kai, Rev. Nikkyo Niwano.