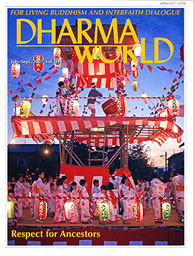 Why Respect for Ancestors Is Important by Kotaro Suzuki

As head of a Rissho Kosei-kai branch for ten years, until 2006, I interacted with many members and dealt with various people’s life problems. Speaking on the basis of that experience, I can say that all those who overcame their problems and achieved happiness, without exception, valued their parents and diligently practiced daily devotions for the benefit of ancestors (senzo kuyo), placing offerings of flowers, food, and drink on the home Buddhist altar and reciting sutra passages. Interestingly, even people who had resented their parents found happiness when they repented of their resentment and began practicing daily devotions.

Kotaro Suzuki is director of Kosei-kai International. He has formerly served as the director of the Secretaries’ Office of Rissho Kosei-kai and the head of the organization’s Nerima Branch in Tokyo.

The practice of caring for one’s ancestors is, of course, not unique to Japan. On the contrary, it is a basic element of “primal religion” in all cultures.

Michael Pye had been professor of religious studies at the University of Marburg, Germany, until 2004. He is now a visiting professor at Otani University, Kyoto. From 1995 to 2000, Dr. Pye served as president of the International Association for the History of Religions. His books include Skilful Means: A Concept in Mahayana Buddhism and MacMillan Dictionary of Religion.

The Place of Ancestors in Buddhism and Christianity by Mark R. Mullins

Over the previous century, many Christian churches and movements have instituted a wide range of post-funerary rites that resemble Buddhist practices in many ways.

Mark R. Mullins is a member of the Faculty of Liberal Arts and Graduate School of Global Studies at Sophia University, Tokyo, where his teaching and research focuses on religion in modern society. He is the author and coeditor of a number of books, including Religion and Society in Modern Japan, Christianity Made in Japan, and Religion and Social Crisis in Japan.

The Japanese and Ancestor Veneration by Kokan Sasaki

Buddhism in Japan features a unique relationship between the Buddha and deceased kindred and ancestors. Long efforts by sects and denominations to steer followers away from ancestors to the Buddha have had little success.

Kokan Sasaki, Litt.D., was a professor in the Faculty of Literature at Komazawa University, Tokyo, where he is now professor emeritus. His specialty is religious anthropology and cultural anthropology. His recent books include Butsuriki: Seikatsu Bukkyo no Dainamizumu (The Buddha Power: Dynamism of Living Buddhism).

Ancestor Veneration among Japanese-Americans in Hawaii by Joshin Washimi

Over one hundred and twenty years have passed since Japanese people first came to Hawaii. It seems only natural that the religious activities of their descendants should adopt a style that fits into the American cultural landscape.

Joshin Washimi, Litt.D., is associate professor in the Faculty of Literature at Taisho University, Tokyo, where his teaching and research focus on Buddhism and its traditional funerary rituals in Japan. He is the author of a number of books and articles on the developments of the Jodo Mission overseas.

Followers of Islam live in an everlasting struggle to accomplish the obligatory deeds demanded of them, and while ancestors are being commemorated, succeeding generations become more conscious of their obligations.

Jiro Arimi is vice president of the Japan Muslim Association and a visiting professor at Takushoku University Shariah Research Institute in Tokyo. After graduating from the Toyo University Faculty of Sociology, he studied Islam as an invited student at King Abdul Aziz University, Makkah [Mecca], and Imam Muhammad Ibn Saud Islamic University, Riyadh, from 1975 to 1980.

Ancestor Appreciation by Kris Ladusau and the Oklahoma Sangha

Kris Ladusau is a member of the Rissho Kosei-kai Dharma Center of Oklahoma in Oklahoma City. She is one of the core members who started an English-speaking group there. On being asked by Dharma World to write on how paying respect to ancestors has been adopted and is being practiced by the Oklahoma members, she collected their ideas and included them in the present essay.

A Theological Interpretation of the Veneration of Ancestors in Rissho Kosei-kai by Michio T. Shinozaki

Ancestor veneration is a skillful means for the practice of Buddhist teachings. In our organization, it is truly a Buddhist practice, though it involves a new interpretation of the traditional practice.

Michio T. Shinozaki, formerly director of the General Secretariat of Rissho Kosei-kai, is president of the organization’s Gakurin seminary in Tokyo. He received a Ph.D. in Religious Studies from Vanderbilt University, Nashville, Tennessee, in 1988. He has contributed a number of articles on Buddhist ethics to various journals.

Religion as an Element of Mutual Recognition by Hans Ucko

Hans Ucko is the program secretary in the Office on Interreligious Relations and Dialogue of the World Council of Churches in Geneva. He is an ordained minister of the Church of Sweden. Dr. Ucko has written extensively on Jewish-Christian and interreligious dialogue in several languages. His books include Common Roots and New Horizons and The Jubilee Challenge: Utopia or Possibility?

The Values of Freedom of Expression and of Freedom of Religion or Belief as Protected by the United Nations in Postmodern Society by John B. Taylor

Laws and punishments are not the only ways of ensuring respect for fundamental freedoms. A change of attitude can bring new life to values prescribed by religions and human rights principles.

A good society would recognize the inherent worth of all people and would help its citizens to cultivate inner peace. This essay is based on an address delivered by the author at a symposium held by Religions for Peace and Rissho Kosei-kai of New York at the Japan Society in New York to commemorate the centennial of the birth of the late founder of Rissho Kosei-kai, Rev. Nikkyo Niwano, on December 14, 2006.

Kenneth Kraft is professor of religious studies at Lehigh University, Bethlehem, Pennsylvania. Dr. Kraft has served as an advisor to the Buddhist Peace Fellowship, the Forum on Religion and Ecology, and the World Faiths Development Dialogue. His books include Eloquent Zen: Daito and Early Japanese Zen and The Wheel of Engaged Buddhism: A New Map of the Path.

Restoring Warmth in the Family by Nichiko Niwano

As we continue striving to perfect our character, the family home can be considered the best place for training ourselves to do so.

Peace from the Viewpoint of Religion by Nikkyo Niwano