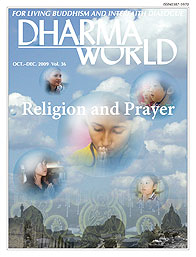 In this world, some problems are simply beyond our power to solve. Indeed,our world seems to be just the sort of place where things do not work out in the way we planned. When we come up against trouble without remedy in this contrary world of ours, for many of us there is only one recourse in the face of the inevitable – prayer. The fact that we pray may be considered as evidence of our belief in the action of invisible gods and buddhas. I think that we pray because, deep in the bottom of our hearts, we firmly believe in the existence of the gods and buddhas who have given each of us life and continue to watch over us. However, prayer does not mean just asking the gods and buddhas to save us or grant our wishes. . . .

Hiroe Kikuchi is a deputy director of the General Affairs Bureau of Rissho Kosei-kai in Tokyo.

Today our spiritual reading of scriptures requires a critical discernment between what is obsolete in the old texts and what can still speak to us and challenge us.

Joseph S. O’Leary, professor of English literature at Sophia University, was born in Cork, Ireland, in 1949, and studied literature, philosophy, and theology at Maynooth College and in Rome and Paris. Resident in Japan since 1983, he has worked with the Nanzan Institute for Religion and Culture and has written on interreligious theology. His publications include Religious Pluralism and Christian Truth (Edinburgh University Press, 1996).

Zen and the Art of Prayer by Ruben L. F. Habito

All the classic forms of prayer are fully activated as we sit in silence, breathing in and breathing out. Zen practice in this way can be considered a form of prayer that does not have recourse to words.

Ruben L. F. Habito is a faculty member at Perkins School of Theology, Southern Methodist University, and is founding teacher of the Maria Kannon Zen Center in Dallas, Texas. He is married to Maria Reis Habito, and together they have two teenage sons. He is the author of Healing Breath: Zen for Christians and Buddhists in a Wounded World (Boston: Wisdom, 2006); Experiencing Buddhism: Ways of Wisdom and Compassion (Maryknoll: Orbis Books, 2005); and many other works in English and Japanese.

The Islamic Concept of Worship and Prayer by Kazuko Shiojiri

A scholar of the theology of Islam describes the Islamic view of humanity and the role of worship in that faith and points out that it is possible to see in the religion’s fundamental beliefs a common concept with those held by Judaism and Christianity.

Kazuko Shiojiri is executive director and vice president of the University of Tsukuba, in Japan. She received her PhD in 1998 from the University of Tokyo. She is the author of many books and essays on the theology of Islam and interreligious dialogue, including Islam no ningenkan, sekaikan: Shukyo shiso no shin’en e (The View of Humans and the World in Islam: Toward the Depth of Religious Thought), 2008.

When we feel hostile toward the person we are trying to love and care for, we need prayer as a way to forgive ourselves and give ourselves time to let kind feelings revive within us.

The Spiritual Language of Each Human Being by Alberto Quattrucci

Alberto Quattrucci studied pedagogy at the Faculty of Magistero, Rome, and theology at the Pontifical Gregorian University, also in Rome, and received the degree of “educator of special communities.” Since 1969 he has been involved in the Community of Sant’Egidio in Rome. He was ordained a permanent deacon in 1988 and has since served as the secretary-general of International Meetings – Peoples and Religions, an association founded by the Community of Sant’Egidio to promote mutual knowledge and dialogue among religions.

Ms. Shirley Alphonse visited Japan in June 2009 for cultural exchange with the Japanese people and to share T’Sou-ke tribe and Shinto ceremonies. She spoke and performed the T’Sou-ke smudge ritual on the University of Tokyo main campus and also at Tanashi Shrine in Tokyo. The following interview took place via e-mail after her around-the-clock schedule during her visit to Japan had ended.

Shirley Alphonse is a spiritual leader-healer of the T’Sou-ke Nation on Vancouver Island, British Columbia, Canada, where she was born on one of its reserves. She has devoted her life to relieving the emotional suffering of fellow members of the nation and helping them find peace and love, and reconnect to their Creator. She also conducts funerals for the nation.

In April, twenty-six members of a German interfaith dialogue group led jointly by Dr. Gotthard Fermor, visited Rissho Kosei-kai in Tokyo. They visited Japan to study religious- and humanity-related themes in Japanese culture and discuss them with Buddhists and Christians. Dharma World interviewed Dr. Fermor as follows on the significance of interreligious dialogue.

Gotthard Fermor obtained his PhD in practical theology at the University of Bonn in 1999, and was ordained as a pastor of the Evangelical Church in Rhineland, Germany, in 2000. He is the author of Ekstasis (Kohlhammer, 1999) and has published widely on religion and music.

The Lotus Sutra and Interfaith Relations by Joseph M. Logan

From China, Japan, Korea, and the United States they came – twelve scholars, specialists in Buddhist or religious studies, who made their way to an island paradise earlier this year to participate in the thirteenth of an ongoing series of Lotus Sutra seminars sponsored by Rissho Kosei-kai. As Dr. Gene Reeves, one of the founding fathers of this conference series, stated in his remarks to open the first meeting on Wednesday, March 18, “to accommodate the Japanese love for Hawaii,” and to take advantage of the marvelous Rissho Kosei-kai Retreat Center facility in Kona (on Hawaii’s Big Island), “we thought we’d try Hawaii this year.” Based on the smiling faces of the assembled scholars, it was quite clear that no one had seriously objected to the choice of venue. . . .

Joseph M. Logan is a senior fellow at the Essential Lay Buddhism Study Center in Tokyo. His work as a member of the center’s translation team focuses on English wording and cadence with the goal of making recitation in English a more effective practice for internalizing a sutra’s teachings.

Buddhism: The Way to Dialogue by Pablito A. Baybado Jr.

In a region of diverse cultures and religions, dialogue has to be both the way of life and the mission of each culture and religion if peace is to reign in Asia.

Forging Ties with the Buddha by Nichiko Niwano

The Model Way of Life by Nikkyo Niwano

The Sutra of the Lotus Flower of the Wonderful Law Chapter 15: Springing Up out of the Earth (2) by Nikkyo Niwano

This is the ninety-ninth installment of a detailed commentary on the Threefold Lotus Sutra by the late founder of Rissho Kosei-kai, Rev. Nikkyo Niwano.