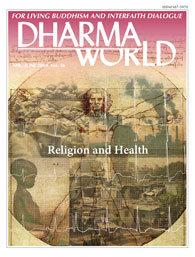 To someone directly and officially concerned, it would see that hospitals should not only treat diseases of the baby but should deal with ailments of both mind and body.

Religion and HIV/AIDS – A Changing Relationship by Gunnar Stålsett

AIDS and religion have been a discordant couple, but most religions have a clear humanitarian agenda. The HIV/AIDS pandemic is one of today’s leading humanitarian challenges.

The Most Reverend Gunnar Stålsett, bishop emeritus of Oslo in the Church of Norway, is a former member of the Nobel Peace Prize Committee. He is now chair of theNiwano Peace Prize Committee. Bishop Stålsett has been actively involved in efforts for reconciliation and peace building as a president of Religions for Peace and the moderator of the European Council of Religious Leaders.

Many religious approaches to health focus on the world’s least favored citizens, especially those who are desperately poor or face exclusion, discrimination, and displacement.

Katherine Marshall is a senior fellow at the Berkley Center for Religion, Peace, and World Affairs at Georgetown University in Washington, DC, and visiting professor in the Department of Government. As a longtime development specialist focused on the world’s poorest countries, she worked for more than thirty-five years with the World Bankand continues to serve as a senior advisor. Among other books and articles, she has written Religion and Development: Where Mind, Heart, and Soul Work Together (World Bank, 2007).

There seems to be a certain continuity in the activities of ascetic practitioners that stems from a different understanding of one’s body.

Tullio Lobetti graduated with a degree in Japanese language and literature from the University of Turin in 2003. He then pursued his interest in the study of religions in Japan by obtaining an MA degree in Japanese religion from the School of Oriental and African Studies (SOAS), University of London, in 2004. In the same year he started his PhD research at SOAS on “Body and Ascetic Practices in Contemporary Japanese Religious Context.” He is now a teaching fellow in the Department of the Study of Religions at SOAS.

Many Thai clerics are highly regarded by the public for their social work and deeply sympathetic attention to serious health issues.

Pinit Ratanakul, who received his PhD from Yale University, is professor of philosophy and director of the College of Religious Studies at Thailand’s Mahidol University. He is the author of Bioethics: An Introduction to the Ethics of Medicine and Life Science and coeditor of A Cross-Cultural Dialogue on Health Care Ethics. He has published widely on bioethics from Theravada Buddhist perspectives.

The Great Turning for Global Healing – An Interview with Dr. Joanna Macy

Dr. Joanna Macy is an American Buddhist teacher, writer, and activist in the campaign for environmental and social justice. When Dr. Macy was in Tokyo in November to participate in the twenty-fourth General Conference of the World Fellowship of Buddhists, DHARMA WORLD interviewed her on the significance of the Buddha’s teachings for global healing.

Health and Poverty by Rosalina Melendres-Valenton

Despite the ambitious development goals laid out by the government, church, and other nongovernment agencies, the Philippines has not been able to sustain the economic growth required to reduce poverty.

Rosalina Melendres-Valenton is president and founder of the San Lorenzo Ruiz Academy and other private schools for tribal children in Oriental Mindoro, the Philippines. She pursued master units in child psychology at the Philippine Normal University, Manila, where she also completed her specialization course for preschool children. She has devoted her life to helping the underprivileged children of Oriental Mindoro, and she has also worked as a vocation promoter since 1987.

Children constitute a large percentage of the world’s poor. There is a strong consensus across most religious traditions about the importance of caring for and supporting them.

The effect of having a strong religious foundation positively correlates with the ability to cope with and heal serious illness.

Taye VanMerlin has a master’s degree in nursing with a minor in human physiology. She is a retired nurse and former co-owner of The Uncommon Herb, an alternative health provider and herb store in Oklahoma City, Oklahoma. Kazzrie Neval is a hereditary herbalist and also former co-owner of The Uncommon Herb, where she trained health professionals and the general public in the safe use of herbs and in other alternative therapies.

An Interspiritual Approach for Modern Medical Care by Wataru Kaya

The author notes that he arrived at his approach through his relations with many psychologically disturbed patients and the psychoanalysis he himself has received.

The Benefits of Buddhist Breathing Techniques by Akikazu Takada

A renowned physiologist and Zen practitioner describes why breathing, which is something we are always doing anyway, should be so strongly connected with our minds.

Until 2001, Akikazu Takada, MD, was a professor at the Department of Physiology of Hamamatsu University School of Medicine, Shizuoka Prefecture, where he is now a professor emeritus. He is also a visiting professor at Showa Women’s University, Tokyo, and serves as a board member of the Brain Health Association of Japan. He is the author of numerous books on Buddhism and health. This essay is a translation of an article that appeared in the August 2008 issue of Daihorin (great Dharma wheel), a Japanese Buddhist magazine.

The Pleasure of Studying the Dharma by Nichiko Niwano

Life inevitably brings with it various forms of suffering. Shakyamuni teaches us how to gain the wisdom to discern the causes of this suffering.

This essay is part of a continuing series of translations from a volume of inspirational writings by the founder of Rissho Kosei-kai. DHARMA WORLD will continue to publish these essays because of their lasting value as guidance for the practice of one’s daily faith.

The Sutra of the Lotus Flower of the Wonderful Law Chapter 14:
A Happy Life (3) by Nikkyo Niwano

This is the ninety-seventh installment of a detailed commentary on the Threefold Lotus Sutra by the late founder of Rissho Kosei-kai, Rev. Nikkyo Niwano.