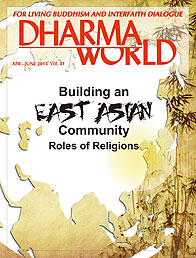 Against the backdrop of tense international situations in East Asia, the International Peace Corps of Religions (IPCR) has been promoting discussions to deepen understanding among religious leaders, scholars, and NGO officers in South Korea, China, and Japan through its annual international seminars. With the objective of building an East Asian Community, IPCR has been making epic efforts to find ways to heal wounds caused by past Japanese militarism and to build a peace community where people of East Asia can trust each other.

The participants in the fifth IPCR International Seminar in Yokohama affirmed that our countries share the Chinese concept of the unity of heaven and humankind, and that this concept is relevant to the participants’ religious values. We have also learned about the participants’ encouraging commitment to making concrete action plans, such as prayer meetings, peace campaigns, and peace education, and task forces to implement them.

We hope to learn more about ways for religious organizations to contribute to a peace community in East Asia and of sharing ideas about those ways with people in other countries in the world.