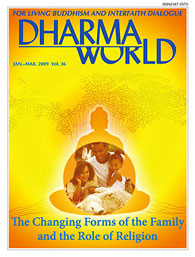 The Changing Forms of the Family and the Role of Religion

Bringing the Four Immeasurables into the Family by Takayo Maruyama

In Japan in recent years, there has been an increase in cases of extremely vicious child abuse, parricide, and infanticide. Why should such horrendous incidents occur within families, which are the smallest units of a community, and particularly among immediate family members, who should be the most able to understand one another? No prescriptions have been discovered, either for the root causes or for a strategy to solve the problem, and it seems that both the government and those involved in education are at a loss. . . .

Restoring the Family for Today’s World by Yoshiaki Sanada

The “breakdown of the family,” about which so much is heard these days, is not a phenomenon unique to Japan; neither is it a phenomenon peculiar to our own time.

Until March 2007, Yoshiaki Sanada served as a professor of law at Chuo University in Tokyo, where he is now professor emeritus. He has also been a guest professor at the Institute of Comparative Law of the China University of Politics and Law in Beijing. He is director of the Peace Research Institute of the Japanese Committee of the World Conference of Religions for Peace.

As families have been bearers of culture in the past, they need to become aware of their new role as heralds of peace and survival for the future of humanity.

Michael Fuss is a professor at the Pontifical Gregorian University, Rome. After ordination as a Catholic priest, Dr. Fuss specialized in Buddhist studies and today is engaged in Buddhist-Christian dialogue. Among his publications is Buddhavacana and Dei Verbum (Leiden: Brill, 1991), a comparative study of scriptural inspiration in the Lotus Sutra and the New Testament.

Why Twenty-first-Century Families Need Faith Communities by Michael A. Schuler

Whatever might be said about the role of religion and citizenship, it is clear that almost two centuries later the family continues to be held in high regard.

Michael A. Schuler has served the First Unitarian Society of Madison in Wisconsin, one of the largest Unitarian Universalist congregations in North America, since 1988. In addition to a master of divinity degree from Starr King School for the Ministry, Berkeley, CA, he earned a PhD in the humanities from Florida State University at Tallahassee.

Putting Our Hands Together Reverently Before Our Families by Nichiko Niwano

In contemporary society the very shape of what constitutes a “family” has been in flux in many ways.

Minoru Sonoda is the head priest of the Chichibu Shrine in Saitama Prefecture. He took his doctoral degree at the University of Tokyo in 1965. He was a professor at Kokugakuin University in Tokyo and then at Kyoto University until he retired in 2000, where he is now professor emeritus. He has published widely and has edited many collections and anthologies on Shinto.

The Dharma of Family by David R. Loy

Family crisis and breakdown is part of a larger issue for Buddhism: its confrontation with modernity, undoubtedly the greatest challenge it has ever faced.

The Muslim family may look as strong and immutable as a citadel, but in reality it is a fragile citadel. It depends on the emotions and attitudes of its members.

Mehrézia Labidi-Maïza is cocoordinator of Global Women of Faith Network, the women’s group working under the umbrella of Religions for Peace. She is a translator specializing in Islamic theological texts and teaches the translation of sacred texts at the European Institute for Human Sciences in Paris. She is also coauthor of school textbooks on religious culture in multireligious environments.

All Are in One Family by Carol J. Ewer

In the world of impermanence, everything changes. What we deem as traditional or normal is only a moment or period of time as transience takes place. In our Buddhist practice today, if we do not move along with the impermanence, we suffer.

A noted Italian sociologist offers some detailed suggestions to help young couples who are starting out on married family life achieve a stable union of lasting mutual affection.

Alberto Friso is a professional sociologist. Together with his wife, Anna, he is centrally responsible for the New Family Movement of the international Focolare Movement, founded in Italy in 1943, and a member of the Vatican’s Pontifical Council for the Family.

Under the main theme, “Peacemaking in Asia,” the Seventh Assembly of the Asian Conference of Religions for Peace (ACRP) was held in Manila, the Philippines, October 17-20, hosted by the University of Santo Tomas in Manila and the Catholic Bishops’ Conference of the Philippines. Some four hundred people from twenty countries in Asia and the Pacific region representing Asia’s principal religions took part. The participants addressed the problems facing Asia, including armed conflicts, poverty, discrimination, human rights violations, and environmental destruction, and discussed practical ways to make peace.

On the last day, the participants adopted a declaration emphasizing the importance of dialogue. The declaration includes fourteen recommendations as part of an action plan for the next five years, among which are that national chapters establish centers for dialogue at universities or other educational institutions and urge their national governments to strengthen their commitment to nuclear disarmament. Following are excerpts from the declaration with slight revisions.

Conflict and Dialogue: Peace Building in Islamic Areas and the Role of Asian Religious People by Mir Nawaz Khan Marwat

Adapted from an address delivered at the International Interfaith Seminar held in Seoul, July 17-19, 2008

Toward a Larger Faith by Notto R. Thelle

Every time I have wandered around in the borderland and reached summits where I had a panoramic view of the landscape in all directions, I have been forced to ask: Can I exclude any of this? Is not this the world of my faith? Some tell me that I must reject the border zone and return home; others think that I must forget my own Christian faith in order to lead a full life on the far side of the border. This choice is impossible! If faith should demand that I forget the border zone, it would be too narrow. But if I were to cross the border for good and put down my roots in a foreign region, I would be consumed by homesickness. Faith would become rootless. . . .

Toward a Universal Ethic for Youth
The Twenty-fifth Niwano Peace Prize Commemorative Dialogue between H.R.H. El Hassan bin Talal of the Hashemite Kingdom of Jordan and Rev. Nichiko Niwano

The twenty-fifth Niwano Peace Prize was awarded to H.R.H. Prince Hassan of Jordan. Prince Hassan’s tireless interfaith advocacy and leadership in the promotion of peace based on his profound faith in Islam has won him recognition around the world. In this commemorative dialogue with Rev. Nichiko Niwano, president of the Niwano Peace Foundation, on the theme “recommended peace education for young people,” held on May 7, 2008, in Tokyo, he emphasized the importance of focusing on human security and cohesion with the poor.

Causes and Conditions behind Our Roles in Life by Nikkyo Niwano

The Sutra of the Lotus Flower of the Wonderful Law – Chapter 14: A Happy Life (2)
by Nikkyo Niwano

This is the ninety-sixth installment of a detailed commentary on the Threefold Lotus Sutra by the late founder of Rissho Kosei-kai, Rev. Nikkyo Niwano.