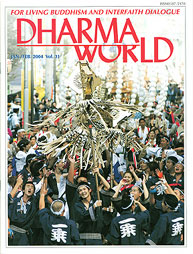 Jiho Sargent moved from California to Japan in 1978 and entered the Soto priesthood a year later. Now an assistant priest at Taisoji, a neighborhood temple in Tokyo, she is also the author of Asking About Zen (New York: Weatherhill, 2001).

There are many throughout the world who look to the Jewish, Christian, and Muslim scriptures for justification for their own violence, which they wage in the name of God. But what they fail to recognize is that it is their own thirst for justice that guarantees God’s e violence, and that the responsibility to put an end to religious violence is our own.

Robert Traer teaches ethics at Dominican University in San Rafael, California, and led the International Association for Religious Freedom (IARF) from 1990 to 2000. He is the author of Faith in Human Rights: Support in Religious Traditions for a Global Struggle (1991), Quest for Truth: Critical Reflections on Interfaith Cooperation (1999), and Faith, Belief, and Religion (2001). Dr. Traer is retired from the Christian ministry, but offers Bible study and commentary at (http://christian-bible.com/).

The Updating of the Vinaya by George A. Sioris

A conclusion is growing in some circles that the time has come to adapt the traditional rules of Buddhist discipline to the needs of the modern world. This article examines the concept of “rules” both Eastern and Western in order to help Buddhism renew itself yet keep its traditions.

George A. Sioris is the former ambassador of Greece to India, Thailand, and Japan and president emeritus of the Asiatic Society of Japan. He received an honorary doctorate in the humanities from Adamson University in Manila. He is affiliated with several universities and academic institutions in Japan and elsewhere in Asia. He is also a contributing advisor to the Japan Times. This essay is a slightly adapted portion of one of his most recent works, Monastic Discipline: Vinaya and Orthodox Monasticism–An Attempt at Comparison (Chiang Mai: The Knowledge Center, 2002).

Making Our Deeds Agree with Our Words by Nikkyo Niwano

The Joy of Faith by Nichiko Niwano

Meeting the Buddha through the medium of his teaching and emulating him is essential for cultivating the field of the heart and mind.

Theology and Dialogue in the Arena of History

Rosino Gibellini is the author of La teologia del XX secolo (The Theology of the Twentieth Century), Frontiers of Theology in Latin America, and The Liberation Theology Debate, among other works on the figures and movements in contemporary theology. He is a director of Queriniana, publisher of the Italian edition of the Roman Catholic journal Concilium. In a recent interview with Dharma World, Dr. Gibellini described his encounter with Rev. Nikkyo Niwano, the late founder of Rissho Kosei-kai, which prompted his pursuit of Catholic-Buddhist dialogue, and discussed prospects for Christian theology in the world in the twenty-first century.

A Wish-Fulfilling Kannon Beloved by Local Villagers by Takeshi Kuno

In the mountains of Niigata is a wonderful statue depicting the Wish-Fulfilling Kannon that was carved by the eighteenth-century itinerant priest and master sculptor Mokujiki Myoman.

Ananda and Rahula by Gene Reeves

All of the Buddha’s closest disciples were the first, or greatest, at doing something. Ananda was first in “listening,” and it is due to his memory that we have the sutras. Rahula was first in “quietly doing good.” If we follow their example and be the best we can be, we can help to bring about world peace and human happiness.

Gene Reeves is currently studying, teaching, and writing on Buddhism in Tokyo. A consultant and teacher at Rissho Kosei-kai, he was recently a research fellow at Rikkyo University and prior to that retired from the University of Tsukuba. Before coming to Japan in 1989, Dr. Reeves was the dean of Meadville/Lombard Theological School and professorial lecturer in the Divinity School of the University of Chicago.

Meeting the Buddha through Experience by Yasuhiro Inoue

A man who took inordinate pride in himself for starting a successful advertising agency learned humility in a painful way when business began to fail. This article is based on the speech he made in the Great Sacred Hall in September 2000.

Yasuhiro Inoue is a member of the Tsuchiura Branch of Rissho Kosei-kai.

All Things Are Impermanent by Hajime Nakamura

In this world, everything that has a beginning, even the life of the Buddha, must also have an end. No sooner did the dying Buddha lie down then the sala trees burst into blossoms that then fell upon his body. The devas gathered around him then realized that “All things that have been made are impermanent.”

The Sutra of the Lotus Flower of the Wonderful Law
Chapter 7: The Parable of the Magic City (5) by Nikkyo Niwano

This is the seventy-fourth installment of a detailed commentary on the Threefold Lotus Sutra by the late founder of Rissho Kosei-kai, Rev. Nikkyo Niwano.