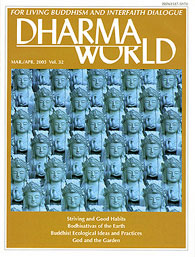 Heeding the Voices in Our Hearts by Kinzo Takemura

“All phenomena are constantly changing. Strive to practice my teachings diligently.” These are said to have been Shakyamuni Buddha’s last words. They indicate that recognizing impermanence and striving to advance spiritually are the keys to the practice of Buddhism. The following is a translation of a recent interview with Rev. Nichiko Niwano that originally appeared in Rissho Kosei-kai’s Japanese periodical Yakushin.

The Role of Faith in a Moral Life by Nikkyo Niwano

Bodhisattvas of the Earth by Gene Reeves

Chapter 15 tells of the enormous number of bodhisattvas who sprang up out of the earth, whom the Buddha explains he himself has been teaching and leading from the most remote past.

Buddhism itself is not ecology, but it contains extremely profound ecological ideas and practices. Their philosophical basis can be found in the teaching of “dependent origination.”

Wei Dedong is an associate professor at the Renmin University of China in Beijing, specializing in Buddhist philosophy and the sociology of religion. His major works include Fojiao Weishi Zhexue Yaoyi (The Essence of Yogacara Philosophy) and Fojiao De Shengtai Guan (The Ecological View of Buddhism).

God and the Garden by Kenneth J. Dale

In this essay, the author shares some of his musings and discoveries regarding the questions: Who is God? What is God? Where is God? How do we talk about God?

Kenneth J. Dale retired in Claremont, California in 1996, after spending forty-five years as a missionary and professor at the Japan Lutheran College and Seminary in Mitaka, Tokyo. He founded and directed the Personal Growth and Counseling Center of that college. He is the author of Circle of Harmony and A Seeker’s Journal: Questioning Tradition–Strengthening Faith.

Meditation and Compassion in Action by Bhikkhu Sanghasena

The Historicity of Gotama Buddha by Hajime Nakamura

Buddhists in southern Asia and those in northern Asia disagree on the most likely dates for the Buddha’s birth and death. Scholars around the world still debate the issue, but seem agreed that he usually displayed warm affection for his followers.

An American member of Rissho Kosei-kai describes how her introduction to Buddhist teachings and experience in hoza counseling sessions allowed her to confront the truth about her life.

Carol J. Ewer is a member of Rissho Kosei-kai of Oklahoma.

Small Trips of Self-Discovery by by Etsu Sakamoto, Hiroe Terauchi, and Satoe Takahashi

Three members of Rissho Kosei-kai relate how their lives have changed through their participation in training sessions at the seminar house in Ome, a western suburb of Tokyo. Within the beauty of nature, various programs–sutra chanting, hoza, lectures on the Lotus Sutra, as well as forest conservation work–were conducted during the two- or three-day sessions. Since the Ome Seminar House was established in 1966, a large number of members, including many youths, have visited it, making friends with fellow participants, discovering their inner selves, and confirming the joy of having faith.

The Sutra of the Lotus Flower of the Wonderful Law

Chapter 9: Prediction of the Destiny of Arhats, Training and Trained by Nikkyo Niwano

This is the eighty-first installment of a detailed commentary on the Threefold Lotus Sutra by the late founder of Rissho Kosei-kai, Rev. Nikkyo Niwano.