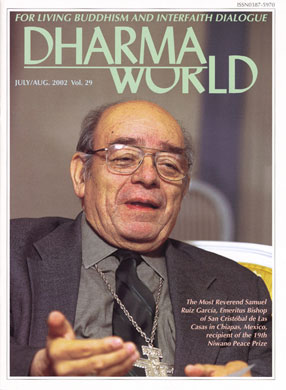 The Most Reverend Samuel Ruiz Garcia, Recipient of the 19th Niwano Peace Prize

Our Goals Have No Time Limit by Nikkyo Niwano

This essay is part of an ongoing series of translations from a volume of inspirational writings by the late founder of Rissho Kosei-kai. Dharma World will continue to publish these essays because of their permanent value as guidance for the practice of one’s faith in daily life.

Do No Evil, Do Only Good by Nichiko Niwano

The I Ching tells us that “The superior man never slackens in perfecting the self,” repeating what the Dhammapada identifies as the essence of Buddhism: “To do no evil, / To do only good, / To purify the mind.”

The Poor Are Creators of History by Samuel Ruiz Garcia

The Niwano Peace Prize, an annual award that honors individuals and groups that have contributed significantly to peace in the spirit of religion, was presented this year to the Most Reverend Samuel Ruiz Garcia, Emeritus Bishop of San Cristobal de Las Casas, Chiapas, Mexico. Bishop Ruiz has been engaged in elevating the social standing of indigenous communities in Mexico and elsewhere in Central and South America for more than forty years. The official presentation ceremony was held in Tokyo on May 9, in which 200 people took part and congratulated the recipient. Following is the text of the acceptance address by Bishop Ruiz.

Two leaders from the IARF examine its statement of purpose–“To work for freedom of religion because it enables our search for enlightenment to flourish”–and discuss what “to flourish” really means.

Andrew C. Clark is General Secretary of the International Association for Religious Freedom (IARF), a position in which he oversees an Oxford Secretariat, several regional coordinators, ten chapters, and the United Nations offices in both New York and Geneva. From 1982 to 1999 he was General Secretary of the British Quakers’ international peace work on four continents.

Zarrin T. Caldwell is Issues and Research Coordinator at the Oxford Secretariat of the IARF. In this position, she monitors religious freedom issues throughout the world and assists the General Secretary with special projects. She formerly worked for several years at the Washington office of the United Nations Association in the United States.

Religion: A Force for Harmony or Hatred? by Harold Kasimow

A noted American scholar of religion suggests that a new understanding of the world’s sacred texts is essential to lead to accurate knowledge about religions and to dialogue between them.

Harold Kasimow is the George A. Drake Professor of Religious Studies at Grinnell College, Grinnell, Iowa. He is currently completing a book titled Beside Still Waters: Jews, Christians, and the Way of the Buddha. It is coedited with John and Linda Keenan.

Buddhism and Work by Damien Keown

Work is such an integral part of lives that even Shakyamuni exhorted his disciples to “strive diligently.” Here a British author/educator shows how today’s idea of “decent work” is in harmony with that teaching.

Damien Keown is Reader in Buddhism at Goldsmiths College, University of London. He studied comparative religion at Lancaster University and completed his doctorate on Buddhism at Oxford University in 1985. He is the author of many books and articles on Buddhist ethics and is co-founder of the online Journal of Buddhist Ethics (jbe.gold.ac.uk).

A popular Japanese writer takes a look at the world around him and is reminded by nature of Shakyamuni’s last admonition to his disciples to “always endeavor to practice diligently.” This essay is based on a text of a speech delivered in the Fukushima Branch of Rissho Kosei-kai on December 2, 2001.

Wahei Tatematsu is a popular novelist and essayist whose recent works include Budda Sono Hito e (A Journey to the Buddha), Butsudeshi Monogatari (Tales of the Buddha and His Disciples), and Hikari no Ame (The Rain of Light). An active writer who has traveled extensively around the world, Tatematsu has also produced numerous travel volumes, photo essays, and illustrated books.

The EnchantingWorld of the Lotus Sutra (2) by Gene Reeves

This article represents the second installment in a new series of essays devoted to stories in the Lotus Sutra. Written by an American researcher on Buddhism and the Lotus Sutra, it offers fresh insights into how we can incorporate the teachings found in the sutra’s dramatic stories in our daily lives.

The Strength to Live Through Repentance by Hiroaki Ito

Hamamatsu Branch member Hiroaki Ito, shocked to hear his brother say, “I have always hated my elder brother,” tells how hearing it gave him a change of heart that changed his life.

Hiroaki Ito is a member of the Hamamatsu Branch of Rissho Kosei-kai in Shizuoka Prefecture.

A 1,000-Armed Kannon of the Kamakura Period by Takeshi Kuno

The Thousand-Armed Kannon of Sanjusangendo is very important, not only as a representative example of Tankei’s work, but also as a great masterpiece of Japanese sculpture.

The wealthy Licchavi nobles of Vesali met Ambapali on the road and tried to buy from her the right to be the first to invite Shakyamuni to dinner–only to learn that their riches could not buy everything.

The Sutra of the Lotus Flower of the Wonderful Law
Chapter 5: The Parable of the Herbs (2) by Nikkyo Niwano

This is the sixty-fifth installment of a detailed commentary on the Threefold Lotus Sutra by the late founder of Rissho Kosei-kai, Rev. Nikkyo Niwano.