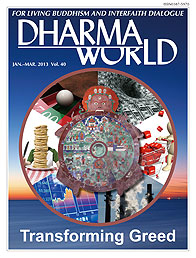 Material well-being of course is important for a secure, fulfilled life, to which all people have the right. Excessive desire for material well-being, however, most often brings unhappiness to oneself and others.

The current troubled global economy has long been sustained by making the most of people’s desire for abundance and convenience. Strong commercialism helped by deregulation of the financial markets over the past few decades has created new billionaires but left other billions of people much worse off, some of them even in dire poverty. It has also seriously degraded the environment, and future generations will bear the consequences.

The world economy sustains itself by constantly fueling consumers’ desires and is based on an economic structure that approves of and even encourages greed, under the guise of the need for economic growth.

Buddhism considers greed one of the three poisons afflicting all people. When greed involves corporate organizations, nation states, and global markets, it can cause appalling suffering. Today greed has become virtually normal in society as a whole and has permeated economic structures to a degree of which people are often unaware.

In our special feature on greed, we hope to deal with a problem that has troubled many religious traditions since time immemorial, but needs our renewed attention. How should we people of religion become aware of and find antidotes to the poison of greed? How can we affect the mainstream economy, and what alternatives can we present? From a Buddhist point of view, how can greed be transformed into generosity? Can the world’s religions work together for that transformation?

“Engaging Structural Greed” was the theme of the consultations that the Lutheran World Federation held jointly with the World Council of Churches in Thailand in 2010, and again independently in Malaysia in 2011, in which religious leaders and scholars of Buddhism, Christianity, and Islam took part.