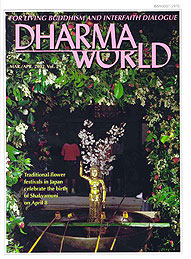 Celebration of the Anniversary of Shakyamuni’s Birth

Ridding Ourselves of the Defilements by Nikkyo Niwano

Removing the Framework of Ego by Nichiko Niwano

Self-attachment or egocentricity means seeing and thinking about things in reverse order, being bound to a rigid way of thinking. It is a sign of an impoverished spirit.

Women in War and Peace: Victims but Not Negotiators? by Azza Karam

Despite many years of suffering, the women of Afghanistan only became “visible” after world media focused on the plight of their nation as a whole. The common understanding is that war is a man’s game.

An American philosopher warns that the heightened emotions of the “war on terrorism” can lead to serious delusions. It is time, he says, that people seek to take control of events.

Joseph Grange is professor of philosophy at the University of Southern Maine, Portland, ME, U.S.A. He completed his Ph.D. at Fordham University and is a leader in the field of comparative philosophy. He is the author of a number of books, among which are two volumes, Nature: An Environmental Cosmology and The City: An Urban Cosmology, both published by the State University of New York Press.

The Case for Religion by Jamshed K. Fozdar

Today, if the past and present vilify religion because of . . . sects and creeds–of “the many” where there should be one . . . –religion vindicates itself by answering that its “vilifiers” search their hearts and history.

Jamshed K. Fozdar is a consultant in the field of telecommunications and a member of the Professional Engineers Board of Singapore. Until recently he served as the honorary secretary of the Inter-Religious Organization of Singapore. He is also a member of the Executive Committee of the Asian Conference on Religion and Peace (ACRP).

An Austrian Buddhist leader says it is now time to reconsider critically the attitude of Buddhism toward modern society.

Myoshin-Friedrich Fenzl, leader of the Jodo-Shin movement in Austria, is the founder and deputy chairman of the Buddhist Society of Salzburg, which promotes a variety of Buddhist and interreligious activities, including meditation sessions, lectures, video performances, annual Buddhist festivals, religious education for children and youth, and hospital chaplaincy.

Everyone Has an Equal Right to Education

Last December, during a three-day session of the NGO Conference in Tokyo on the Reconstruction of Afghanistan, representatives of twenty-seven Afghan NGOs discussed with members of Japanese NGOs longterm comprehensive plans for post- conflict recovery and reconstruction of that country. Palwasha Hassan participated in the meeting representing the Afghan Women’s Educational Center (AWEC), an Islamabad-based NGO established in 1991, that promotes women’s education, protection of women’s rights, medical care, and income generation for women. Ms. Hassan is the director of the AWEC-affiliated Center for Street Children and Women in Peshawar, Pakistan. During an interview with Dharma World and reporters for the Japanese mass media, she described her hopes for creating better opportunities for education, particularly for women and children, to ensure enduring social reconstruction efforts at the hands of the Afghans themselves.

A woman who has faced the ordeal of surgery and chemotherapy to halt her cancer has learned to be grateful for being given life–and to stop blaming others.

Noriko Uchida is a member of the Saitama Branch of Rissho Kosei-kai.

A Fierce Pair of Goblins by Takeshi Kuno

The carver of one of these early Kamakura period statues was the great Koben, but the sculptor of the other remains unknown. Regardless, together they are superb and lively examples of the sculpture of their time.

People strive to move beyond the difficulties of life and cross to the other side, but there are various methods for reaching the ideal realm.

The Sutra of the Lotus Flower of the Wonderful Law
Chapter 4: Faith Discernment (4) by Nikkyo Niwano

This is the sixty-third installment of a detailed commentary on the Threefold Lotus Sutra by the late founder of Rissho Kosei-kai, Rev. Nikkyo Niwano.