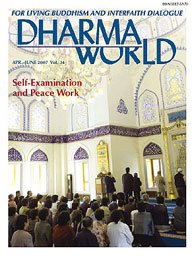 The Road to Peace through Self-Examination by Keiji Kunitomi

Keiji Kunitomi is director of the General Secretariat of Rissho Kosei-kai and a member of the organization’s Board of Directors.

To be a peacemaker, you need to understand the deeper dimensions of the conflict or struggle, and you need to see with your heart. There is a role for empathy, not only for intellect.

The Most Reverend Gunnar Stalsett, bishop emeritus of Oslo of the Church of Norway, was formerly a member of the Nobel Peace Prize Committee. He now serves as the chair of the Niwano Peace Prize Committee. Bishop Stalsett has been actively involved in efforts for reconciliation and peace building as a president of Religions for Peace and the moderator of the European Council of Religious Leaders.

Shinto, Self-Examination, and Religion as Tools for Political Control by Caitlin Stronell

I was born in a strictly atheist household and, even though I attended a Christian secondary school, I spent most of the time asking difficult questions about why Mother Mary had to be a virgin and railing against what I felt to be the inherent conservatism of the Christian establishment and values. I was very much involved in the environmental movement at the time, . . .

Caitlin Stronell moved to Japan from Australia in 1990 and received her master’s degree in law from Keio University in 1997. She has worked for the labor movement and NGOs in Japan in a wide variety of fields, including environmental issues and HIV/AIDS. She started training to become a Shinto priest at the Asakawa Konpira shrine in western Tokyo in 2000 and received official qualification from the head Konpira shrine in 2002.

Partners in Prayer and Peacemaking An Interview with Rev. William G. Sinkford

Rev. William G. Sinkford was in Tokyo in November 2006 to attend the ceremonies celebrating the centennial of the birth of Rev. Nikkyo Niwano, the late founder of Rissho Kosei-kai. During his stay, DHARMA WORLD interviewed him on the significance of self-examination by people of religion in today’s troubled world and the approach of the Unitarian Universalist Association (UUA) to the religious diversity in American society.

Master Jue Xing was among the guests at a centennial celebration of Founder Nikkyo Niwano’s birth in Tokyo last November. DHARMA WORLD met with Master Jue Xing at his hotel, and he spoke to us about the importance of friendly exchanges between Chinese and Japanese Buddhists and of self-examination by people of faith.

Learning from My Family

Invaluable lessons can be taught by the members of every generation. Most important is the essential role of forgiveness in all relationships.

Robert Traer served as general secretary of the International Association for Religious Freedom from 1990 to 2000. He is the author of several books, including Faith, Belief, and Religion and Jerusalem Journal: Finding Hope , and co-author of Doing Ethics in a Diverse World with Harlan Stelmach. Dr. Traer teaches courses on ethics and religion at the Dominican University of California.

Religions Are Crucial to Attaining Peace by Christina Lee

Dedicating one’s life to the cause of peace is a commitment not to be taken lightly. It calls for courage, for knowing how to suffer.

World Peace Begins in Your Mind by Tulku Thondup Rinpoche

The mind is the main factor. It moves quickly and is the forerunner of all acts. Whatever you say or do with a pure mind, happiness is sure to follow. –The Buddha

Ven. Tulku Thondup Rinpoche, born in Golok, Eastern Tibet, was a visiting scholar at Harvard University (1980-83) and has since been living in the United States, engaged in scholarly work on Tibetan Buddhism. He travels in North America, Europe, and Asia, teaching Buddhism and leading workshops on healing and dying. He has published more than a dozen books on Tibetan Buddhism.

Grasping the Heart of Buddhism by Nichiko Niwano

Buddhism is the teaching of awakening. It is something we achieve, and savor the joy of, for ourselves. When we can convey that joy to others, we can say we have a self-reliant faith.

When fundamental religions and political realities are distorted, the impact in the public arena is profound.

Robert F. Smylie served from 1975 to 2002 as the Presbyterian Church’s representative to the United Nations. Following his retirement, he worked as the director of the Disarmament Program of the World Conference of Religions for Peace. He has been a visiting professor at the Ecumenical Institute in Geneva, Switzerland, and a faculty fellow at New College, Edinburgh, Scotland.

Zen: Meditation and Simplicity as a “Sacrament” by Notto R. Thelle

Zen does not transcend the human consciousness in a search for “higher” value, this author says. On the contrary, one is summoned back to the original awareness, to this world.
Notto R. Thelle, D.Th., is a professor in the Faculty of Theology, the University of Oslo, Norway. Having studied Buddhism at Otani University in Kyoto, he acted as associate director of the NCC (National Christian Council) Center for the Study of Japanese Religions in Kyoto from 1974 to 1985, where he was a visiting scholar in 1999 and 2000.

An Engaged Buddhist View of Shared Security by Sallie B. King

What might Buddhists have to offer a world longing for security in an age of violence? This is an important but daunting topic for Buddhists! What can Engaged Buddhists, who are either pacifist or pushing as much as possible in the pacifist direction, have to offer to a world so overrun with violence and war? In the Dhammapada, the Buddha taught that hatred cannot be overcome by hatred; hatred can only be overcome by non-hatred. So perhaps Buddhists may have something to offer a violent world, after all. . . .

Sallie B. King is professor of philosophy and religion at James Madison University in Harrisonburg, Virginia. She is a trustee of the international interfaith Peace Council and former president of the Society for Buddhist-Christian Studies. She has published widely on Buddhism, the cross-cultural philosophy of religion, and Buddhist-Quaker relations.

At its historic Eighth World Assembly in Kyoto last year, Religions for Peace delegates addressed what is perhaps the most urgent challenge of our time: “Confronting Violence and Advancing Shared Security.” The notion of “shared security,” or “human security,” was defined as “protecting the vital core of all human lives in ways that enhance human freedoms and human fulfillment,” and, more succinctly, as the “freedom from fear and freedom from want.” In these remarks, I would like to illustrate these ideas with four examples from the Buddhist tradition: the commitment formula of “taking refuge” in the Buddha, Dharma, and Sangha; the image of shared community in the opening scene of the Lotus Sutra; the mass conversion of Dalits–formerly the “untouchables”–to Buddhism; and Rev. Nikkyo Niwano’s discourse on the notion of jihi–“benevolence, a sense of oneness, the lack of a barrier between oneself and others”–the psychological and spiritual basis of shared security for our time.

Christopher S. Queen is lecturer on the study of religion and the dean of Students and Alumni Relations for Continuing Education in the Faculty of Arts and Sciences, Harvard University. Dr. Queen earned degrees in the history and phenomenology of religion from Oberlin College, Union Theological Seminary, and Boston University. His publications include Engaged Buddhism in the West.

The Sutra of the Lotus Flower of the Wonderful Law Chapter 12: Devadatta (2) by Nikkyo Niwano
This is the ninetieth installment of a detailed commentary on the Threefold Lotus Sutra by the late founder of Rissho Kosei-kai, Rev. Nikkyo Niwano.