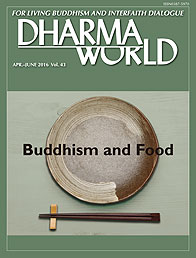 Today, both in advanced and developing countries, unbalanced and irregular diets have caused obesity; lifestyle-related diseases, including diabetes; and high blood pressure. Eating disorders caused by mental stress are also a serious problem in many countries.

While a third of all food produced in the world is reported discarded or left to spoil, almost a billion people do not get enough to eat. This situation accompanies a waste of labor and energy in producing food and puts stress on the global natural environment. Grains such as wheat and corn have become targets of profiteering on the global stock market.

In these circumstances, some people are looking to Buddhism for the knowledge and means to make their diet healthier for their body and mind as well as the world they live in. Some people, for example, try a vegetarian cuisine developed in Zen monasteries in Japan called shojin ryori. Other people seeking a healthier diet try “mindful eating,” an approach rooted partly in Buddhism that encourages full concentration on the process of eating.

Food is one of the three basic necessities of life, along with clothing and shelter. Can Buddhism, which advocates the control of excessive desires, including gluttony, address today’s issues related to food, at both the individual and global levels? With this question in mind, we will explore relations between Buddhism and diet, overviewing Buddhist attitudes to food and eating.