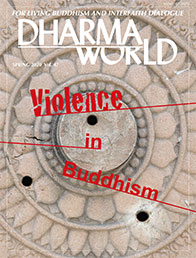 Buddhism is generally considered a religion that is tolerant and moderate. Compared with Christianity or Islam, the histories of which are often associated with such notions as proselytization and confrontation, Buddhism is thought to be accommodating toward other faiths. Is Buddhism worthy of this reputation?

“Not to take life” is the most important precept that Buddhists follow. Forbearance, one of the Six Perfections, means to patiently endure when one is the object of any kind of insult or persecution without giving rise to anger. For Buddhists, the use of violence is “evil” and to be deeply regretted.

In actuality, however, Buddhists may approve of the use of force to protect people’s lives from violence by criminals. When one is attacked by others, Buddhists may think that one is entitled to use force if that is the only way to defend oneself. Does it mean nonviolence depends on the circumstances?

In medieval Japan, Buddhists utilized violence to rebel against oppression by feudal lords. During the Second World War, most Buddhist sects supported Japan’s war effort as a means to establish the Dharma in East Asia, praying for victory, sending their priests as chaplains, or having the priests preach to people to convince them of the validity of the war. Does it mean that nonviolence can fall into a forlorn ideal under the pretext of protecting the Dharma from evil?

As an individual human being and members of the global community—and as committed followers or supporters of Buddhism—we must take another look at the concept of nonviolence and its significance to a fundamental ethic necessary to build peace in our contemporary world.