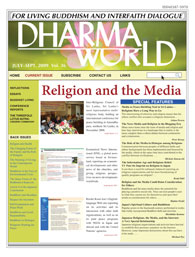 Religion and the Media

In a certain sense, all religions since their inception have engaged in public relations activities. This is because public relations are part of missionary work itself. Naturally enough, missionary work was originally based on face-to-face conversations in which one person transmitted religious teachings to another. However, as times have changed, the range of methods for transmitting religious teachings has broadened. . . .

Takeshi Kawabata is director of the General Affairs Bureau of Rissho Kosei-kai in Tokyo.

The intertwining of ethnicity and religion means that the ethnic conflict also occupies a religious dimension. The politicization of religion has thus become a major impediment to peace building.

Jehan Perera is executive director of the National Peace Council of Sri Lanka, an organization that works for a negotiated political solution to the ethnic conflict in the country. He is also a political columnist for the Daily Mirror and Divaina newspapers. He was awarded the inaugural Sakai Peace Contribution Award by the city of Sakai, Japan, in 2008. Dr. Perera completed this essay as the Sri Lankan government announced its May victory over the separatist Tamil Tigers, ending the country’s twenty-six years of civil war.

Many news items raise the issue of media and religion and how they intertwine in a landscape that in reality is far more complex than a robust debate between creationists and evolutionists.

Peter Kenny is editor-in-chief of Ecumenical News International, an independent news agency specializing in religious news that is backed by international church groups. He began his journalist career on South African newspapers and then worked for Agence France-Presse in southern Africa for five years. This was followed by nine years in Europe and Asia with United Press International, where he was serving as its Tokyo bureau chief when he left the wire service in 1999.

Communication between peoples of different faiths and ethnic backgrounds has been implemented and fostered by the media, which at the same time have contributed to the conflict between civilizations.

Michele Zanzucchi is a journalist and writer who has published some thirty books. He is the editor of Città Nuova, the Italian edition of the Focolare Movement’s magazine, which is published in twenty-two languages. He teaches media at the Sophia University Institute in Loppiano, near Florence, and journalism at the Pontifical Gregorian University in Rome.

The Information Age and Religious Belief: TV Puts Its Imprint on Religion in Japan by Kenji Ishii

Is there not a need for unbiased, balanced reporting on religious organizations and for more broadcasting of quality programs on religion?

Kenji Ishii is a professor in the Faculty of Shinto Studies of Kokugakuin University in Tokyo. He specializes in religious studies and the sociology of religion. He is the author of many books on Japanese religion, including Ginza no kamigami: Toshi ni tokekomu shukyo (The gods in Ginza: Religions integrated into the cities) and Sengo no shakai hendo to jinja Shinto (Japan’s postwar social changes and Shrine Shinto).

Buddhism and the mass media share the potential for playing a positive social role. They can turn people’s eyes to what they cannot see for themselves and open their minds to consideration for others.

Hajime Ozaki reported mainly on global affairs and multilateral diplomacy from Israel and the United States as a Kyodo News correspondent for more than twenty years. Back in Tokyo he covered the 9/11 attacks in the United States at the foreign news desk until he was assigned to the Geneva bureau. Since December 2007, he has been serving as the Maebashi bureau chief in Gunma Prefecture.

Japan’s Spiritual Culture and Buddhism: The Religious Outlook of the Japanese as Seen through the Performing Arts by Michihiko Komine

Popular actors in the fourteenth century performed in works that richly incorporated Buddhist faith and doctrine. While being entertained, audiences simultaneously learned the ideas of Buddhism.

Michihiko Komine is head priest of Kanzo’in in Tokyo, a temple belonging to the Chisan branch of the Shingon sect of Japanese Buddhism and president of Taisho University in Tokyo. His special fields are early Mahayana Buddhism and the Shingon Buddhist doctrine. He is the author of numerous books on esoteric Buddhist paintings.

Japanese Religions, the Media, and the Internet: A Very Special Relationship by Michael Pye

Japanese religious organizations and activists have hurried to establish their presence somehow on the Internet. However, some important distinctions about this use have to be made.

Michael Pye was professor of religious studies at the University of Marburg, Germany, until 2004. He is now a visiting professor at Otani University, Kyoto. From 1995 to 2000, Dr. Pye served as president of the International Association for the History of Religions. His books include Skilful Means: A Concept in Mahayana Buddhism and MacMillan Dictionary of Religion.

The Niwano Peace Foundation presented the twenty-sixth Niwano Peace Prize to Canon Gideon Baguma Byamugisha, an Anglican priest in Uganda. Rev. Byamugisha was honored for his endeavors to uphold the dignity and human rights of people with HIV/AIDS. The presentation took place on May 7 at the Foreign Correspondents’ Club of Japan in Tokyo. Because of the international swine flu alert, Rev. Byamugisha, who is HIV-positive, did not attend the ceremony. On his behalf, the Most Rev. Nathaniel Makoto Uematsu, primate of the Nippon Sei Ko Kai (Anglican Episcopal Church in Japan) accepted the prize. Following are excerpts of the acceptance address that Rev. Byamugisha had prepared for the presentation ceremony.

Canon Gideon Baguma Byamugisha, who was born in 1959, learned in 1991 that he was HIV-positive. He was the first African priest to declare publicly that he was HIV-positive, breaking one of the most important barriers in the struggle against HIV, that of stigma-induced silence. Rev. Byamugisha has helped to raise public awareness of the disease in a way that has brought distinction to religious and cultural communities in his own country, Uganda, across the African continent, and on a global level. He is the canon of two cathedrals, in Uganda and Zambia, and works through many other channels to fight injustice, with a special focus on children.

The Bodhisattva Practice and Lotus Sutra-Based New Religions of Japan: The Concept of Integration by Susumu Shimazonov

Susumu Shimazono is a professor in the Graduate School of Humanities and Sociology at the University of Tokyo. His special fields are the comparative study of religious movements and the history of religion in modern Japan. He has also taught as a guest professor at universities in the United States, France, Germany, and Egypt. He is the author of numerous books on religion, spirituality, and bioethics.

The Importance of Knowing One’s Self by Nichiko Niwano

When our concern about affairs outside ourselves grows, we become likely to neglect our precious inner lives.

The One Fundamental Principle of All Religions by Nikkyo Niwano

The Sutra of the Lotus Flower of the Wonderful Law Chapter 15: Springing Up out of the Earth (1) by Nikkyo Niwano

This is the ninety-eighth installment of a detailed commentary on the Threefold Lotus Sutra by the late founder of Rissho Kosei-kai, Rev. Nikkyo Niwano.