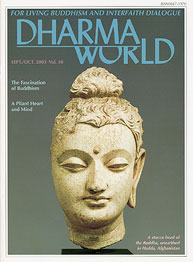 Speaking the Dharma by Nikkyo Niwano

A Pliant Heart and Mind by Nichiko Niwano

Patience is a quality that helps us make our way through this world in which we live.

The Fascination of Buddhism by Raimundo Panikkar

The Buddha’s Middle Path is neither mundane nor religious, as “religion” was understood in his time. It is the path of balance, of harmony, of impartiality, of serenity.

Raimundo Panikkar is professor emeritus of religious studies at the University of California, Santa Barbara. Born in Spain to Catholic and Hindu parents, he is an authority on the dialogue between Christianity and Asian religions. Dr. Panikkar’s books include The Cosmotheandric Experience (Orbis, 1993) and The Intrareligious Dialogue (Paulist, 1978). He is also a consultant to UNESCO on interreligious dialogue. He has won Spain’s Premio Espiritualidad, as well as Italy’s prestigious Nonino Prize, which recognized his lifelong “academic and spiritual contributions.”

In Search of Our Common Truth by Jehangir Sarosh

The author describes his passionate belief that it is the major responsibility of religions to be the means of bringing forth peace, reconciliation, and harmony.

Jehangir Sarosh is moderator of the World Conference on Religion and Peace–Europe (WCRP/Europe) and a member of the Executive Committee of the World Congress of Faiths (WCF). He also serves as vice chair of the Week of Prayer for World Peace and is an Executive Committee member of the Interfaith Network of Great Britain. He has been nominated as interfaith representative of the Zoroastrian Trust Funds of Europe (the principal body of the Zoroastrian community in Europe).

Dialogue and Cooperation among Religions by Gianfranco Rossi

All types of differences among us should be seen as sources of humanity’s wealth. Those who disagree with us are not our enemies–they are actually our co-workers in the search for peace.

Gianfranco Rossi has been an activist for religious freedom since 1954. Since 1981, he has cooperated with the United Nations in Geneva, by intervening in favor of religious freedom at the UN Commission on Human Rights. Dr. Rossi has also discussed problems concerning this fundamental freedom with government representatives in Geneva and in many countries, adding contributions to some important solutions.

The Power of Prayer Is Greater Than We Can Imagine

An interview with Priscilla Elworthy

In May this year, the 20th Niwano Peace Prize was awarded to Dr. Priscilla Elworthy, founder and director of the Oxford Research Group (ORG). The ORG is a nongovernmental organization in the United Kingdom that studies nuclear issues and is a well-known authority on nuclear disarmament and peace strategies. One of the particular characteristics of the ORG is the adherence of Dr. Elworthy and many of its members to the pacifist beliefs of the Religious Society of Friends. Dharma World interviewed her on May 6, when she visited Japan with her colleague, Rosie Houldsworth, to receive the award.

What Can People Do to Stop War? by Priscilla Elworthy

This is the text of the keynote address, by the recipient of the 20th Niwano Peace Prize, delivered at the Kyoto Symposium of the Niwano Peace Foundation, held on the theme “Citizens Working for Global Security” on May 10.

A Fantastic Castle by Gene Reeves

The goal of the Buddha Dharma is not a static achievement, a place where one can rest permanently. It is a way of life and a never-ending challenge.

Gene Reeves is currently studying, teaching, and writing on Buddhism in Tokyo. A consultant and teacher at Rissho Kosei-kai, he was recently a research fellow at Rikkyo University and prior to that retired from the University of Tsukuba. Before coming to Japan in 1989, Dr. Reeves was the head of Meadville/Lombard Theological School and professorial lecturer in the Divinity School of the University of Chicago.

Meeting Adversity with a Calm Heart by Kim Tae Hee

On May 26, 2002, a Rissho Kosei-kai member in South Korea spoke to the organization’s Busan chapter about the personal difficulties that at last led her to gratefully accept the Buddha’s teachings.

Kim Tae Hee is a member of the Busan chapter of Rissho Kosei-kai of Korea.

At a small temple in southwestern Tokyo are found exquisite statues of Shakyamuni, Maha-Kashyapa, and Ananda carved by the sculptor Genkei, together with statues of over five hundred arhats.

The Buddha Suffers from Food Poisoning by Hajime Nakamura

The blacksmith Cunda served Sakyamuni a dish that made him extremely ill and eventually would lead to his death. But whether the sukara-maddava he ate was “tender pork” or “poisonous mushrooms” remains unclear.

The Sutra of the Lotus Flower of the Wonderful Law
Chapter 7: The Parable of the Magic City (3) by Nikkyo Niwano

This is the seventy-second installment of a detailed commentary on the Threefold Lotus Sutra by the late founder of Rissho Kosei-kai, Rev. Nikkyo Niwano.