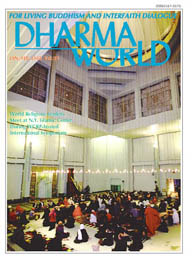 Lessons Learned from What May Seem Dirty by Nikkyo Niwano

We Can Change Ourselves by Nichiko Niwano

Human beings are capable of both good and evil. No one can claim that he or she alone is absolutely right. By the same token, everyone has an essential role in life.

A German Christian theologian points out the dangers of blaming an entire religion for the criminal acts of a small minority of fanatics. In doing so, he also describes the progress of the multinational, multireligious Global Ethic Project.

Gunther Gebhardt is a German-born Christian theologian. He received his doctorate from Fribourg University in Switzerland with a thesis on peace education in religious peace movements. From 1984 to 1997, he was European secretary-general of the WCRP at Geneva; and from 1997 to 1998, executive secretary of the Swiss Institute for Development at Biel. Since 1998 he has been academic program coordinator of the Global Ethic Foundation at Tubingen, Germany.

The Equality of All That Lives by Jion Abe

A recently deceased Japanese Zen priest and scholar of Indian philosophy here explores the roots of the Buddhist concept of peace, which respects all forms of life and advocates their shared existence.

Jion Abe, who died on January 24, 2001, obtained his Ph.D. from the University of Pune and studied also at the Bhandarkar Oriental Research Institute, both in India. He completed doctoral studies at the University of Tokyo, where he specialized in Indian philosophy. He was a professor in the Department of Literature at Meiji University in Tokyo and priest-in-charge of the Soto Zen temple Mokusen-ji in Kamakura.

A revival of interest in the work of the American writers who constituted the “Beat Generation” of the ’50s and ’60s is focusing renewed attention on the serious Buddhist elements in Jack Kerouac’s writings.

Miriam Levering was educated in history and the comparative history of religion at Wellesley College and Harvard University, where she received her Ph.D. in 1978. She teaches Buddhism, Chinese and Japanese Religion at the University of Tennessee in Knoxville, Tennessee. She has edited a book called Rethinking Scripture (1989), a study of the concept and use of sacred texts in the major religious traditions, and has written many articles on women and gender in Ch’an and Zen Buddhism.

A Reawakened Awareness of Family Love

A wife and mother who was having difficulties with her second daughter was also confronted by her husband’s increased drinking-only to then be told that she herself had developed final-stage cancer.

Kiyoko Mikuriya is a member of the Yokkaichi Branch of Rissho Kosei-kai in Mie Prefecture.

This graceful statue from the Kamakura period (1185-1333) of one of Japan’s most beloved bodhisattvas was carved by the noted sculptor Kaikei (fl. late twelfth-early thirteenth century). Excellently preserved, it retains its original beauty.

Buddhism developed because of Gotama’s focus on lay people. It was the community of the ordained, however, that converted the “Last Journey” into a scripture, blurring the contents of the teaching given to lay people.

The Sutra of the Lotus Flower of the Wonderful Law
Chapter 4: Faith Discernment (3) by Nikkyo Niwano

This is the sixty-second installment of a detailed commentary on the Threefold Lotus Sutra by the late founder of Rissho Kosei-kai, Rev. Nikkyo Niwano.