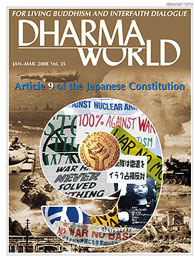 Article 9 of the Japanese Constitution

With a view to the political stability of Afghanistan and Iraq, Japan’s stance on its international contribution is being widely debated. The Japanese government wants to ensure that the Maritime Self-Defense Force is able to continue supplying fuel and water to U.S. and British naval vessels in the Indian Ocean, but the nation’s opposition parties insist that only activities that come under a UN mandate are permissible if members of the Self-Defense Forces are to be sent abroad, arguing that their recent mission has been unconstitutional. . . .

Takeshi Kawabata is director of the External Affairs Department of Rissho Kosei-kai.

The nation can achieve more by actively giving aid to developing countries and working hard to ease the problems that create breeding grounds for terrorism and violence, eliminating international disputes that are their root causes.

Until March 2007, Yoshiaki Sanada served as a professor of law at Chuo University in Tokyo, where he is now professor emeritus. He taught Western legal history and comparative law at the university’s School of Law. He also has been a guest professor at the Institute of Comparative Law of the China University of Politics and Law in Beijing. He is director of the Peace Research Institute of the Japanese Committee of the World Conference of Religions for Peace.

Article 9 of Japan’s Constitution: An Example of Prophetic Realism by Geiko Muller-Fahrenholz

It would be a tragic error to reverse the document’s pro-peace component on the grounds that it is idealistic or impractical.

Geiko Muller-Fahrenholz is a German Protestant theologian who has studied and worked in the United States, the United Kingdom, Switzerland, and Costa Rica. Dr. Muller-Fahrenholz is now the World Council of Churches’ coordinator for the International Ecumenical Peace Convocation scheduled for May 2011. His research is in the areas of reconciliation politics, fundamentalism, and ecological ethics.

The author stresses that in these unsettled times, we must reflect on the current dangers to international peace and security and examine what steps have to be taken.

Jayantha Dhanapala was the United Nations under-secretary-general for disarmament affairs from 1998 to 2003 and is a former ambassador of Sri Lanka to the United States. He serves as senior advisor to the president of Sri Lanka. From June 2004 to November 2005, he served as the secretary-general of the Secretariat for Coordinating the Peace Process in Sri Lanka.

Article 9 of the Japanese Constitution: The Foundation of Peace in Asia by Byun Jin-heung

A leader in religious education on the Korean peninsula fears that a constitutional revision by Japan could portend a dangerous shift to the right.

Byun Jin-heung is secretary-general of the Korean Conference on Religion and Peace (KCRP). He teaches the religious policy of North Korea and the reunification of the Koreas at the Catholic University of Seoul. Dr. Byun is in charge of religious-dialogue affairs among the seven major religions in South Korea and has also been devoted to religious exchange between North and South Korea for a decade.

A Buddhist View of Revising Japan’s Constitution by Ryumyo Yamazaki

Rather than changing the Constitution to legalize the waging of war, the author believes that Japan should renounce the menace posed by military power and work for peace.

Ryumyo Yamazaki, a professor at Musashino University in Tokyo, teaches the history of Japanese thought in the Middle Age and Jodo Shin Buddhism. He also serves as director of the Institute of Buddhist Culture at the university and vice director of the Peace Research Institute, which is affiliated with the Japanese Committee of the World Conference of Religions for Peace. This essay is a translation from the author’s article published in June 2007 issue of Daihorin (great Dharma wheel), a Japanese Buddhist magazine.

Article 9 and Article 26: Twin Campaigns to Move the World toward Peace and Social Justice by Colin Archer

Colin Archer has been a peace, development, and social-justice activist for more than thirty-five years and has served as secretary-general of the International Peace Bureau since 1990. He was heavily involved in the World Court Project and Abolition 2000 (coalitions against nuclear weapons), the Hague Appeal for Peace conference in 1999, and the Global Campaign for Peace Education.

Instead of taking risks with arms, please take major risks for peace and disarmament,” the late Rev. Nikkyo Niwano, founder of Rissho Kosei-kai, eloquently stated to the world political leaders at the First Special Session of the United Nations General Assembly devoted to Disarmament (SSOD I), which was held at the UN headquarters in New York in 1978. This historical moment was the genesis of Rissho Kosei-kai’s genuine commitment to disarmament, particularly nuclear disarmament. Since then, Rissho Kosei-kai has been engaged in various initiatives in the pursuit of a world free of nuclear weapons in collaboration with the UN, while the late Founder Niwano addressed the participants of SSOD II and SSOD III convened by the UN in 1982 and in 1988, respectively. . . .

Some limitations are necessary. We must not turn back, but rather proceed forward. Abandoning principles would in no way help to reach greater international stability

Agostino Giovagnoli is a member of the Council of Presidency and director of the Asian Department of the Community of Saint Egidio. Professor of contemporary history, he is director of the Department of Historical Sciences in the Catholic University of Milan. He carried out research on international relations, especially colonization, the Cold War, and globalization, with a special regard to religions.

A Buddhist View of Article 9 by Koichi Kita

A Japanese Buddhist who went to school amid a militaristic wartime and who experienced the fear and destruction of repeated air raids explains why Article 9 must be preserved.

Koichi Kita is former director of the Chuo Academic Research Institute of Rissho Kosei-kai in Tokyo. He now serves as a lecturer on Buddhism on many occasions.

The Value of Article 9 for Japan and for All People by Vernon C. Nichols

Supporters of the article’s retention are challenged to mobilize public opinion, overcoming the attitude brought by the passage of time and the fading memories of the horrors of World War II.

Vernon C. Nichols was president of the NGO Committee on Disarmament, Peace, and Security for twelve years and served as co-president for the last three years. A retired Unitarian Universalist minister, he served congregations in Manhasset, NY; Ottawa, ONT; West Hartford, CT; and Southfield, MI. He and his wife, Susan, were co-executive directors of the Unitarian Universalist United Nations Office from 1986 to 1993. He has also been active in the International Association for Religious Freedom.

David Atwood, Ph.D. in political science, is director and representative for disarmament and peace at the Quaker United Nations Office (QUNO) in Geneva. The QUNO offices in New York and Geneva serve as a Quaker presence at the United Nations, representing Friends’ concerns at the international level. On completing his degree, Dr. Atwood taught political science at the University of North Carolina and at Earlham College in the United States, and was tutor in peace studies at Woodbrooke College in Birmingham, U.K. He has also served as general secretary of the International Fellowship of Reconciliation, headquartered in the Netherlands. Recently, Rissho Kosei-kai’s representative in Geneva, Mr. Yasutomo Sawahata, interviewed Dr. Atwood on the roles of nongovernmental organizations in international disarmament efforts as well as on how he views the Japanese Constitution, which is now under strong pressure for revision.

Security in the Twenty-first Century by Robert F. Smylie

The quest for political security can become a danger to religious communities if their values are subordinated or manipulated by the state for its own purposes.

Robert F. Smylie served from 1975 to 2002 as the Presbyterian Church’s representative to the United Nations. Following his retirement, he worked as the director of the Disarmament Program of the World Conference of Religions for Peace. He has been a visiting professor at the Ecumenical Institute in Geneva, Switzerland, and a faculty fellow at New College, Edinburgh, Scotland.

Reflections on an Article 9 Without Borders by Chuck Overby

An outspoken American critic of the U.S.-led “war on terrorism” offers his strongly felt views on the need to protect Japan’s postwar Constitution for the benefit of the entire globe.

Chuck Overby, Ph.D., has been a faculty member at the University of Wisconsin, Madison; Ohio State University, Columbus; and Ohio University, Athens. He is presently an emeritus professor in engineering at Ohio University. He founded the Article 9 Society in 1991 and has since made many lecture trips to Japan and around the world in support of Article 9’s wisdom.

At the time of the Persian Gulf War in 1991 after Iraq invaded Kuwait, Rissho Kosei-kai’s founder and then president, the late Rev. Nikkyo Niwano, was interviewed about Japan’s postwar Constitution by the organization’s Japanese-language magazine Yakushin. An extract from that interview follows.

All Are Precious by Nichiko Niwano

When we realize that our own life is precious, we also will realize that the lives of others are equally precious.

The Diamond and the Lotus by Notto R. Thelle

The truth is like a diamond. It is perfect, like the most precious stone, and cuts through lies and falsehood.

The Sutra of the Lotus Flower of the Wonderful Law Chapter 13: Exhortation to Hold Firm (1) by Nikkyo Niwano

This is the ninety-second installment of a detailed commentary on the Threefold Lotus Sutra by the late founder of Rissho Kosei-kai, Rev. Nikkyo Niwano.