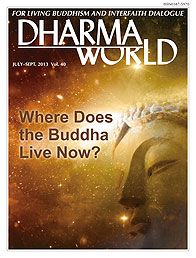 Where Does the Buddha Live Now?

Buddhism was founded twenty-five hundred years ago in India by Siddhartha Gotama, who attained supreme enlightenment to the Dharma, or the Truth, the knowledge of which can liberate all people from suffering. He preached the Dharma for forty-five years, helping countless people find spiritual liberation, until his death at the age of eighty.

The Lotus Sutra, however, reveals that Shakyamuni is not really dead, but that he entered nirvana and is the Eternal Buddha, who is everywhere. His entry into nirvana is a skillful means that encourages us to follow in his footsteps. He is like the benevolent fathers depicted in the sutra’s parables and is always with us, wishing all of us to attain the supreme enlightenment he did.

However, in our turbulent times, 2,500 years since the time of the historical Buddha, it is especially hard to sense the existence of the Eternal Buddha. Some people, overwhelmed by skepticism, have no belief in the divine. This issue will offer advice on how to seek the Buddha.