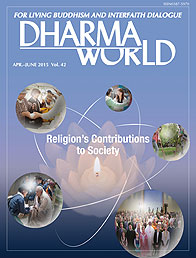 Active Faith and Contributing to Society by Hiroyuki Nasu

Amid the chaos and suffering in Japan that followed World War II, even the sick were unable to obtain proper health care, prompting Rissho Kosei-kai to establish Kosei General Hospital in 1952. The organization has since continued to broaden its contributions to society to meet changing social needs. For example, it established schools and centers of research and launched the Brighter Society Movement. All these activities are based on the organization’s founding spirit of liberating people from suffering and restoring the world in accordance with the true spirit of Buddhism as epitomized in the Lotus Sutra.

Hiroyuki Nasu is head of the Social Ministry Group of Rissho Kosei-kai in Tokyo.

Faith-Based Organizations’ Contributions to Society, Past and Present by Kenji Ishii

Whether the activities of faith-based organizations acting as public-interest groups evolve to become more public serving in character, or else sink into the egoism of organizational activity, will serve as an important indicator for gauging the future of Japanese culture.

Kenji Ishii is Dean of and Professor in the Faculty of Shinto Studies at Kokugakuin University in Tokyo. He specializes in religious studies and the sociology of religion. He is the author of many books on Japanese religion, including Ginza no kamigami: Toshi ni tokekomu shukyo (The gods in Ginza: Religions integrated into the cities) and Sengo no shakai hendo to jinja Shinto (Japan’s postwar social changes and shrine Shinto).

The Role of the American Muslim Community in a Pluralist Setting by Sayyid M. Syeed

The first time that Muslim students abroad saw a new reality of a pluralist democracy was in America, where they were treated as equals and their practice of religion was encouraged.

Sayyid M. Syeed is the National Director of the Islamic Society of North America, heading its Office for Interfaith and Community Alliances in Washington, DC. From 1994 to 2006 he was Secretary-General of the Indiana-based national umbrella organization, which has more than 300 affiliates throughout North America. He was also one of the founders of The American Journal of Islamic Social Sciences and served as editor and then editor-in-chief (1984-94). In recognition of his contribution to interreligious understanding and harmony, he was awarded an honorary doctorate of letters by the Graduate Theological Foundation in South Bend, Indiana, on May 4, 2001.

How Altruism Can Solve Religious Conflict by Rey-Sheng Her

The spirit of Tzu Chi is one example that supports the idea that altruistic voluntarism is stronger than religious belief. . . . Altruistic activities and experiences have resulted in mutual acceptance and understanding between different religions and lessened the conflict between them.

Rey-Sheng Her is Spokesman and Director of Cultural Humanity Development of the Tzu Chi Foundation, Associate Professor in the Institute of Religion and Humanity at Tzu Chi University, and a PhD candidate of the Philosophy Department of Peking University. He is the author of The Philosophy and Practices of Buddhist Tzu Chi and The Moment of Inspiration and is the producer of the documentary The Great Love as a Running Water, which won a best documentary Emmy Award.

Religious Altruism and Its Contribution to Society by Keishin Inaba

Only when activities are publicly performed will the practical effects of social contributions by people of faith elicit society’s sympathy. And only when the logic of altruism is communicated to the world in a way that transcends the boundaries of each religion will it create bridging social capital that can link people.

Keishin Inaba is an Associate Professor in the Graduate School of Human Sciences at Osaka University. He received his PhD in the sociology of religion from the University of London and is the author of several English and Japanese books on religion and altruism. He chairs the board of a Japanese-language digital journal on religion and social contributions and is one of the organizers of the Japan Religion Coordinating Project for Disaster Relief.

North American Buddhist Support for Same-Sex Marriage: An Example of Compassion in Action by Jeff Wilson

There is a venerable religious tradition that provided sanction for same-sex marriages long before they were legally recognized. That tradition is Buddhism.

Jeff Wilson is Associate Professor of Religious Studies and East Asian Studies at Renison University College, an affiliate of the University of Waterloo, Ontario, Canada. He earned his PhD in religious studies at the University of North Carolina. He specializes in Buddhism in North America and is the author of many publications on such topics as abortion rituals in Western Buddhism and Buddhist pluralism in the United States.

I am convinced . . . that we, the members of different faiths, can collaborate in our actions for a better, more human world and learn, at the same time, from each other’s beliefs.

Rev. Vicente Bonet, SJ, came to Japan from his native Spain in 1960. He was a Professor of Philosophical Anthropology, Human Rights, and Social Doctrine at Sophia University, Tokyo until 2007, where he is now a Professor Emeritus. In 2007-12 he taught social problems and Christian humanism at Caritas Junior College, Yokohama. He is the representative of the Association for Solidarity with People of Cambodia (http://www.camboren.org/) and is a staff member of the Tokyo Jesuit Social Center (http://www.jesuitsocialcenter-tokyo.com/).

Shining Our Light on Others by Nichiko Niwano

Nichiko Niwano is president of Rissho Kosei-kai and an honorary president of Religions for Peace. He also serves as special advisor to Shinshuren (Federation of New Religious Organizations of Japan).

The Lotus Sutra from Below by Gene Reeves

To see the Lotus Sutra from below is to see it not so much as a protection for the nation and those who most benefit from social stability as it is to see it as at least partially subversive, from a perspective that would advocate dramatic change in society and inevitable overturn of powerful elites, both secular and monastic.

Gene Reeves has researched and lectured on the Lotus Sutra worldwide for more than a quarter century. He was a visiting professor at Peking University and a professor at Renmin University of China in Beijing until retiring in 2012, and he serves as an international advisor to Rissho Kosei-kai. His recent works include The Lotus Sutra and The Stories of the Lotus Sutra (Wisdom Publications, 2008 and 2010).

Prism of the Lotus Sutra

This is the 120th installment of a detailed commentary on the Threefold Lotus Sutra by the founder of Rissho Kosei-kai, Rev. Nikkyo Niwano.