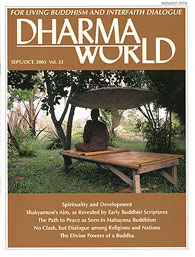 Michio T. Shinozaki is president of Rissho Kosei-kai’s Gakurin Seminary. He received a Ph.D. in Religious Studies from Vanderbilt University in 1988.

All Are Precious by Nichiko Niwano

The Buddhist Community: An Ideal Society by Nikkyo Niwano

John Clammer is professor of sociology at Tokyo’s Sophia University, where he teaches the sociology of development and courses in social inequality, contemporary social theory, and the sociology of the arts. He has previously taught at universities in the United Kingdom, Germany, Australia, Argentina, and Singapore. He has written extensively on the issues of development, and his books include Values and Development in Southeast Asia, Diaspora and Identity, and most recently, with Sylvie Poirier and Eric Schwimmer, Figured Worlds: Ontological Obstacles to Intercultural Relations.

These sources are the only clues we have to the Buddha’s life and thought, since he left no writings of his own, even though they may be colored by the viewpoints of later generations.

Shoji Mori, professor at Toyo University, is the former dean of the Faculty of Literature there. He also serves as director of the university’s Institute of Oriental Studies. His recent books include Shoki bukkyo kyodan no un’ei rinen to jissai (Theory and Practice in the Administration of Early Buddhist Communities) and Bukkyo-teki mono no mikata–Bukkyo no genten o saguru (A Buddhist View of Things: In Search of the Origin of Buddhism).

The author sees a peaceful society as one in which all people can be their own protagonists, as it were, and can fully achieve self-realization.

No Clash, but Dialogue among Religions and Nations by Hans Kung

This article is the text of the keynote address delivered in May at the Niwano Peace Foundation Symposium in Kyoto by the recipient of the 22nd Niwano Peace Prize.

Hans Kung, a world-renowned Roman Catholic theologian, is president of the Global Ethic Foundation in Germany and Switzerland. Until his retirement in 1996, he was professor of ecumenical theology and director of the Institute for Ecumenical Research at the University of Tubingen. He is coeditor of several journals and has written many books. Dr. Kung’s advocacy of a “Global Ethic” as a way of realizing world peace has won him recognition around the world. He is the recipient of the 22nd Niwano Peace Prize.

The Divine Powers of a Buddha by Gene Reeves

The divine powers of a Buddha are said to be ten in all, five having to do with the past, and five with the future, the latter being understood as consequences of the former being widely implemented.

The Lotus Sutra and Tendai by Stephen Covell

Stephen Covell is an assistant professor at Western Michigan University in Kalamazoo, teaching comparative religion. Until the summer of 2003 he was a visiting scholar at the University of Tokyo, where he was working on a project concerning Buddhism and morals education in Japan. He received his Ph.D. from Princeton University in 2001. He is the author of Japanese Temple Buddhism: Worldliness in a Religion of Renunciation (University of Hawaii Press).

Exploring the Methods of Socially Engaged Buddhism by Jonathan Watts

Jonathan Watts is a research fellow at the Jodo Shu Research Institute at Zojoji in Tokyo. He is also coordinator for Think Sangha, a socially engaged Buddhist think tank affiliated with the Buddhist Peace Fellowship in the United States and the International Network of Engaged Buddhists.

The Beginnings of the Buddha’s Deification (2) by Hajime Nakamura

In the final installment of his distinguished biography, the author describes in detail the process by which Gotama came to be seen more as a deity with supernatural powers and less as a man.

The Sutra of the Lotus Flower of the Wonderful Law
Chapter 10: A Teacher of the Law (3) by Nikkyo Niwano

This is the eighty-fourth installment of a detailed commentary on the Threefold Lotus Sutra by the late founder of Rissho Kosei-kai, Rev. Nikkyo Niwano.