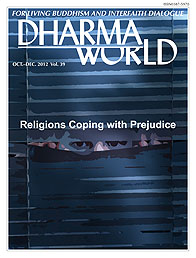 Webster’s New World Dictionary defines prejudice as a judgment or opinion formed before the facts are known, and it implies a preconceived and unreasonable judgment or opinion, usually an unfavorable one marked by suspicion, fear, or hatred.

The classic social-psychological definition of prejudice is the one put forth by Gordon Allport in 1954, which explains, “Prejudice is an antipathy based on faulty and inflexible generalization. It may be felt or expressed. It may be directed toward a group or an individual of that group.

Prejudice can be based on various factors, and some of the most well-known types of prejudice include religious prejudice. A recent (2009) analysis by the Gallup Center for Muslim Studies (of a survey based on telephone interviews) shows that 43 percent of Americans admitted to feeling at least “a little” prejudice toward Muslims. In Japan, religions, especially new religions, sometimes arouse suspicion or even fear.

Many people’s attitudes toward particular religions are based on stereotypes, such as that some religions encourage violence or exploit people for their influence or wealth. These stereotypes are sometimes reinforced by media reports of religion-related incidents, such as terrorism and fraud.

It is also true that some religions have allowed or promoted discrimination based on gender, ethnic background, or sexual orientation. Also, while many religions teach tolerance and compassion for those who are different, these teachings are ignored by extremists who exploit prejudices to promote hatred and violence.

The feature pages will address how religions cope with the problem of prejudice, examining how prejudice occurs, how it affects understanding of other people, how it impedes interfaith dialogue, and in what way it could be replaced by tolerance and compassion, thereby contributing to the peaceful coexistence of all people and religions.