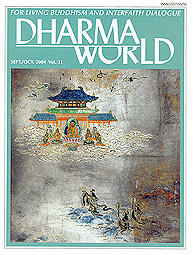 The Increasing Importance of Dialogue and Cooperation

Michio Matsubara is the director of the External Affairs Department at Rissho Kosei-kai’s headquarters in Tokyo.

Bringing Out the Best in Each of Us

An Interview with Bishop Gunnar Stalsett

The Right Reverend Gunnar Stalsett, Bishop of Oslo of the Church of Norway and formerly a member of the Nobel Peace Prize Committee, was in Tokyo in May to attend the presentation ceremony of the 21st Niwano Peace Prize as the chair of the Selection Committee of the prize. At that time, DHARMA WORLD interviewed Bishop Stalsett on the responsibility common to people of faith when the threat of terrorism continues in many parts of the world. Bishop Stalsett has also been actively involved in efforts for reconciliation and peace building as a president of the World Conference of Religions for Peace and co-chair of the European Council of Religious Leaders.

The principles of liberty and justice for all as articulated in the U.S. Declaration of Independence resonate strongly with the Mahayana ideal of universal liberation.

Taigen Dan Leighton is a priest in the Soto Zen lineage and Dharma heir of Shunryu Suzuki Roshi. He teaches at Graduate Theological Union in Berkeley, California. Rev. Leighton is author or cotranslator of several books, including Faces of Compassion: Classic Bodhisattva Archetypes and Their Modern Expression; Dogen’s Extensive Record; and The Wholehearted Way. He leads the Mountain Source Sangha meditation groups in the San Francisco Bay Area.

Our World, Our Jewel: Engaged Buddhism and the Lotus Sutra by Bret Lortie

Although the sutra does not contain specific instructions for changing the world, its liberation theology has spawned many social reform movements, especially in Japan.

Bret Lortie is the managing editor of the Bulletin of the Atomic Scientists, a student at Meadville/Lombard Theological School in Chicago, and a candidate for the Unitarian Universalist ministry.

Systematic training in the open exchange of ideas between Christianity and East Asian faiths is offered by the Interreligious Studies in Japan Program being conducted in Kyoto.

Martin Repp is a theologian from Germany who worked at the NCC (National Christian Council in Japan) Center for the Study of Japanese Religions in Kyoto as associate director and editor of its journal, Japanese Religions (1991–2002), and as coordinator of the Interreligious Studies in Japan Program (ISJP, 2002–4). In 2004 Dr. Repp became professor of theology and comparative religion at the Graduate School for Pure Land Buddhist Studies of Ryukoku University in Kyoto.

This unusual and charismatic clergyman preaches the importance of being open to, listening to, and learning from, the spiritual traditions of others.

Eva Ruth Palmieri, who lives in Rome, worked for the Embassy of Israel to the Vatican for several years and has a deep personal interest in interreligious dialogue.

The following is the text of the address delivered by Rev. Niwano at a Buddhist-Christian symposium held at Castel Gandolfo in Italy, April 23–28. Noting that “compassion begins with unselfish consideration for others,” he concludes that the ultimate goal is for all human beings to attain happiness.

The Danger That Democracy Faces? by Nikkyo Niwano

This essay is part of a continuing series of translations from a volume of inspirational writings by the late founder of Rissho Kosei-kai. DHARMA WORLD will continue to publish these essays because of their lasting value as guidance for the practice of one’s faith in daily life.

The Dragon Princess by Gene Reeves

In this tale, the Lotus Sutra teaches us that women are as capable of becoming fully awakened buddhas as men; it also forces us to challenge our own assumptions about gender and gender roles, and shows us that each and every one of us is already a buddha in the process of becoming.

From a childhood filled with fear and distrust of others, one woman became aware, through the Buddha and others, that she does not live in isolation but is supported by many people who care.

Rika Fujii is a member of the Kita Hiroshima Branch of Rissho Kosei-kai in Hiroshima Prefecture.

The Mainstay of My Life by Michihiro Mochizuki

Taking things for granted, we can fall into the habit of doing things only because they have to be done. One man caught himself doing this and was able to renew his work with a loving, caring spirit.

Michihiro Mochizuki is a member of the Kofu Branch of Rissho Kosei-kai in Yamanashi Prefecture.

The Buddha’s Death Is Mourned by Hajime Nakamura

The early Buddhist texts tell us that the disciples grieved over the death of their master. But the Buddha’s passing was one with the natural law to which all living beings are subject. It was not a retribution for sin or an atonement for the sins of others. It was simply a manifestation of the law of impermanence.

The Sutra of the Lotus Flower of the Wonderful Law
Chapter 8: The Five Hundred Disciples Receive the Prediction of Their Destiny (2) by Nikkyo Niwano

This is the seventy-eighth installment of a detailed commentary on the Threefold Lotus Sutra by the late founder of Rissho Kosei-kai, Rev. Nikkyo Niwano.