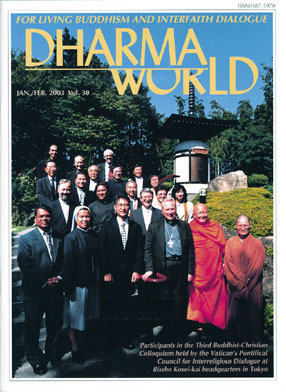 The new information technology has now enabled the exploration of various spiritual paths and traditions free of both the direction of a priestly class of religious professionals and the control and constraints of religious institutions.

Mark R. Mullins is professor of religion in the Faculty of Comparative Culture, Sophia University. He has published widely on the transplantation and indigenization of world religions and the role of new religious movements in modern societies. He is the author and coeditor of a number of books, including Religion and Society in Modern Japan, Christianity Made in Japan, and Religion and Social Crisis in Japan.

The Roots of Japanese Spirituality: A Linguistic Exploration by Toji Kamata

Going beyond views of spirituality as the source of wisdom and compassion, this essay describes it as the compass of life, the fundamental power and orientation directing and driving life, and the indicator and magnetic needle of life.

Toji Kamata is a professor at the Kyoto University of Art and Design and a member of the board of directors of the Association for Shinto and Religious Studies. He received his Litt.D. from the University of Tsukuba. He is the author of numerous books on religion, folklore, and spirituality. He also composes songs on Shinto themes, which he performs in live concerts.

In the new public sphere, each individual is supposed to have an image of the ideal society and possess personal aspirations, to link up with others, and work for a better society.

Tomoya Kaji is professor of urban management and local government at Meiji Gakuin University. Previously, he was a visiting fellow at Princeton University (1997–99). He has served in many consultant positions to the United Nations and to Japanese governments at various levels and has written extensively on issues related to urban government and management.

A Vision of the Religion of the Future by Soho Machida

Belief in a God with a specific name and attributes will one day be replaced by a deepening belief in Something Great that is the cosmic will, and the distinction between monotheism and polytheism will become irrelevant.

Soho Machida spent twenty years as a Zen monk at Daitokuji monastery, Kyoto, before moving to the United States, where he received a master’s degree in theological studies from Harvard University and a Ph.D. from the University of Pennsylvania. He has taught at Princeton University and the National University of Singapore, and is now a professor at the Tokyo University of Foreign Studies. He has written extensively on religion and ethics.

A Reflection: Religion and Science in Global Society by Kuniko Miyanaga

Kuniko Miyanaga is a social anthropologist. At present she is a visiting associate in research at the Edwin O. Reischauer Institute of Japanese Studies, Harvard University. She received a Ph.D. in anthropology from the University of British Columbia in 1983 and taught as a professor at International Christian University, Tokyo, until 2001. She is the author of several books on the theme of globalization and identity.

War, Environmental Destruction, and Religion: The Spiritual World of Hayao Miyazaki’s Nausicaa of the Valley of the Wind by Martin Repp

Martin Repp holds a Th.D. from Marburg University and a postgraduate title (Habilitation) from Heidelberg University. From 1991 to 2002 he was associate director of the NCC (National Christian Council in Japan) Center for the Study of Japanese Religions, in Kyoto, and editor of its journal, Japanese Religions. Since 2002 he has been coordinator of the Interreligious Studies in Japan Program at the NCC Center. In 2004 he became professor of comparative religion and theology in the Graduate School of Jodo-shinshu Studies of Ryukoku University.

Learning throughout Life by Nichiko Niwano

Although birth, aging, sickness, and death are the human lot, the younger generation tends to have a strong aversion to thoughts of aging. Meanwhile, more and more mature people are perplexed about how to live after retirement. What can we do to age in a fulfilling way?

Achieving Peace in a Globalized World by Nikkyo Niwano

The Jewel in the Topknot by Gene Reeves

The Buddha has given many gifts and treasures, many sutras, and many practices, but there is one that stands above all the others–the Lotus Sutra.

A Japanese member of Rissho Kosei-kai now living in the United States addressed the Los Angeles branch meeting on June 27, 2004, the day the organization’s president, Rev. Nichiko Niwano, visited the branch. This is a slightly edited version of her talk.

Noriko LaMar is director of the English Group at Rissho Kosei-kai of Los Angeles.

One man came forth to mediate among the groups disputing to receive the relics, saying he would divide them fairly among the Buddha’s followers.

The Sutra of the Lotus Flower of the Wonderful Law
Chapter 8: The Five Hundred Disciples Receive the Prediction of Their Destiny (4) by Nikkyo Niwano

This is the eightieth installment of a detailed commentary on the Threefold Lotus Sutra by the late founder of Rissho Kosei-kai, Rev. Nikkyo Niwano.