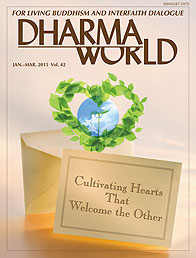 Cultivating Hearts That Welcome the Other

The United Nations proclaimed 2001 as the “United Nations Year of Dialogue among Civilizations,” expressing its firm determination to facilitate dialogue to build mutual understanding and tolerance among peoples of different cultural backgrounds, through active exchanges of ideas, visions, and aspirations.

The new century opened with a “War on Terror,” however. Confrontations over racial, ethnic, and religious differences have worsened since the end of the Cold War and have raised tensions in many parts of the world.

Under such circumstances, leaders of world major religions have continued to call attention to ethnic and religious-based fear and distrust, which take the form of intolerance, and too often violence. They convened in November 2013 in Vienna the ninth World Assembly of Religion for Peace, whose main theme was “Welcoming the Other—A Multi-Religious Vision of Peace.”

They discussed how to eliminate all forms of the negative images of “the other” and prejudice that sees “the other” as enemies or threats, and how to transform intolerance into mutual understanding, thereby revering the worthiness of “the other.”

To achieve this aim, the religious leaders focused on the role of education to share the idea of “welcoming the other” with members of their religious communities.

We believe there can be joy in living in harmony with “the other” through each and every individual’s deep understanding of all people’s virtues and values and through sincere interaction. It may be also true that “welcoming the other” needs spiritual transformation to live in harmony with those who antagonize us and those who have put harm on us.

“Welcoming the other” is a radical challenge for people of faith dedicated to the cause of world peace. We would like to know how religious communities can be guided in facing this most timely challenge, and how they can foster a culture of dialogue that will enable all people of faith to cultivate the hearts that welcome “the other.”