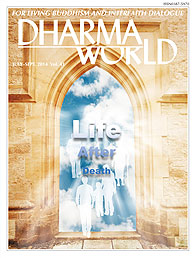 What happens to us after we die? Various religions have described life after death as a spiritual realm, such as heaven and hell, the Pure Land, or transmigration. Many people’s views of life and death are based on one or more of these concepts.

Some people, however, who believe only what can be proved scientifically, regard those concepts as superstition. The renowned physicist Stephen Hawking, in dismissing the possibility of afterlife, said, “I think the brain is like a program in the mind, which is like a computer, so it’s theoretically possible to copy the brain on to a computer and so provide a form of life after death. However, this is way beyond our present capabilities. I think the conventional afterlife is a fairy tale for people afraid of the dark.”

In Japan many people of faith, both clergy and lay people, helped relieve the victims of the massive earthquake and tsunami in March 2011. Many of the victims lost loved ones. People whose religion teaches the meaning of death have a role to play in easing the suffering of disaster victims by listening to their accounts of losing loved ones.

Life after death is beyond the realm of science, and its existence is doubtful. It is a fact, however, that many people believe in and hope for an afterlife. Some also believe in ghosts and other supernatural phenomena. How do concepts of an afterlife influence our lives? Will traditional religious beliefs in an afterlife continue to influence our views on life and death?