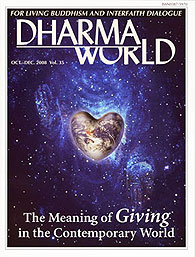 The Meaning of Giving in the Contemporary World

One aspect of the true nature of giving is renunciation of the ego that is at the root of suffering. Giving is necessary, however, for more than just freedom from attachments.

Yuji Numata is director of the Dharma Missions of Rissho Kosei-kai at its headquarters in Tokyo.

The Enigma of Giving by Brook Ziporyn

Do we really possess anything in the way we assume? Basic Buddhism says we do not. The act of giving turns our sense of control against itself.

Brook Ziporyn is associate professor of religion and philosophy at Northwestern University, Evanston, Illinois. He earned his PhD in Chinese philosophy at the University of Michigan and specializes in Chinese Buddhism, Taoism, and Confucianism. His published books in intellectual history, religion, and philosophy includeBeing and Ambiguity: Philosophical Experiments with Tiantai Buddhism.

The “Economics of Giving”: An Interface of Varying Perspectives by Lilian J. Sison and Jaime M. Jimenez

“Giving” is perhaps the expression that exemplifies social accountability and responsibility to other people regardless of their political, social, economic, and cultural background. The act of giving, however, is governed by varying motives, driven by myriad factors, and shaped by different realities.

Lilian J. Sison is the dean of and a professor at the Graduate School of the University of Santo Tomas in Manila. She holds a PhD in chemistry. She is also the secretary general of the Asian Conference of Religions for Peace in the Philippines. Jaime M. Jimenez, PhD, is associate professor of development studies, Asian studies, and political science in the Graduate School and the Faculty of Arts and Letters at the University of Santo Tomas.

The Meaning of Giving in the Contemporary World by Kenichi Otsu

Important changes have taken place in churches’ thinking about giving and receiving, with new emphasis on the causes of poverty in Asian and African nations.

Kenichi Otsu, a minister of the United Church of Christ in Japan, worked as executive secretary of the Christian Conference of Asia. From 1994 he served for nine years as general secretary of the National Christian Council in Japan; currently he is the council’s acting general secretary. He also serves as chair of the Public Relations Committee of the Japanese Committee of Religions for Peace.

Generosity in Christianity and Pali Buddhism by Elizabeth J. Harris

In this article I will explore what Christianity and Buddhism, particularly Theravada Buddhism, say about generosity and self-giving. I will do this in the light of our current global crisis, which is worsening because of our inability to share resources equitably.

Elizabeth J. Harris is a senior lecturer in the comparative study of religion at Liverpool Hope University. She has been involved in Buddhist-Christian encounter for over twenty years and has written extensively. Her latest book is Theravada Buddhism and the British Encounter: Religious, Missionary and Colonial Experience in Nineteenth Century Sri Lanka (London: Routledge, 2006).

The Concept of Giving in a Multireligious Perspective by Jacqueline Rougé

All religions stress the need to effectively attend to the needs of others. Giving is not advocated for its own sake but as a way of showing selfless love and sincere compassion to one’s neighbor.

Words of Encouragement by Nichiko Niwano

Being careful in the words we use toward each other teaches consideration for the importance and value of each and every life.

Giving: Basis for a Culture of Solidarity and Foundation Stone for a Global Ethic by Günther Gebhardt

Giving can serve merely to pacify one’s conscience when actually it is necessary to do more.

Günther Gebhardt, a Christian theologian, was secretary-general of the World Conference of Religions for Peace Europe in Geneva from 1984 to 1997. Since 1998 Dr. Gebhardt has been the senior advisor at the Global Ethic Foundation in Tübingen, Germany.

On July 2-3, the Japanese Committee of the World Conference of Religions for Peace (Religions for Peace Japan) convened the World Religious Leaders Summit for Peace in Sapporo, Hokkaido, with the cooperation of its international body of Religions for Peace. The conference was held shortly before the summit of the Group of Eight leading industrialized nations (G8) held July 7-9 by Lake Toya near Sapporo. The religious summit was attended by about three hundred religious leaders, including one hundred delegates, from twenty-three countries and regions. The participants discussed pressing global issues and worked out a statement to the G8 leaders, which lists areas of concern that they requested the G8 Summit to discuss or tackle in its action plans. Following is the text of the statement, which is entitled “Call from Sapporo: World Religious Leaders Summit for Peace.”

Health, Disease, and Healing: The Buddhist Contribution by Pinit Ratanakul

Understanding health only in relation to particular parts of the human organism is unacceptable to Buddhism. In the Buddhist holistic perspective, disease is the expression of the disturbed harmony in our life as a whole.

Pinit Ratanakul, who received his PhD from Yale University, is professor of philosophy and director of the College of Religious Studies at Thailand’s Mahidol University. He is the author of Bioethics: An Introduction to the Ethics of Medicine and Life Science and coeditor of A Cross-Cultural Dialogue on Health Care Ethics. He has published widely on bioethics from Theravada Buddhist perspectives.

What a Friend We Have in Jesus… by Notto R. Thelle

Many Japanese Buddhists seem to find in the life of Jesus a radiant model of all they have dreamed of, all they have sought after, because he lived the love that freely gives its life for others.

A View of Eternal Life by Nikkyo Niwano

The Sutra of the Lotus Flower of the Wonderful Law Chapter 14: A Happy Life (1)
by Nikkyo Niwano

This is the ninety-fourth installment of a detailed commentary on the Threefold Lotus Sutra by the late founder of Rissho Kosei-kai, Rev. Nikkyo Niwano.