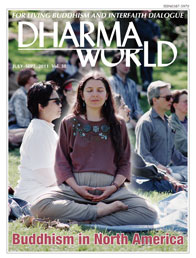 The number of Buddhists has steadily increased in the United States in recent years to an estimated three million. According to Amerika Bukkyo, a book in Japanese by Professor Kenneth Tanaka (2010), despite the fact that only 1 percent of the US population is Buddhist, about 12 percent, or 25 million people, said in a survey (Wuthnow and Cage, 2004) that their own religious faith and spirituality had been greatly influenced by Buddhism. In this special issue, we would like to examine what it is in Buddhism that is having such a great influence on North American society.

Such characteristics of Buddhism in the United States as the insistence on equality and non-hierarchical relationships, emphasis on meditation and practice, social engagement, weaker sectarian consciousness, and the tendency toward privatized religion, seem to show a direction that Buddhism can take not only in the North America, but also, at least in part, in Asian countries like Japan in the future. How does Buddhism change through its adaptation to American society, and what can Buddhists in other countries learn from these phenomena?