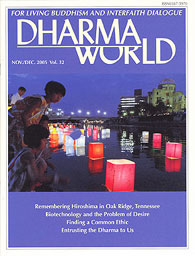 Returning to the Path of “One Truth” by Yoshiaki Sanada

Yoshiaki Sanada is a professor of law who has taught Western legal history and comparative law based on Islamic law at Chuo University’s School of Law in Tokyo. Since 1994 he has been a guest professor at the Institute of Comparative Law of the China University of Politics and Law in Beijing. He is also director of the Peace Research Institute, which is affiliated with the Japanese Committee of the World Conference of Religions for Peace.

A Mind That Seeks the Truth by Nichiko Niwano

The Lotus Sutra’s World View Regarding Peace by Nikkyo Niwano

The Power of Memory and Imagination by Juan Masia

Juan Masia is director of the Institute of Life Ethics at Comillas Pontifical University, Madrid. He was ordained a Roman Catholic priest in Tokyo in 1973, and taught ethical theology and the history of philosophical thought at Sophia University there. Dr. Masia also acts as a special fellow of the Peace Institute affiliated with the Japanese Committee of the World Conference of Religions for Peace.

A large Japanese temple bell now serves as a symbol of peace between the United States and Japan in the city that processed the uranium for the atomic bomb dropped on Hiroshima.

Miriam Levering was educated in history and the comparative history of religion at Wellesley College and Harvard University, where she received her Ph.D. in 1978. She teaches Buddhism, Chinese and Japanese Religion at the University of Tennessee in Knoxville. She has edited a book called Rethinking Scripture, a study of the concept and use of sacred texts in the major religious traditions, and has written many articles on women and gender in Ch’an and Zen Buddhism.

Biotechnology and the Problem of Desire by William R. LaFleur

While appreciating the altruism behind organ donation for transplant surgery, this scholar considers important the Japanese insistence on not overlooking the troubling moral posture of the organ recipient.

William R. LaFleur, the Saunders Professor in Japanese Studies at the University of Pennsylvania, taught earlier at Princeton and UCLA. In addition to studies of medieval Japanese Buddhism, he wrote Liquid Life: Abortion and Buddhism in Japan and is a senior fellow at Penn’s Center for Bioethics. Recently researching the approach to bioethical questions in Japan, he co-edited (with Gernot Bohme and Susumu Shimazono) Dark Medicine: Rationalizing Unethical Medical Research in Germany, Japan, and the United States, to appear in 2007.

The doctrine of the lay Buddhist group could be said to be a fusion of two distinct traditions that emerged during the course of Buddhism’s development and expansion from India to other Asian cultures.

Ranjana Mukhopadhyaya specializes in sociology of religion and Japanese religion. She did her master’s degree in sociology and M.Phil. in Japanese studies from the University of Delhi. In 2003, she received her doctoral degree in religious studies from the University of Tokyo. At present she is an associate professor at Nagoya City University. She has published on Engaged Buddhism, Buddhist ethics, modern Japanese Buddhism, and new religious movements. She is the author of Nihon no shakai sanka bukkyo (Engaged Buddhism in Japan).

A Dialogue between Hans Kung and Nichiko Niwano

The 22nd Niwano Peace Prize was awarded to Dr. Hans Kung, a Roman Catholic theologian and president of the Global Ethic Foundation in Germany and Switzerland. Together with his contributions to interfaith dialogue and cooperation, Dr. Kung’s advocacy of a “Global Ethic” as a way of realizing world peace has won him recognition around the world. In this commemorative dialogue with Rev. Nichiko Niwano, president of the Niwano Peace Foundation, he spoke of two aspects that should serve as signposts in this confused world: a common ethic and a universal sense of values.

Entrusting the Dharma to Us by Gene Reeves

In chapter 22 of the Lotus Sutra, Shakyamuni urges the many assembled bodhisattvas to spread the sutra with all their hearts and make it known far and wide.

The Seeds of Thanksgiving

This article is based upon a testimonial speech given by, and an interview held with, Mr. Hiromasa Igarashi, a man who discovered the seeds of thanksgiving by watching people find happiness through faith.

Hiromasa Igarashi is a member of the Tsuruoka Branch of Rissho Kosei-kai in Yamagata Prefecture.

The Sutra of the Lotus Flower of the Wonderful Law
Chapter 10: A Teacher of the Law (4) by Nikkyo Niwano

This is the eighty-fifth installment of a detailed commentary on the Threefold Lotus Sutra by the late founder of Rissho Kosei-kai, Rev. Nikkyo Niwano.