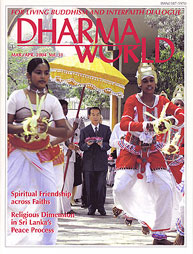 Elizabeth J. Harris is the secretary for interfaith relations for the Methodist Church in Britain, based in London. From 1986 to 1993 she lived in Sri Lanka, where she completed her doctorate in Buddhist studies.

An active worker for domestic peace in his country explains that the civil conflict there is primarily the result of ethnic, not religious, differences.

Jehan Perera is a director of the National Peace Council of Sri Lanka, promoting a negotiated settlement of ethnic conflict in the country. He is also secretary of the People’s Action for Free and Fair Election, an election monitoring organization. He contributes to national newspapers and magazines as a political commentator.

My Way to Refusal by Ishay Rosen-Zvi

Ishay Rosen-Zvi is professor of ancient Jewish literature at the University of Judaism, Los Angeles, and Tel Aviv University. He is a member of Courage to Refuse in Tel Aviv.

It is impossible to construct any permanent, everlasting “self” out of the impermanent conditions that are continually arising and dying. Whether we commit ourselves to becoming arahats or bodhisattvas, may we gain the wisdom that leads to peace. This article was originally an address delivered by Deshabandu Bogoda Premaratne at the Rev. Nikkyo Niwano Commemorative Seminar held by the Inter-faith Foundation of Sri Lanka on October 5, 2003.

Deshabandu Bogoda Premaratne has served as principal of the Royal College, Colombo, and commissioner of examinations for the government of Sri Lanka. He is a founding member of the Sri Lanka Conference on Religion and Peace, affiliated with the WCRP. He served as secretary general of the Asian Conference on Religion and Peace for five years and continues to chair the national chapter.

The True Meaning of Happiness by Nikkyo Niwano

Nikkyo Niwano, the late founder of the Buddhist association Rissho Kosei-kai, was an honorary president of the World Conference of Religions for Peace (WCRP) and was honorary chairman of Shinshuren (Federation of New Religious Organizations of Japan) at the time of his death in October 1999.

The Importance of Character Building by Nichiko Niwano

At a time of international anxiety and tension, society’s first priority should be the right kind of education for the younger generation.

Anyone who explains even one word contained in the Lotus Sutra to another is doing the Buddha’s work, and is considered a Dharma teacher. Not only can we all be Dharma teachers, we can also all become bodhisattvas with the good fortune to one day attain buddhahood.

One Day, One Life–Together with the Sangha by Katsue Hattori

A member of Rissho Kosei-kai learns from her own painful experience that true salvation involves learning the correct way to view ourselves and others.

Katsue Hattori is a member of the Kokura Branch of Rissho Kosei-kai on Kyushu.

The Salutations of the Mallas by Hajime Nakamura

Even though weary from illness, the Buddha did not ignore the bonds of friendship and took steps to extend greetings to old acquaintances.

The Sutra of the Lotus Flower of the Wonderful Law
Chapter 7: The Parable of the Magic City (6) by Nikkyo Niwano

This is the seventy-fifth installment of a detailed commentary on the Threefold Lotus Sutra by the late founder of Rissho Kosei-kai, Rev. Nikkyo Niwano.