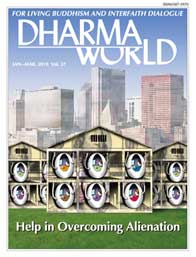 The increasingly widespread incidence of people who are lonely, estranged, and isolated from others is one of the most unhealthy social phenomena that now characterize modern Japanese society. Shifts toward nuclear families, having fewer children, and more frequent divorce are contributing to the ongoing dissolution of traditional Japanese ties among families and local communities. Problems at work or with other interpersonal relationships are forcing many people into a state of spiritual isolation and more of them are suffering from depression. . . .

Kimiko Shinozaki is the director of the Kosei Counseling Institute, which is affiliated with Rissho Kosei-kai in Tokyo.

Religion may in fact help anchor capitalism and trap us in its violent deadlock ad infinitum. Or to be even more blunt, to be truly against capitalism one must be against certain religious practices and thoughts.

Sulak Sivaraksa is the founder of the International Network of Engaged Buddhists and more than a dozen other international organizations. He was a Thai Buddhist monk for two years, and then completed his higher education in Great Britain, where he also worked as a writer and commentator for the BBC. He is considered by many to be the intellectual voice of his generation in Asia and has published numerous books and monographs, including Seeds of Peace: A Buddhist Vision for Renewing Society.

The Dharma of Alienation by David R. Loy

New media technologies sometimes encourage a kind of “hyper-individualism” because we spend less and less time meeting and interacting with other people – often not even with members of our own families.

David R. Loy is Besl Professor of Ethics/Religion and Society at Xavier University in Cincinnati, Ohio. His specialty is comparative philosophy and religion, particularly comparing Buddhism with modern Western thought. His recent books include The Great Awakening: A Buddhist Social Theory and Money, Sex, War, Karma: Notes for a Buddhist Revolution.

How Religion Can Help Overcome Feelings of Isolation by Eric M. Cherry

One way religious communities can address the problem is by developing ministries and disciplines that both fulfill their traditional callings and make use of twenty-first-century communication tools.

Eric M. Cherry has been the director of International Resources for the Unitarian Universalist Association since 2007. He previously served Unitarian Universalist congregations in Burlington, Iowa, and North Easton, Massachusetts. Rev. Cherry is a graduate of Earlham College and Meadville/Lombard Theological School.

From Disparities in Compassion to Mutual Support by Keishin Inaba

Religions can use their “social capital” to promote humanitarian volunteer work, which in turn spreads a spirit of compassion that helps build a society of mutual support.

Keishin Inaba is an associate professor on the Faculty of Human Development at Kobe University. He studied comparative religion at the University of Tokyo and obtained his PhD in the sociology of religion at King’s College, University of London. He is the author of several books in English and Japanese, including Altruism in New Religious Movements: The Jesus Army and the Friends of the Western Buddhist Order in Britain.

Creating Hope by the Way We Live by Robert Traer

Robert Traer served as general secretary of the International Association for Religious Freedom from 1990 to 2000. He is the author of several books, including Faith, Belief, and Religion and Jerusalem Journal: Finding Hope, and co-author of Doing Ethics in a Diverse World with Harlan Stelmach. Dr. Traer teaches courses on ethics and religion at the Dominican University of California in San Rafael.

I Am Always Abiding Here, Teaching the Dharma” by Nichiko Niwano

New Sanghas were also formed in other parts of America, including San Francisco, Seattle, Chicago, and San Antonio, where English-speakers also played active roles in the practice and dissemination of the Dharma. Some of these Sanghas were designated by Rissho Kosei-kai as Dharma centers: San Francisco in 1979, New York in 1982, and Oklahoma in 2007. Rissho Kosei-kai in the United States now comprises eight corporations and 1,742 member households.

The following is the text of President Nichiko Niwano’s address on August 1, 2009, in Las Vegas at the fiftieth anniversary celebration of Rissho Kosei-kai’s successful dissemination activities in the United States.

The following is the edited text of a testimonial speech by a member of Rissho Kosei-kai of New York at the fiftieth anniversary celebration in Las Vegas on August 1.

John Michael Schuh is a member of the Chicago Chapter of Rissho Kosei-kai of New York.

This article is adapted from a talk delivered by the author on August 1, 2009, at a ceremony in Las Vegas commemorating the fiftieth anniversary of Rissho Kosei-kai’s activities in North America. Some parts were also used in a talk given in Tokyo earlier that year.

Dialogue That Opens Us to Others’ Religious Experiences Dr. Cinto Busquet, the author of Incontrarsi nell’Amore (Encounter in Love)

A book in Italian on Rissho Kosei-kai’s Founder Nikkyo Niwano titled Incontrarsi nell’Amore (Encounter in Love) was published in September 2009 by Città Nuova, Rome. Rissho Kosei-kai invited the author, Dr. Cinto Busquet, a Spanish Catholic priest and a member of the Focolare Movement, a Rome-based worldwide Catholic lay organization, to lecture at Rissho Kosei-kai’s headquarters on September 5. After the lecture, DHARMA WORLD interviewed Dr. Busquet on the content of his new book and his thoughts on interreligious dialogue.

To Build a Civilization of Love by Harold Kasimow

The author of this essay feels that the views on interreligious dialogue held by the head of the Roman Catholic Church have been misconstrued. The pope believes that such dialogue may help reduce violence and promote justice and peace, but its ultimate goal is the quest for truth. It must not only be about recognition of similarities, but also about the differences.

Harold Kasimow is George Drake Professor of Religious Studies Emeritus at Grinnell College, Grinnell, Iowa. He is the author of “A Blessing to One Another: John Paul II and Benedict XVI on Judaism and Other Religions” published in The Catholic Church in Dialogue with Islam and Judaism (The Dialogue Series 7), Antwerp: Saint Ignatius University.

The Sutra of the Lotus Flower of the Wonderful Law Chapter 16: Revelation of the [Eternal] Life of the Tathagata (1) by Nikkyo Niwano

This is the one hundredth installment of a detailed commentary on the Threefold Lotus Sutra by the founder of Rissho Kosei-kai, Rev. Nikkyo Niwano.