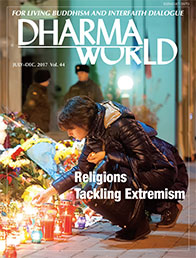 Terrorism incited by religious extremism has made the world unsafe, and no community is safe from terrorism of the kind fomented by ISIS.

Poverty and discrimination have made many people, especially the young, feel that they have no future. Some turn to violence, which they seek to justify by false interpretations of religion.

Genuine religion liberates people from suffering and addresses social injustices. Unfortunately, false religion exploited by extremists only increases suffering, both of the assailants and their victims.

In many parts of the world, claims for narrow national interests gain public acceptance. This trend might further divide many communities and foster exclusiveness, and as a result incite violence among those who feel alienated.

The solution is for religious organizations and communities to work harder to remedy social injustices and inequalities, while tackling the forces that divide the world today and cultivating in people’s minds a reverence for all life.

To find out how to do that, we will feature essays by religious leaders and experts in diverse fields of religious and social studies.