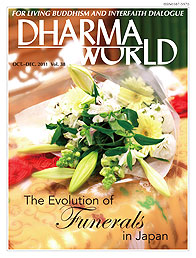 The Evolution of Funerals in Japan

In recent years in Japan, funerals have departed from tradition. The aging of society and the weakening of ties between traditional Buddhist temples and their parishioners have brought about the diversification and simplification of funerals. Many Buddhist temples, which have depended financially on donations received for funerals and memorial services, have had to rethink the meaning of funerals. On the other hand, more and more people have abandoned traditional religious values and sought completely new meaning in funerals.

We will look at the changing forms of funerals in Japan and the meaning of funerals for people today, and what role religion, especially Buddhism, continues to play, the role that it has largely monopolized until today in Japanese society.