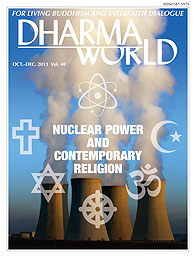 The Great East Japan Earthquake and tsunami that struck with devastating effect on March 11, 2011, wrecked the lives of many people, as well as entire communities. The lives of many individuals and families have also been disrupted by the resulting accident at the nuclear power plant in Fukushima. Radiation contamination forced nearby residents to leave their homes and communities not knowing when they might be able to return. Countless families worry about the possible effects of radiation on their children, born and unborn. The accident has also alarmed people around the world, imposing an incalculable responsibility on future generations.

Nuclear power was once called “the energy of the future,” and the Japanese are among its beneficiaries, but they have largely ignored its potential dangers. The use of nuclear power affects the health of workers in uranium mines and in nuclear power plants. The production of large amounts of high-level nuclear waste places a tremendous burden on the environment, since the waste remains radioactive for millions of years. The Japanese have just learned at first hand the lesson that it takes only one nuclear accident to cause widespread alarm and threaten physical harm.

Since the 2011 nuclear disaster, many religious denominations and new religious movements in Japan have issued statements calling for a world that does not rely on nuclear power. An international interreligious conference was held recently in Fukushima to discuss nuclear power.

Rissho Kosei-kai’s statement of June 2012 urges the need to concentrate knowledge and wisdom on developing and using renewable sources of energy, and above all to reconsider the values and lifestyles that have endlessly escalated energy consumption at the cost of great sacrifice by so many people.

The world needs to stop putting material prosperity, which depends on nuclear power, above all else. We believe religions offer moral principles that can persuade the world to do without nuclear power, and we invite religious leaders and scholars of religion to offer their views on the use of nuclear energy and suggest what religions can do to foster a world where all people live in harmony with each other and the environment.