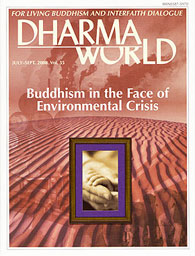 Buddhism in the Face of Environmental Crisis

“Green” Cooperation among Religions: A Proposal by Isao Fukada

The major faiths could work together on the urgent, essential task of protecting and restoring the threatened forests of the world.

Isao Fukada is director of the Ome Retreat Center of Rissho Kosei-kai in Tokyo and is a member of the Commission on Development and Environment of the Japanese Committee of the World Conference of Religions for Peace.

Walking with the Earth: The Environmental Crisis and Buddhist Responses by John Clammer

The good news is that many people as individuals and as parts of organizations of many kinds are beginning to formulate creative responses.

John Clammer is advisor to the rector and director of international courses at the United Nations University headquarters in Tokyo. He was previously a professor at Sophia University, where he taught sociology and Asian studies. His current work involves studies of ecology-society relationships and the contribution of religious thinking to environmental issues. In this latter capacity he is executive director of ecology and sustainable development of Meeting Rivers, an NGO that promotes interreligious dialogue on environmental issues and a sustainable future.

Reintegrating the World in Japanese Buddhist Poetry by Jean-Noël Robert

Human beings who reach enlightenment awaken through themselves the whole surrounding world. This is a daring elevation to its ultimate meaning of an older tenet of Buddhism.

Jean-Noël Robert is teaching in the Department of History of Religions at the Ecole Pratique des Hautes Etudes (Sorbonne, Paris) and is a member of the Academie des Inscriptions et Belles-Lettres. He wrote his doctoral dissertation on Gishin, the second patriarch of the Japanese Tendai school. He recently published a translation of four short treatises on Tendai, Quatre courts traites sur la Terrasse Celeste (Paris, 2007), and a commentary on Jien’s Buddhist poems, La Centurie du Lotus de Jien, will be published this year.

Considering the “Rights of Nature” by Nobuyuki Sato

The concept was originally proposed in the United States as a topic in environmental ethics. Two perspectives must be kept in mind when considering the concept.

Nobuyuki Sato is a professor of law in the Chuo Law School at Chuo University in Tokyo. He received his Ph.D. from Chuo University in 2000. His specialties are legal research, information law, and public law in North America and the United Kingdom. He is coauthor of several books on legal studies, including guides to the Constitution of Japan.

The problem encompasses the entire planet, and the victims are also the perpetrators. Energy-saving technologies developed in Japan can help.

The Greening of Buddhist Practice by Kenneth Kraft

With increased communication and cooperation among Buddhists around the globe, Buddhist-inspired environmentalism is also becoming manifest in national and international arenas.

Kenneth Kraft is a professor of religious studies at Lehigh University in Bethlehem, Pennsylvania. He is a scholar of Japanese Zen and a leading interpreter of contemporary Buddhism. Dr. Kraft’s numerous books include The Wheel of Engaged Buddhism and, as coeditor, Dharma Rain: Sources of Buddhist Environmentalism.

Being Grateful for Our Meals by Nichiko Niwano

Many activities are being launched to teach children how precious our food is and why we should be thankful for it.

Environmental problems are serious because there is no external enemy for us to rally together and fight. We ourselves have been the number-one offenders in bringing about these awful problems.

Mamiko Okada is a professor at the School of Human Science and Environment, the University of Hyogo. She earned a D.Phil. at Bonn University, Germany. She is a trustee of the Japanese Association for Religious Studies and serves as a member of numerous governmental committees. Dr. Okada is actively involved in social activities and is on the Ethics Committee of Western Kobe Medical Center.

The biggest, and in recent years most symbolic, example of our interconnectedness with the planet is climate change.

Margaret Suzuki, who lives in Shikoku, has long been involved in Japan’s environmental movement and works as a translator on environmental issues for nongovernmental organizations, researchers, and government offices. She was coeditor of the Japan Environment Monitor (published 1989?99) and serves on the steering committee of the Japan Wetlands Action Network (JAWAN).

Japanese Buddhists are beginning to make structural changes that have a direct impact upon the environment. “Conservative conservationism” seems to be one model for a hypercapitalist Japan.

Duncan Ryuken Williams, Ph.D., is associate professor of Japanese Buddhism and chair of the Center for Japanese Studies of the University of California, Berkeley. He works primarily on Japanese Buddhist history, Buddhism and environmentalism, and American Buddhism. He is the author of The Other Side of Zen: A Social History of Soto Zen Buddhism in Tokugawa Japan and editor of three volumes, including Buddhism and Ecology: The Interconnection of Dharma and Deeds.

Ridding Ourselves of Greed by Nikkyo Niwano

The Tale of a Modern Pilgrim by Notto R. Thelle

The search for treasure led him back to what he had left behind.

Notto R. Thelle, D.Th., is a professor in the Faculty of Theology at the University of Oslo, Norway. Having studied Buddhism at Otani University in Kyoto, he acted as associate director of the NCC (National Christian Council) Center for the Study of Japanese Religions in Kyoto from 1974 to 1985. He was also a visiting scholar at the center in 1999 and 2000. This essay is a translation from the author’s 1991 book (in Norwegian) whose title translates as “Who Can Stop the Wind? Travels in the Borderland between East and West.”

The Sutra of the Lotus Flower of the Wonderful Law Chapter 13: Exhortation to Hold Firm (3)
by Nikkyo Niwano

This is the ninety-fourth installment of a detailed commentary on the Threefold Lotus Sutra by the late founder of Rissho Kosei-kai, Rev. Nikkyo Niwano.