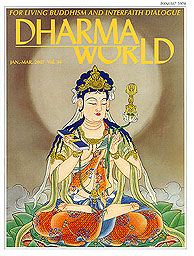 Buddhism is commonly understood as a religion that teaches us how to gain deliverance from delusions and suffering and to attain enlightenment. Of course, this is one of Buddhism’s aims. However, I think it would be a grievous error to assume that it is its only aim. . . .

Norio Sakai, former chairman of Rissho Kosei-kai, is now an honorary executive board member of the organization. He also serves as a trustee of the World Conference of Religions for Peace.

Many of our social problems can be traced back to a group ego when we identify with our own gender, race, nation, religion, and so on.

David R. Loy is Besl Professor of Ethics/Religion and Society at Xavier University in Cincinnati, Ohio. His specialty is comparative philosophy and religion, particularly comparing Buddhism with modern Western thought. His recent books include The Great Awakening: A Buddhist Social Theory.

Martin Buber (1878-1965), the well-known Jewish philosopher of the twentieth century, wrote a fascinating essay on Zen Buddhism and Hasidism in which he tells the tale of Rabbi Eizik, son of Rabbi Yekel, who travels from Krakow to Prague in search of treasure. He ultimately discovers, after meeting with a Christian, that the treasure is in fact buried in his family’s home in Krakow. Thus, it is a member of a different religious tradition who helps Rabbi Eizik to find the treasure in Judaism, to perceive more profoundly the depth and uniqueness of the Jewish tradition. That is precisely the point that Rabbi Greenberg, one of the outstanding rabbis of our generation, makes after meeting with the Dalai Lama. The Dalai Lama himself, whose strong commitment to nonviolence and belief that every human being “can develop a heart of compassion,” has played an instrumental role in attracting many Americans, including many Jews, to the study and practice of Buddhism. . . .

Harold Kasimow is the George Drake Professor of Religious Studies at Grinnell College, Grinnell, Iowa. His latest book is The Search Will Make You Free: A Jewish Dialogue with World Religions.

The Japanese and the Buddhist Home Altar by Kokan Sasaki

It was the grandparents who were most responsible for the culture surrounding the family altar. With the increase in the number of nuclear families, who is looking after the altar and how is it prospering?

Kokan Sasaki, Litt.D., was a professor in the Faculty of Literature at Komazawa University, where he is now professor emeritus. His specialty is religious anthropology and cultural anthropology. His recent books include Butsuriki: Seikatsu bukkyo no dainamizumu (The Buddha Power: Dynamism of Living Buddhism).

The influence of Nichiren’s reading of the Lotus Sutra reached far beyond his lifetime, and in later ages his Buddhism would be taken as a model for active participation in religious, social, and political life.

Lucia Dolce is senior lecturer in Japanese religions at the School of Oriental and African Studies, University of London, where she also directs the Centre for the Study of Japanese Religions. She specializes in Japanese religions and thought, with a particular research interest in the religiosity of the medieval period.

The role played by lay religious movements is valuable, in that they offer people a way to avoid being caught up in the current prejudices about religion.

Masahiro Nemoto, formerly a deputy director of the External Affairs Department of Rissho Kosei-kai, now serves as head of the organization’s Tsuchiura Branch in Ibaraki Prefecture.

Located in a tiny old Quaker settlement in Pennsylvania, this American Buddhist center is attracting increasing interest with monthly weekend retreats for adults and Dharma School for children.

Jacqueline Ruyak lived in Japan for many years. She now divides her time between Pennsylvania and Tono in northeastern Japan. Her essays on religion and Japanese arts, crafts, and social topics appear frequently in Japanese and American magazines. All photos in this article were taken by the author.

The 23rd Niwano Peace Prize was awarded last year to Rabbis for Human Rights, an Israeli group of ordained rabbis and rabbinical students working to defend the rights of both Jews and Palestinians. In May 2006, three representatives of the group, Rabbi Arik Ascherman, executive director, Rabbi Ma’ayan Turner, chairperson, and Rabbi Yehiel Grenimann, treasurer, exchanged views on the sanctity of all human beings in a commemorative dialogue with Rev. Nichiko Niwano, president of the Niwano Peace Foundation.

In chapter 28 of the Lotus Sutra, Universal Sage Bodhisattva promises that if anyone accepts and upholds the Lotus Sutra he will come to that person, mounted on a white elephant with six tusks.

The Buddha’s Path: Between Otherworldliness and Presence by Notto R. Thelle

As we hear the voices of life’s suffering and pain, the vision of unity and interconnectedness expands to become a solidarity that breaks through all barriers to embrace all that suffers.

Notto R. Thelle, D.Th., is a professor in the Faculty of Theology, the University of Oslo, Norway. Having studied Buddhism at Otani University in Kyoto, he acted as associate director of the NCC (National Christian Council) Center for the Study of Japanese Religions in Kyoto from 1974 to 1985, where he was a visiting scholar in 1999 and 2000.

The Lotus Sutra and Lay Buddhist Movements by Daniel Friedrich

The eleventh International Lotus Sutra Seminar was held in Ningbo, Zhejiang Province, China, June 26-29, 2006. The theme of the conference was “The Lotus Sutra and Lay Buddhist Movements: Past and Present.” The Lotus Sutra, as is well known, has had an incredibly vast influence upon Buddhism in East Asia, and the papers presented and the ensuing conversation reflected the great number of ways in which the Lotus Sutra has been understood in East Asia. Given this tremendous diversity, an extended overview of the papers and discussions would be ideal. . . .

Daniel Friedrich had been awarded an M.A. by the Institute of Buddhist Studies/Graduate Theological Union at the time of the Lotus Sutra seminar. He is currently furthering his studies in Sumoto, Hyogo Prefecture.

The Realm of the One Buddha Vehicle by Nikkyo Niwano

The Sutra of the Lotus Flower of the Wonderful Law Chapter 12: Devadatta (1) by Nikkyo Niwano

This is the eighty-ninth installment of a detailed commentary on the Threefold Lotus Sutra by the late founder of Rissho Kosei-kai, Rev. Nikkyo Niwano.