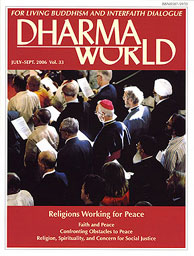 The Eighth World Assembly of the World Conference of Religions for Peace (WCRP VIII) is fast approaching. For the first time in the WCRP’s history, in addition to the plenary and workshop sessions to be held in Kyoto, a World Youth Assembly of the WCRP will also be held in Hiroshima and Kyoto. . . .

Koichi Matsumoto, director of the Youth Division of Rissho Kosei-kai, serves as a vice president of the International Youth Committee of the World Conference of Religions for Peace (WCRP).

The Eighth World Assembly of the World Conference of Religions for Peace will be convened in Kyoto August 26-29, under the main theme of “Religions for Peace: Confronting Violence and Advancing Shared Security.” Dharma World interviewed the secretary-general of the WCRP, Dr. William F. Vendley, who was recently in Tokyo for the preparation of WCRP VIII, about the significance of the forthcoming World Assembly.

William F. Vendley has served as secretary-general of the World Conference of Religions for Peace/International since 1994. Dr. Vendley holds an M.A. in Religious Studies from the Maryknoll School of Theology and a Ph.D. in Systematic Theology from Fordham University.

A distinguished U.S. diplomat graphically demonstrates why it is urgent that the leaders of the world’s major religions put aside their differences and unite in search of peace and disarmament.Ambassador Thomas Graham Jr. is chairman of the board of the Cypress Fund for Peace and Security. Internationally known as one of the leading authorities in the field of international arms control and nonproliferation agreements designed to limit and combat the proliferation of nuclear, biological, and chemical weapons, Ambassador Graham has served as a senior U.S. diplomat involved in the negotiation of every major international arms control and nonproliferation agreement for the past thirty-five years.

Religious Leaders Must Serve as Bridges to Peace by Eiin Yasuda

To construct a peaceful world of happiness for all, we have to begin by creating human beings with righteous hearts.

Ven. Eiin Yasuda is chief abbot of the temple Yakushiji in Nara and chief priest of the Hosso sect of Japanese Buddhism. At present, he also serves as the managing director of the Japanese Committee of the World Conference of Religions for Peace. He has written several books on Buddhism and lectures widely on issues of religion and peace.

Religion and Peace by Fumihiko Sueki

An abstract, universal ideal of peace cannot be successful. Peace must be considered from the standpoint of what sort is desirable and under what conditions.

Fumihiko Sueki obtained his Ph.D. from the University of Tokyo in 1994. Since 1995 he has been a professor in the university’s Graduate School of Humanities and Sociology, where he teaches Buddhism, in particular Japanese Buddhism. He works mainly on the reconstruction of the intellectual history of Buddhism in Japan from ancient to modern times. He is an author of a number of books and articles, and his recent research also covers Zen philosophy and comparative studies of modern Buddhism.

Religions are learning communities. The time has passed when religious communities taught only within their own traditions. The global perspective leads us to transcend such boundaries.

Johannes Lahnemann is professor of religious education (Christian-Lutheran) at the University of Erlangen-Nurnberg in Germany. He is president of WCRP Nurnberg, a member of the Round Table of Religions in Germany, and chairman of the Peace Education Standing Commission (PESC) of the WCRP.

Religion, Spirituality, and Concern for Social Justice by Swami Agnivesh

Training people to practice justice is a basic religious calling. Only true spirituality can lead us out of darkness and untruth to the light of truth and justice.

Swami Agnivesh, who has spearheaded movements for the protection of human rights in India, has served as chairperson of the United Nations Trust Fund on Contemporary Forms of Slavery and of Bandhua Mukti Morcha (Bonded Labor Liberation Front). At present, he also acts as working president of the World Council of Arya Samaj, a Hindu reform organization.

The Realization of True Wealth by Nichiko Niwano

Knowing what is sufficient and being satisfied with it means exercising control over the impulse to give in to our desires, thereby recognizing what is enough for our needs.

Why Interreligious Cooperation Is Essential by Nikkyo Niwano

Where Are You Staying? by Notto R. Thelle

People in the East have a unique awareness of religion as a path. Christianity, however, is the doctrine, not the “Way” of Christ. But perhaps we have transformed Christianity into an exceptionally complicated doctrine.

Notto R. Thelle, D.Th., is a professor in the Faculty of Theology, University of Oslo, Norway. After studying Buddhism at Otani University in Kyoto, he acted as associate director of the NCC (National Christian Council) Center for the Study of Japanese Religions in Kyoto 1974-85, where he was a visiting scholar 1999-2000. He is a widely published author. This essay was translated from one of his books, published in Norwegian.

Aspiring to Right Liberation by Santikaro

Robert D. Larson was a recent university graduate when he joined the U.S. Peace Corps in 1980 and went to Thailand. He was later ordained there, in 1985, as Santikaro Bhikkhu. He studied under the late Ajahn Buddhadasa Bhikkhu (1906-93), the most eminent Theravada monk-teacher in Thailand, translating his discourses and writings into English, leading meditation retreats, and participating in socially engaged Buddhist activities. After his teacher’s death, he returned to America and began a Dhammic community named Liberation Park outside Chicago, where people can pursue the realization of the essence of Buddhist teachings, thus bringing spiritual values back into the modern world. Although he has left the monkhood, Santikaro remains committed to helping transmit Ajahn Buddhadasa’s teachings as true guidelines for human life. Santikaro was recently in Japan, where he spoke of his experience in Thailand and his hopes for sharing the Dhamma among his fellow Americans.

It is a great honor for me to be here to accept the 2006 Niwano Peace Prize on behalf of Rabbis for Human Rights. We feel today both pride and humility before you who have chosen our organization, and before God. I think that we have the right to feel proud of our accomplishments, small as they may be, in a region and a world that is still battered by inhuman conduct. Yet we are humbled by all that remains to be done and by the knowledge that we have not acted, and cannot act, alone. We are thankful for the recognition you have afforded us. Receiving the Niwano Peace Prize encourages, and indeed enables, us to do more. May we, with the help of Heaven, dedicate ourselves to human rights and peace with renewed vigor of spirit and strength of heart. . . .

The name of the most popular of all the Buddhist bodhisattvas can be translated as “Regarder of the Cries of the World.” Associated with both wisdom and compassion, this bodhisattva has many different portrayals and manifestations, both male and female.

The Sutra of the Lotus Flower of the Wonderful Law Chapter 11: Beholding the Precious Stupa (2) by Nikkyo Niwano

This is the eighty-seventh installment of a detailed commentary on the Threefold Lotus Sutra by the late founder of Rissho Kosei-kai, Rev. Nikkyo Niwano.